This may not be art criticism as such, coming as it does in the final days of an exhibition, but it may rather be the question: What will remain after its close? What mark will it leave behind? The Anselm Kiefer retrospective at the Pompidou Centre in Paris will end in a few weeks and all that will be left of the 150 monumental paintings and 40 glass display cases is the question: What happens after Kiefer? It will not be easy for the artistic panorama of the next few years to match the impact of this exhibition. The density of his ashy, cloudy paint remains suspended, living, floating above the Parisian skyline on the sixth floor of the museum. It would seem almost as if the walls of various galleries in the Pompidou have had to be specially reinforced to accommodate the sheer size of these colossal paintings. 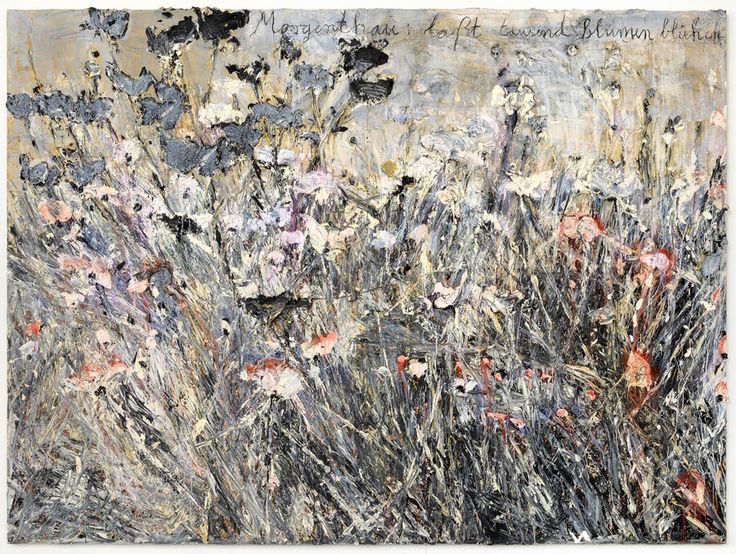 This may not be art criticism as such, coming as it does in the final days of an exhibition, but it may rather be the question: What will remain after its close? What mark will it leave behind?

The Anselm Kiefer retrospective at the Pompidou Centre in Paris will end in a few weeks and all that will be left of the 150 monumental paintings and 40 glass display cases is the question: What happens after Kiefer? It will not be easy for the artistic panorama of the next few years to match the impact of this exhibition. The density of his ashy, cloudy paint remains suspended, living, floating above the Parisian skyline on the sixth floor of the museum.

It would seem almost as if the walls of various galleries in the Pompidou have had to be specially reinforced to accommodate the sheer size of these colossal paintings. Some are of the insides of claustrophobic, totalitarian architectures; some are of snow-covered, bloodstained forests; some are of serpent-strewn pathways named after battles such as Teutoburgo, Varus ... And then there are Kiefer's landscapes: arid, divvied up into motley wrinkles as if they were traintracks leading to cremation ovens, converging into a one-dimensional escape route towards a flattened horizon and a sky that doesn't exist. These are the denunciations of a German artist seeking to make some noise in a world of silence. 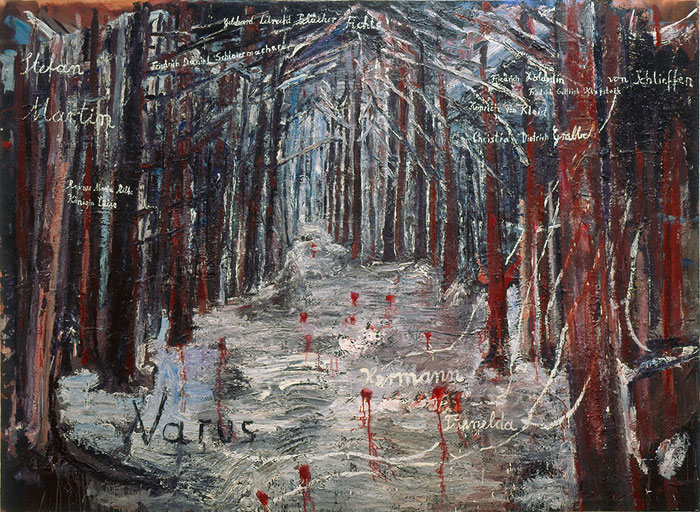 Anselm Kiefer was born in May 1945 in Donaueschingen, a part of the future Federal Republic of Germany, and belongs to that second generation of Germans who grew up without reference to or memories of the Nazi regime. Those were years in which the country's authorities anaesthetised the entire population in an attempt to avoid any sense of responsibility or culpability for the Holocaust and when a layer of charcoal was thrown over the whole of German tradition and its Nazi past to destroy any recollection thereof. Kiefer was born after Auschwitz but wants to live alongside Auschwitz. This is why, after 1970, his work becomes what Daniel Arasse calls "a theatre for memory": to rescue, restructure and represent German identity. From that moment on, Kiefer's mental imaginings become wholly dedicated to the creation of a contemporary version of historical painting.

At this moment, the Pompidou's white ceiling appears lower than is customary, drawn down and diminished by the sheer height of Kiefer's paintings and by the concrete flooring that makes the uniquely artificial light shine like steel. Even the gallery housing the glass display cases is somewhat suffocating, each one squeezed beside the next as if in a dusty old Natural Sciences museum. These object displays are the fruit of Kiefer's accumulation of what he calls the catacombs of his Barjac studio: objects waiting to be converted into messages: pieces of clay, spools of charred film, old typewriters, fossils, twisted lamps and dried flowers. Nothing is thrown away, every material thing has a life, everything is recycled within or into another painting or another sculpture. 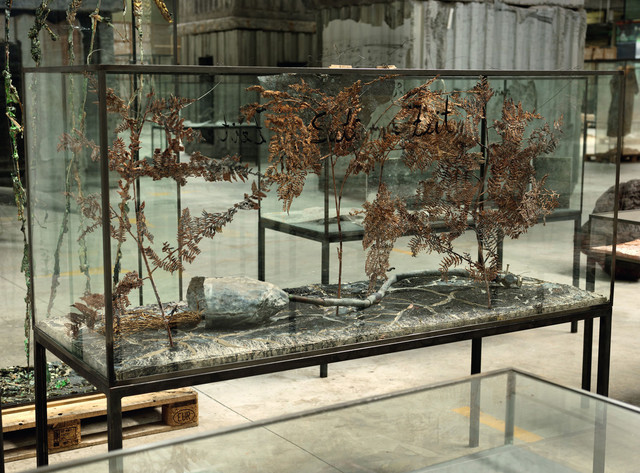 Kiefer excites our sensorial curiosity. And he does so with his pictorial technique: from his choice of materials to the stratification in layer upon layer of them onto a picture painted over what could be any length of time: "My paintings might be compared with the Talmud, with their commentary on commentary, their sedimentation on siltation. If one made a hole in the canvas, the whole history of the painting would be visible, vertically", says Kiefer, who challenges us through the materials, the colours and the condition of his paintings. From the 90's onwards, his works, encrusted with paint, have  been much more than just an image. They are, rather, a journey over deep, rough and uneven terrain that invite us and our puzzled senses to familiarise ourselves with them, to touch the unknown, to feel, to scratch, to smell them almost.

Anselm Kiefer's paintings are not easily approachable, the spectator having to put distance between himself and them by moving away and thereby finding himself looking at completely different dimensions. Kiefer's works since 1980 have aquired titanic proportions perhaps because history is a construction that can't easily be assimilated. All of Kiefer's art impacts us. And this initial impact is to do with the world of sensations, not just that of dimensions. It is an arbitrary division of aesthetic philosophy, Kiefer belonging more to the realm of the sublime than the realm of beauty. Kiefer's work seizes the spectator, obliges her to steel herself, infects her with anxiety and perplexity but also with curiosity. In this sense, Kiefer puts up the same barriers as a German Romantic would. We feel the immensity and vastness of Wagner's Ring Cycle and its tragedy. It also takes us towards solitude, doubt and the same question asked by Caspar David Friedrich's subject, the man wearing a black dress-coat leaning on his walking stick, his back to us facing faraway mountains: The Wanderer Above A Sea Of Fog (1818).

Anselm Kiefer is an all-round artist: painter, sculptor and creator of installation spaces but also, and especially, he is an artisan: blacksmith, miner, carpinter and a landscaper artist living with an intense interior discourse: "My biography is the biography of Germany" he says, but it is also the history of the Jews, Shoah, Kabbala, The Song of Songs, Germanic myths, alchemy and the cosmic vision of Robert Fludd: every heavenly body has its  counterpart in a flower. And books, his library: Heidegger, Walter Benjamin, Hölderlin, then Ingeborg Bachmann and after her, Paul Celan. And after Paul Celan, more Paul Celan. Paul Celan has been deeply imbedded in Kiefer's paintings since 1980 . The latter is a German painter who takes on his country's past by unearthing the Holocaust and who always wanted to be a poet, the former a renowned Jewish-Romanian poet of  the latter half of the 20th century who chose to write the poetry that burned inside him in German, the language of his tormentors.

Is it possible to write poetry after Auschwitz? asks Theodor Adorno. Perhaps there's only room  for silence. But if one chooses the route of not being silent, if one wants to continue to denounce in German, it then becomes necessary to refound that language. For this reason, Celan uses language somewhat secretively. And so, from this union between painter and poet, come entire verses written in Kiefer's looping, joined-up letters, words emerging from black skies to live on in the paintings. And their titles: "For Paul Celan: Ash Flower", because flowers and Celan come together many times in Kiefer's work. 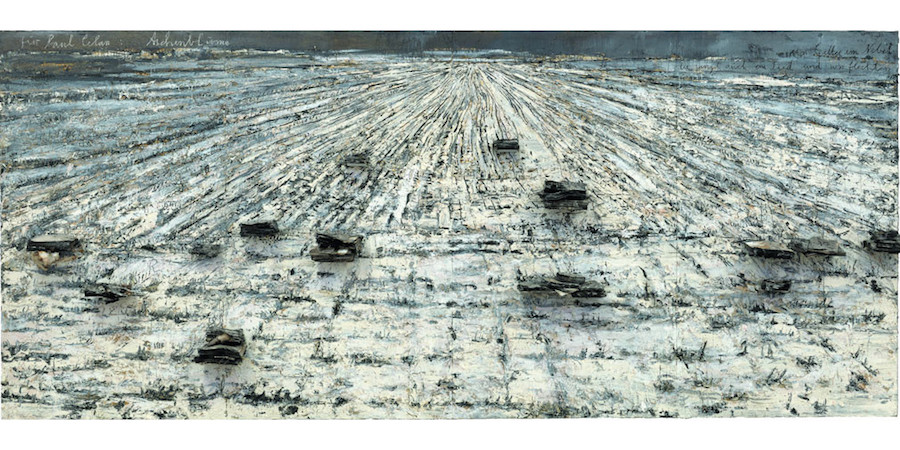 "Your Golden Hair, Margarethe"  is a 1981 painting inspired by Celan's poem "Death Fugue". Kiefer paints, sticks and scratches strange flower-like blades of straw that emerge from the black ground like rays of light tipped with a pink flame. These are Margarethe, representing the German nation with her long golden hair and Shulamith with her burnt, ashen hair representing the Jewish people. These icons of Celan's poetry are represented also in the materials used: straw, ash, hair, sand ... As if the written words themselves had melted onto the surface of the paint. 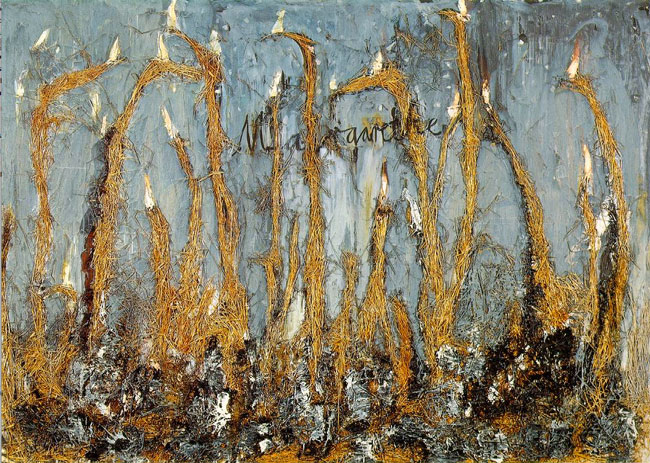 We continue on through the Pompidou. Suddenly and unexpectedly, we enter a different room altogether that is bright, light and flooded with sun and colour. And, we think, cheeriness. There are only four large-scale paintings of flowers here. Why is Kiefer painting flowers? Why has he started planting field-fulls of sunflowers in Barjac where he has his studio? Why are sunflowers gradually invading his paintings and sculptures? Kiefer is once again using painting to challenge and question history. Towards 2010, Kiefer turns to something that happened in the final days of the Second World War ~ The Morgenthau Plan. In order to prevent a post-war Germany from developing a programme of heavy industry and to thwart the threat of her re-arming, the US Secretary of the Treasury, Henry Morgenenthau, proposed a radical plan to the international authorities which involved converting Germany into a primarily agricultural and pastoral country. Kiefer imagined the enforcement of this plan by painting pictures bulging with carpets of colourful blooms, lets himself get carried away by their beauty, covers his canvases in thick layers of acrylic paint from which emerge soft multi-hued shapes which remind us of Kiefer's devotion to Van Gogh's painting.  He called it "The Morgenthau  Plan". 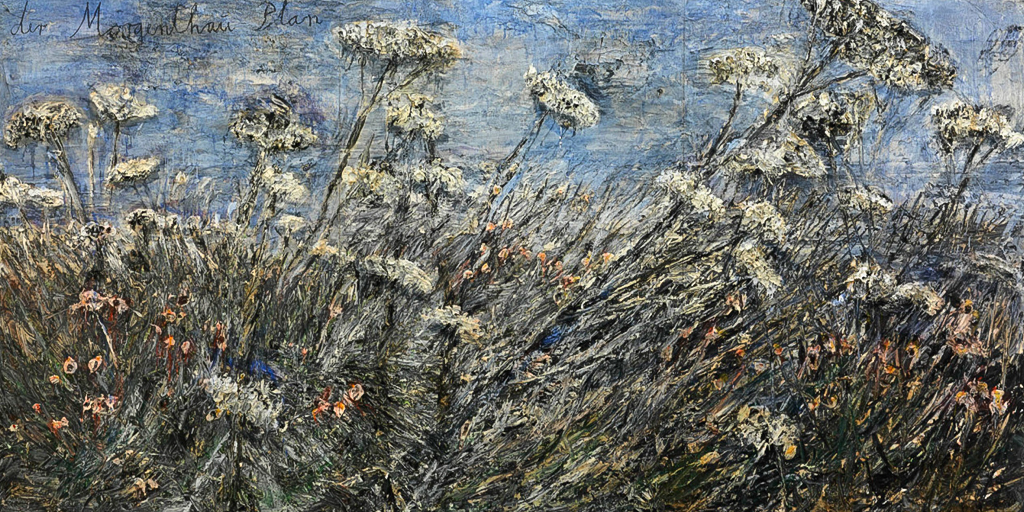 On the opposite wall is "Lilith" (1987 - 1990). Since his visit to Israel in 1984, Kiefer's paintings have been heavily influenced by the Kabbalah (developed in the 16th century by Isaac Louria), the Bible and various rabbinic texts. Lilith was Adam's first wife before Eve in Jewish mythology and she personifies envy, jealousy and the desire for revenge. She is the serpent in the Garden of Eden. The painting, inspired by Kiefer's visit to Sao Paulo in Brazil, shows an apocalyptical city covered in ash. In the centre hangs a long lock of black hair that symbolizes Lilith. The rest of the painting appears studded with dried poppy stalks that leap out of the canvas at us. Again and again there is reference to Paul Celan, one of whose earliest poetry collections was entitled "Poppy and Memory", poppies being the symbol of both forgetting and remembrance. 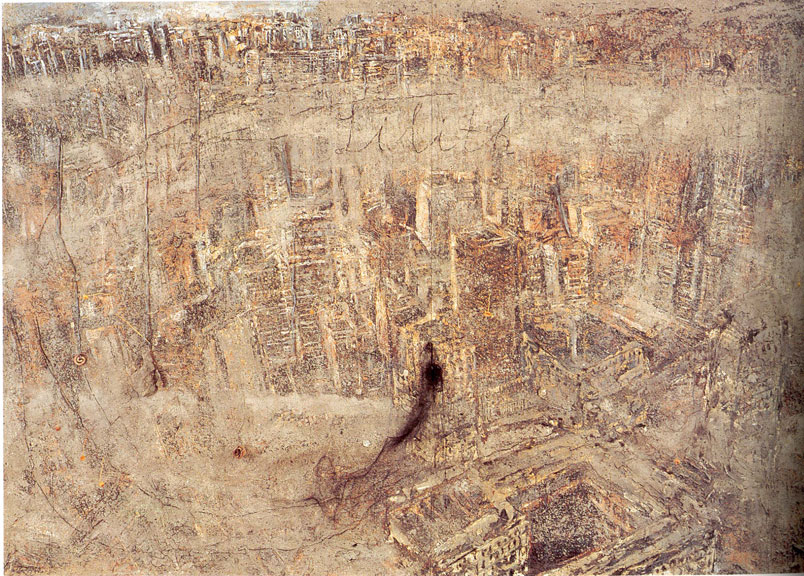 According to the Scriptures, all who are buried in Israeli soil return to life. The scholars of Judaism say that the land of Israel has the power to expiate, to forgive sins. Paul Celan committed suicide aged 48 by drowning in the Seine, Paris. He is buried in the unassuming Thiais cementery on the outskirts of Paris. His plain tombstone is grey, identical to most of the others but covered in little stones. This is how Jews leave a sign that they have visited their dead loved ones. Because flowers belong to life.