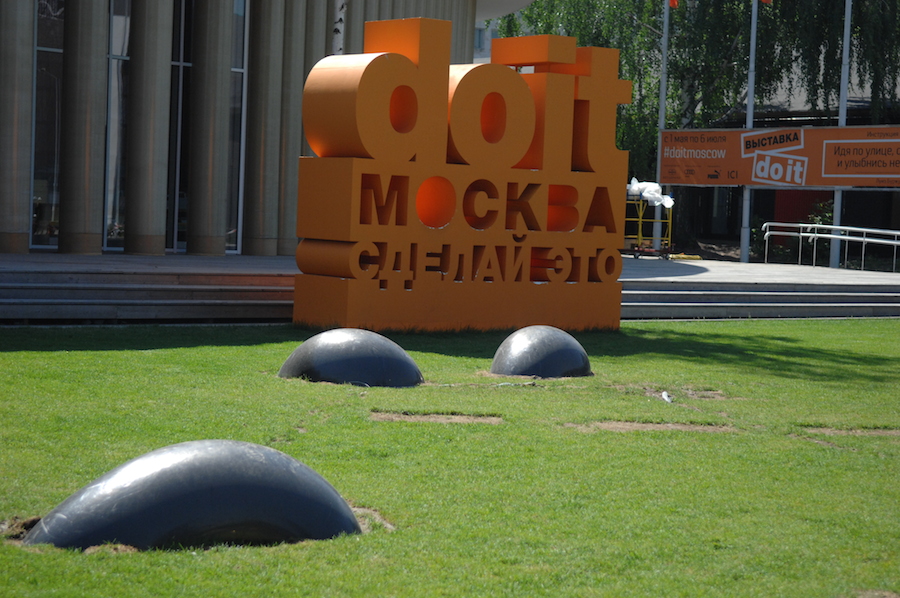 The Garage Center for Contemporary Culture is a non-profit organization opened in 2008 by collector Dasha Zhukova in what was once a bus station.

On May 1st this year, the center changed its name to The Garage Museum of Contemporary Art and relocated to Gorky Park, with the aim of becoming an international point of reference in contemporary art. “Do It Moscow” is the center’s first exhibition since the move.

In this exhibition, the museum becomes an interactive space: a total of 80 artists from all over the world have provided the initial concept for their work together with instructions for use, and hundreds of local visitors have come to the center to see the exhibition and “follow” the instructions. Visitors thus play an active role in the exhibition, as participants as well as spectators, and the center’s staff is on hand to explain how each installation works and what the instructions are. There were many groups of art students visiting the exhibition when I was there, and the experience as a whole was enjoyable and enriching for its singularity. 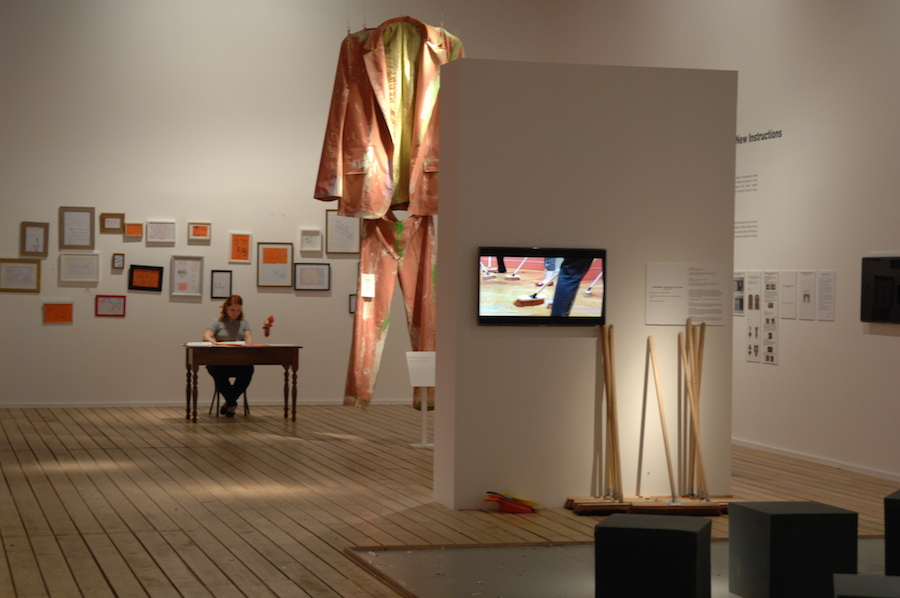 The initiative, which began in January 2014, sees various centers and museums, as well as local students and artists, taking part. Thousands of visitors also help bring the initiative alive through their many interpretations of the individual art works.

The first installation one is greeted with is a messy bedroom where t-shirts, pillows, underwear and boots are all strewn across the floor, as if something dramatic had just happened. The artist John Chamberlain dictated the instructions and Lawrence Weiner interpreted them. The role of the spectator was to change the course of the events being represented by physically changing the composition.

Another installation consisted of colourful knitted structures, reflecting architect Sejima Kazuyo’s idea of building architecture for dogs. In the meantime, a Moscow Art Lyceum student was taking photos of the installation according to instructions by Christian Boltanski. The supervisor of this specific installation also played a part, insisting that the dogs wear muzzles for safety reasons. 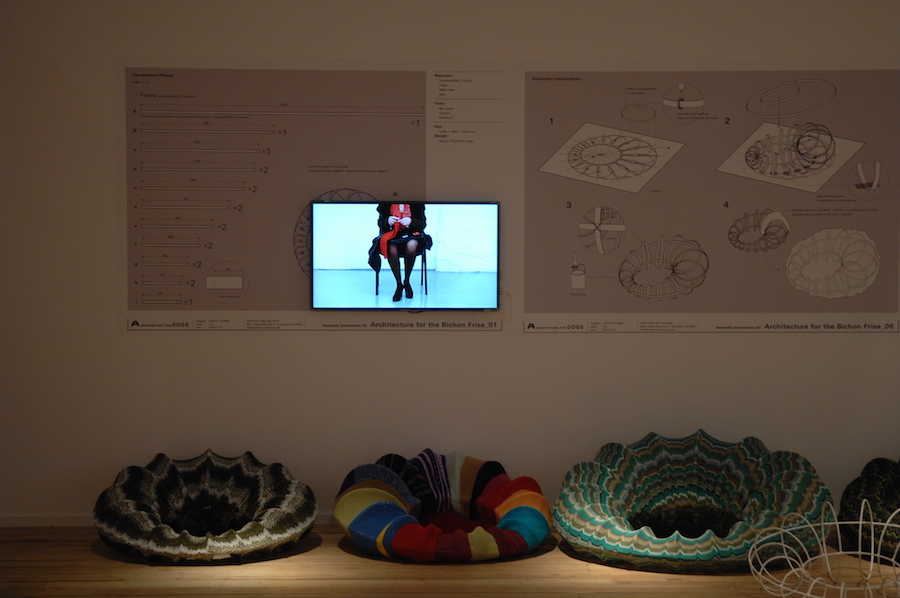 Chinese artist Cao Fei had set up a soapbox where participants could stand up and take on the role of newly appointed presidents of their nation — they were thus invited to give a 20-minute presidential speech and have it recorded in the process.

Erwin Wurms’ offering was an invitation to the public to insert their legs through the sleeves of a sweater and to assume a statue position for 20 seconds. 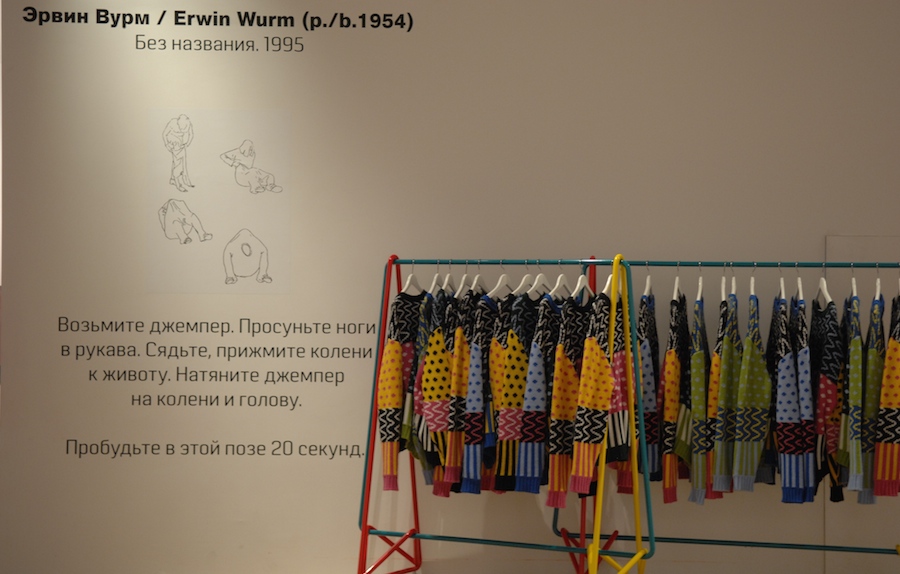 Another surprising piece was by controversial Guatemalan artist Aníbal López, who had placed a sign which read “For Rent” next to a series of his own paintings, the idea being that for $20 visitors could rent one of his paintings for a day, with the revenue going towards the production of future works by other artists. 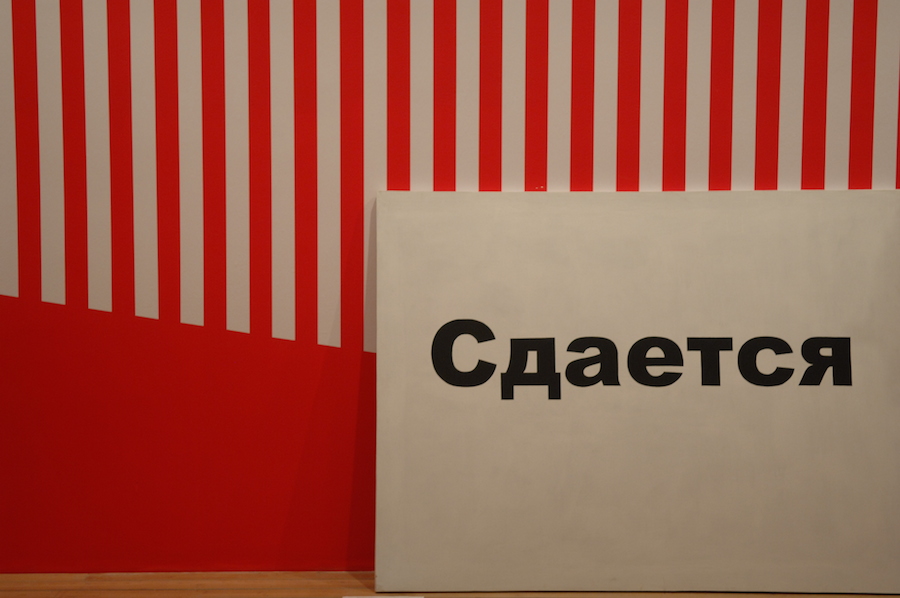 There was great variety to be seen among the installations: a standalone wall by Carlos Cruz Diez, a corner with a mountain of sweets by Félix Gónzalez-Torres, shelves painted by children with the covers of books they’d like to read, paintings by art students from Moscow’s British School of Design, scribbles… The initial idea for the exhibition came from Greek-born artist and architect Andreas Angelidakis, who has shown a real commitment to involving the audience directly in the art installation, which will in fact be destroyed when this temporary exhibition comes to a close. 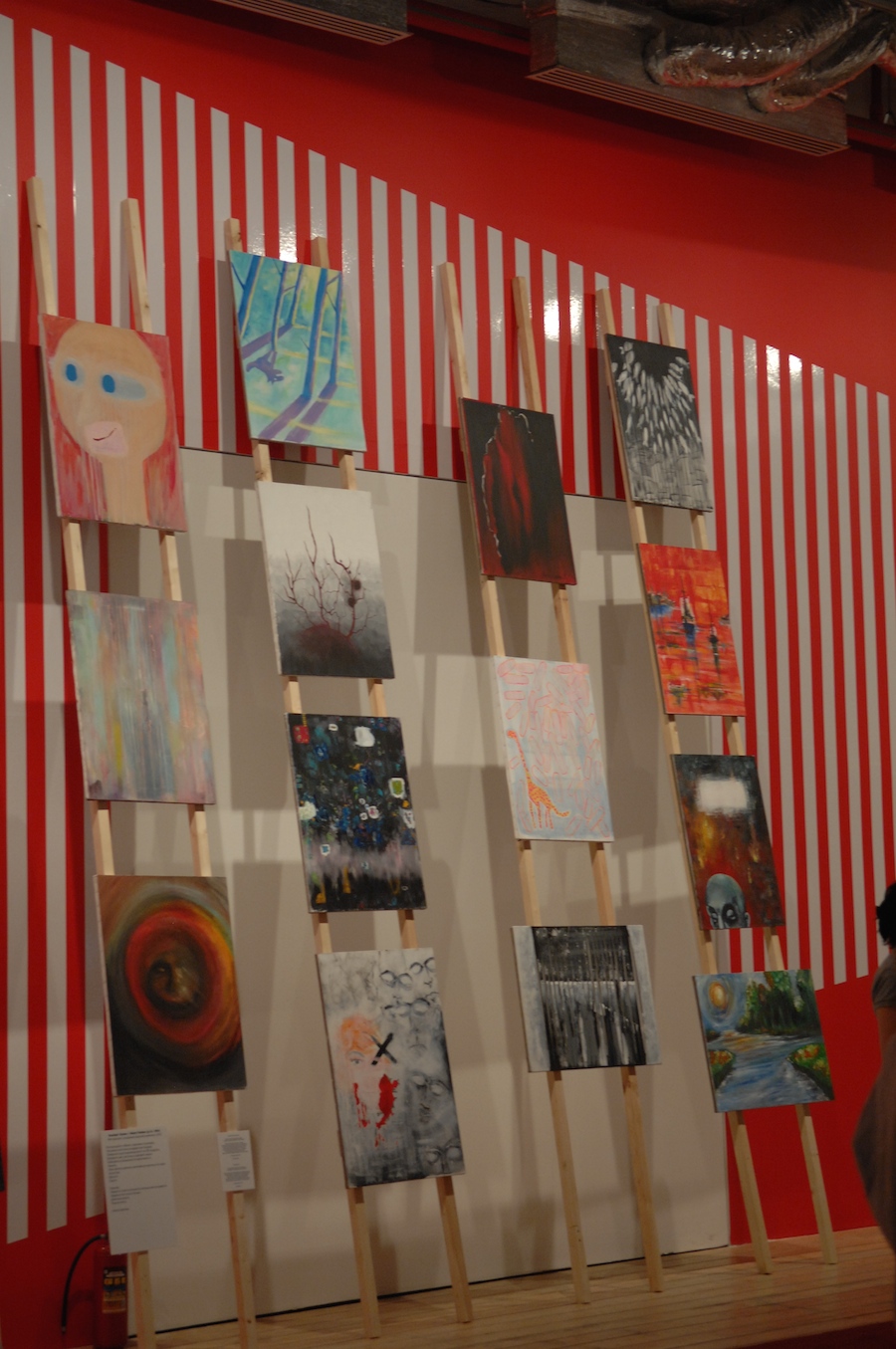 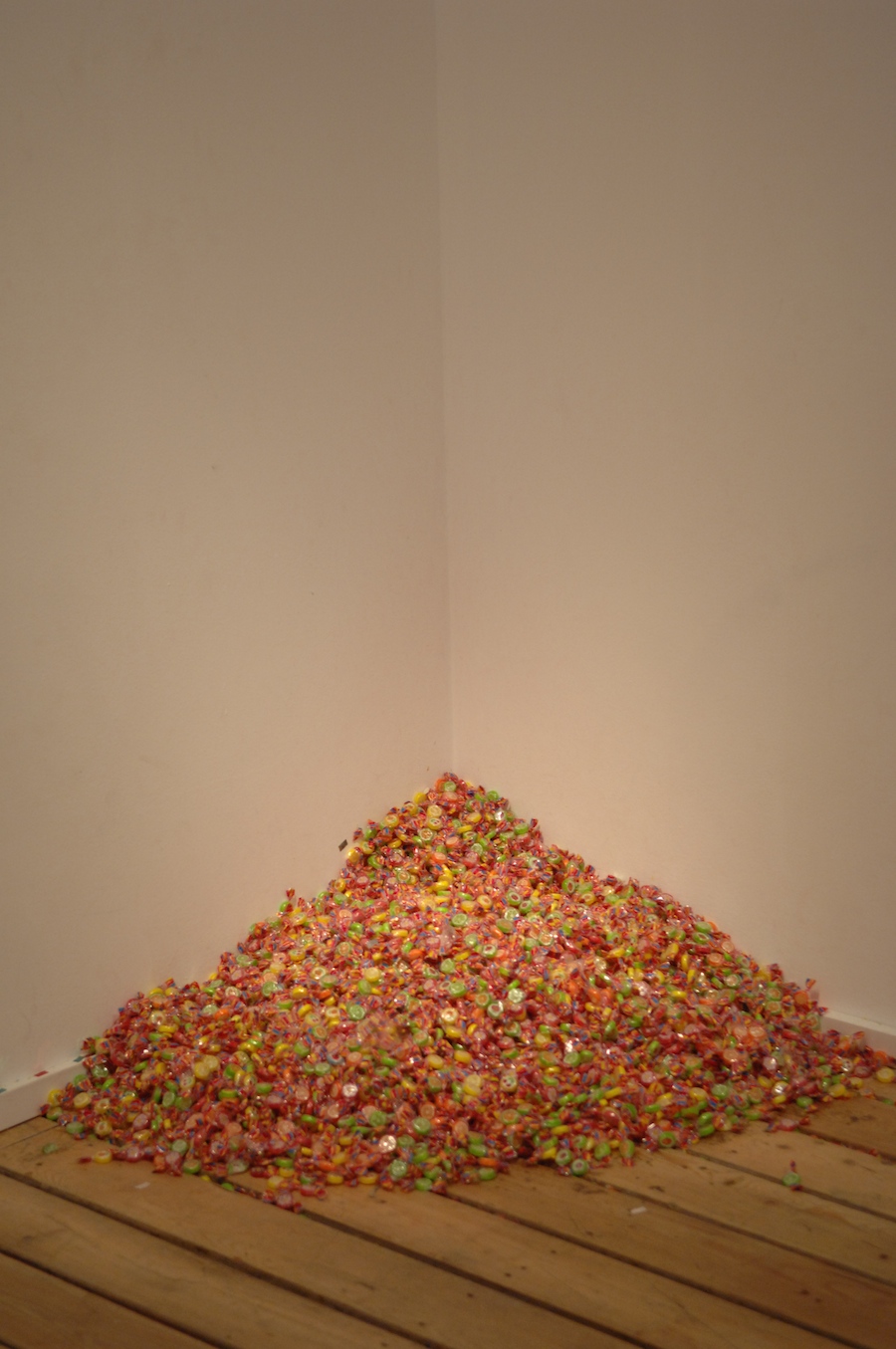 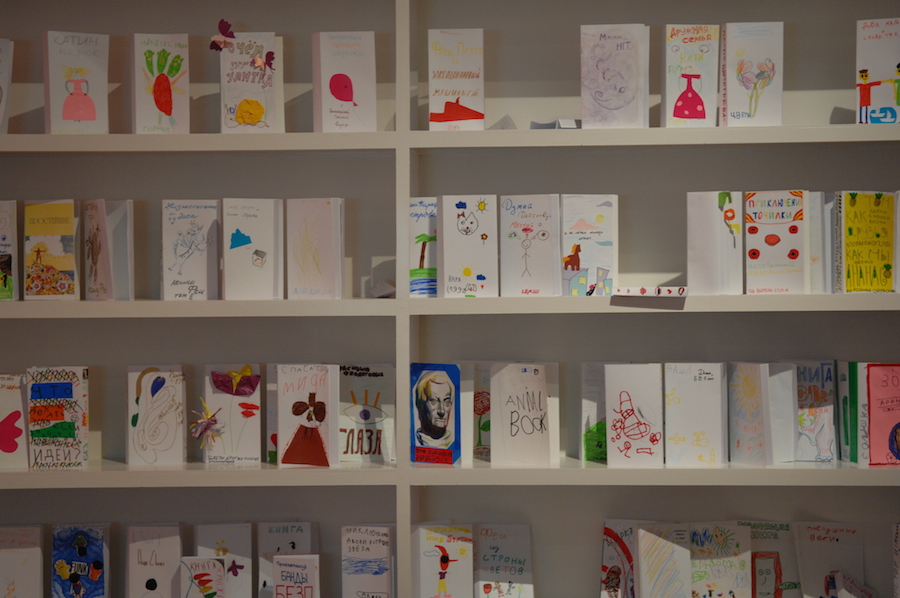 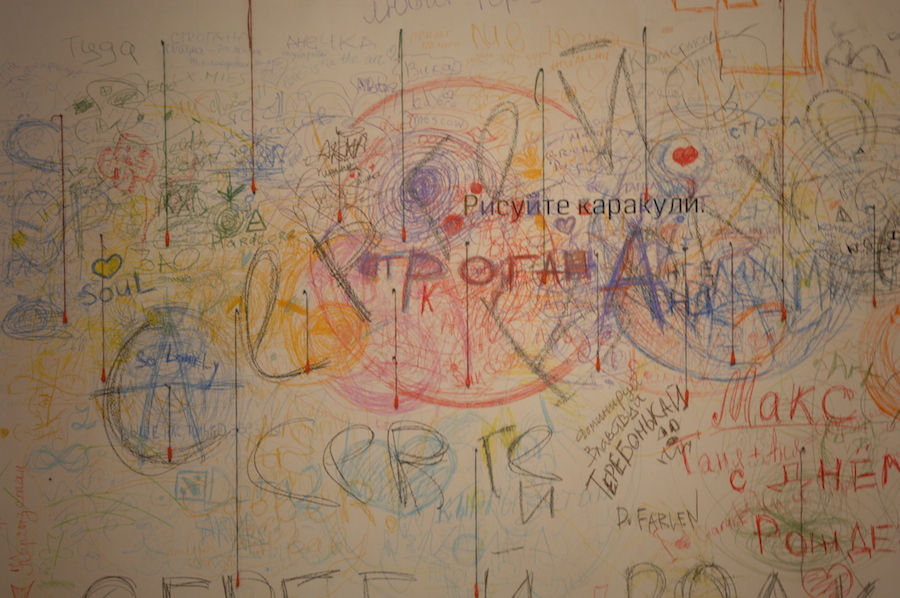