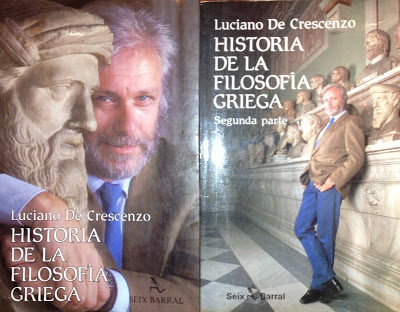 Greek civilization laid the foundations of our contemporary Western culture - it is in Ancient Greece, specifically in Miletus, where the origins of philosophy are to be found.
The book begins with the Seven Sages of Greece and with Thales of Miletus, the first man to attempt to explain natural phenomena through science rather than myth.

Among other things, he earned his fame for having predicted a solar eclipse, discovering Ursa Major and its importance in circumnavigation, and for his theory on the existence of a primordial entity from which all things originate. Until Thales’ findings, all phenomena that could not be readily understood by man were attributed to the Greek gods who, although they exhibited physical attributes far superior to mortals, were nevertheless imagined in the shape of man with their same mortal needs.

For most readers, philosophy is a very dense discipline, and that is true for some parts of it. Hence this book’s appeal: written in an engaging and accessible style, it takes the reader on an exciting journey through the history of thought.

Philosophy, meaning “love of knowledge”, began in Ancient Greece and it is the attempt to find rational answers to the fundamental questions in life. Studying the history of philosophy is important not only for the factual knowledge we learn in the process, but also because it teaches us about the need to develop independent thought.

Philosophy is our guide in the difficult task of daring to think for ourselves. Kant - and many others before him - reminds us of this with his well-known “Sapere aude”, or “Dare to know”. We are so conditioned in our thinking that we don’t even realize it’s happening. Our family, teachers, our spiritual guides, the State, mass media, our consumerist society, etc.: everything and everyone around us, in some way, directs us towards a certain way of thinking and living. This is actually very easy for us to submit to, since we spend a lot less effort delegating our thinking to those we consider better able at doing it for us. According to Immanuel Kant in his 1784 essay, “Answering the Question: What is Enlightenment?”, we act like this either out of laziness - it’s easier for us to have others think on our behalf - or out of cowardice - for fear of being wrong. In either case, he thinks it’s down to immaturity.

The idea of “daring to know” is as timeless as the history of thought; the great contributions made to the evolution of thought by these philosophers can be applied to any time in the history of humanity. And this is precisely why philosophy is a highly relevant subject in all our lives. This book is just the first step.