In the winter of 1910, Amedeo Modigliani was accompanied by Anna Akhmatova on his strolls around Paris where, together, they discovered the Louvre's Greek and Egyptian art collections, moulds from Angkor in the Trocadero's Indochinese pavillion and black masks brought from the Ivory Coast. Modigliani would later draw Akhmatova's Slavic silhouette with sparse outlines borrowing on the Egyption art he so wanted to immerse himself in. The sketch portrays her as solemn, serene, regal even, her posture only softened by a slight inclination of the head. Later still, this pair of young expat lovers in pre-WWII Paris, would recite Verlaine's poetry together duet-style. Akhmatova described their relationship thus in 1911: “We both read Mallarmé and Baudelaire. 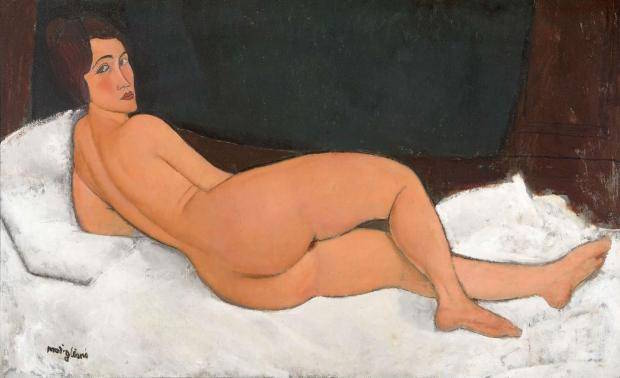 In the winter of 1910, Amedeo Modigliani was accompanied by Anna Akhmatova on his strolls around Paris where, together, they discovered the Louvre's Greek and Egyptian art collections, moulds from Angkor in the Trocadero's Indochinese pavillion and black masks brought from the Ivory Coast. Modigliani would later draw Akhmatova's Slavic silhouette with sparse outlines borrowing on the Egyption art he so wanted to immerse himself in. The sketch portrays her as solemn, serene, regal even, her posture only softened by a slight inclination of the head.

Later still, this pair of young expat lovers in pre-WWII Paris, would recite Verlaine's poetry together duet-style. Akhmatova described their relationship thus in 1911: “We both read Mallarmé and Baudelaire. But he never read me Dante because at that time I couldn't speak Italian”. She was 21 and just starting to write her very first poems in Russian. He was a 26 year old Bohemian artist and still a complete unknown. Modigliani is often remembered as an addict of alcohol and marijuana but, almost never, as a poetry or bookaholic. 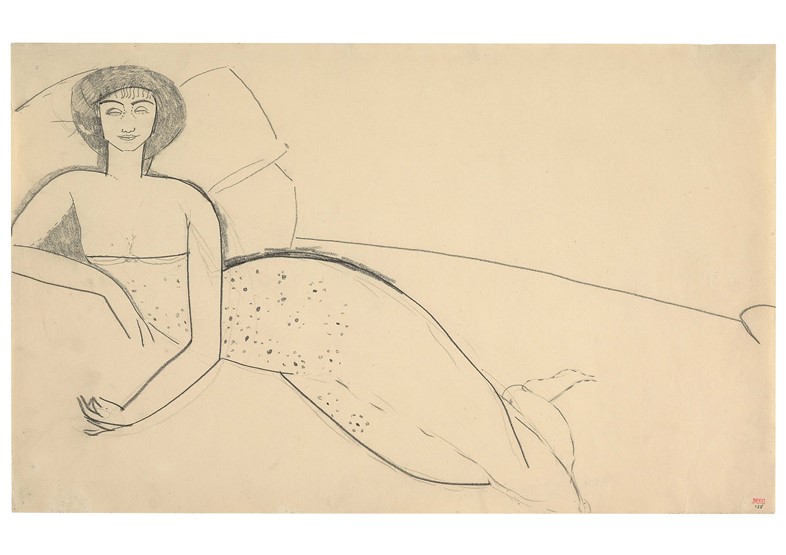 Born in Livorno in 1884, he had been steeped, during his study years in Florence and Venice, in Classical Art and this immersion left an indelible mark on him. He arrived in Paris in 1906 and devoted what remained of his life to art. In Montmartre, he was just another immigrant along with the likes of Apollinaire, Picasso, Derain and Diego Rivera but, in his case, an Italian Jew suffering from tuberculosis and an exotic pariah amongst many other pariahs in that small, cosmopolitan republic of artists and writers. He may have been living in Paris but he was Italian through and through: in his dress (corduroy or velvet suits with knotted scarves), in his seduction techniques, in his understanding of beauty, in his wandering freely ... in his reading and reciting of Dante's Divine Comedy and Inferno until the day he died.

In the early years and similarly to other young geniuses like Picasso or Braque, he began painting in the style of Cézanne. But while Picasso and Braque would retain the Post-Impressionist's simplification in volumes, Modigliani, also heavily influenced by Toulouse-Lautrec and Whistler, focused on portraits but still made use of Cézanne's concept, brushstrokes and very nearly monochrome palette. 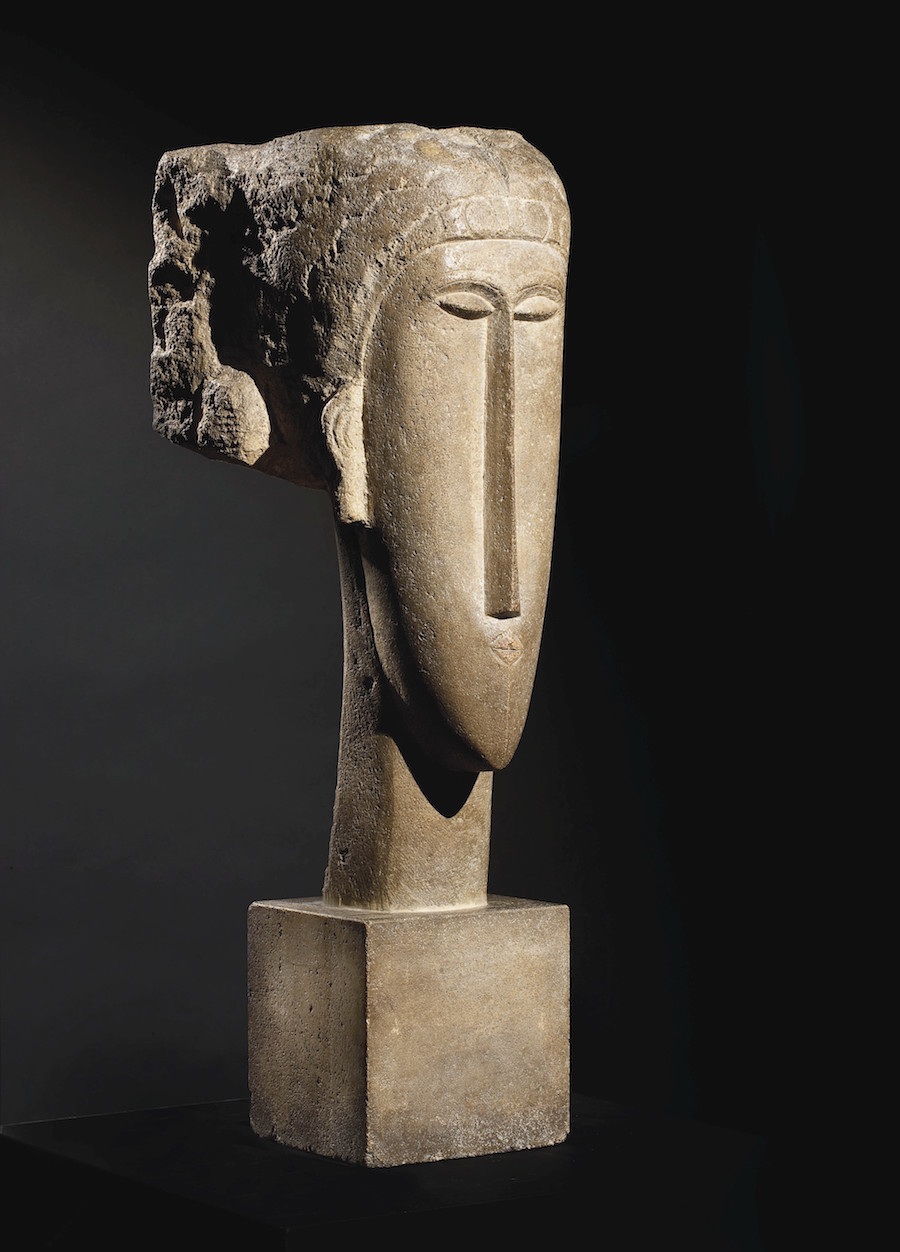 But it was in 1909 on meeting Brancusi that Modigliani left painting behind and between 1910 and 1914 he identified as a "sculptor". Together, he and Brancusi would scour the outskirts of Paris for materials to steal and bring back to the rented apartment they shared in Montparnasse. He began to chisel female heads directly from blocks of pilfered stone. He wanted to liberate sculpture from the dead end down which Rodin had lead him: so much modelling, so much clay. He thought chiselling should be done "live" the way the Ancient Greeks had done it, by breaking into a slab of stone in order to draw from it deities with African or Cambodian features. In the evenings, he would illuminate these heads with candles, turning his studio into a sort of primitive temple of the occult. In the Tate's current Retrospective, there is one room dedicated solely to his sculptures and it is a room that takes your breath away. In it, nine of his 29 sculpted heads rise like totem poles enclosed in their glass cases and arranged in a slantwise dance. The last time these heads were displayed together was at the 1912 Autumn Salon and Modigliani was then still alive. Lipchitz said of them: "He conceived them as a whole and set them up one in front of the other like the pipes of an organ in order that they produce exactly the music he wanted to convey."

The influence of non-Western sculpture in the Paris of Modigliani's day was radical. In 1906, Gaugin's Retrospective at the Autumn Salon shocked the Parisian avant-garde, especially the wood reliefs carved during his latter years in Polynesia, with their marked primitive and feral imprint. That same year, artists such as Derain, Vlaminck, Matisse and Picasso started to buy African art. All of this signified a turning point in Modigliani's career and, around 1914, he suddenly stopped sculpting. The dust particles released into the air he inhaled while chiselling were only exacerbating his disease and perhaps, also, it was occasioned by war being declared that year and his permanently dire financial straits. 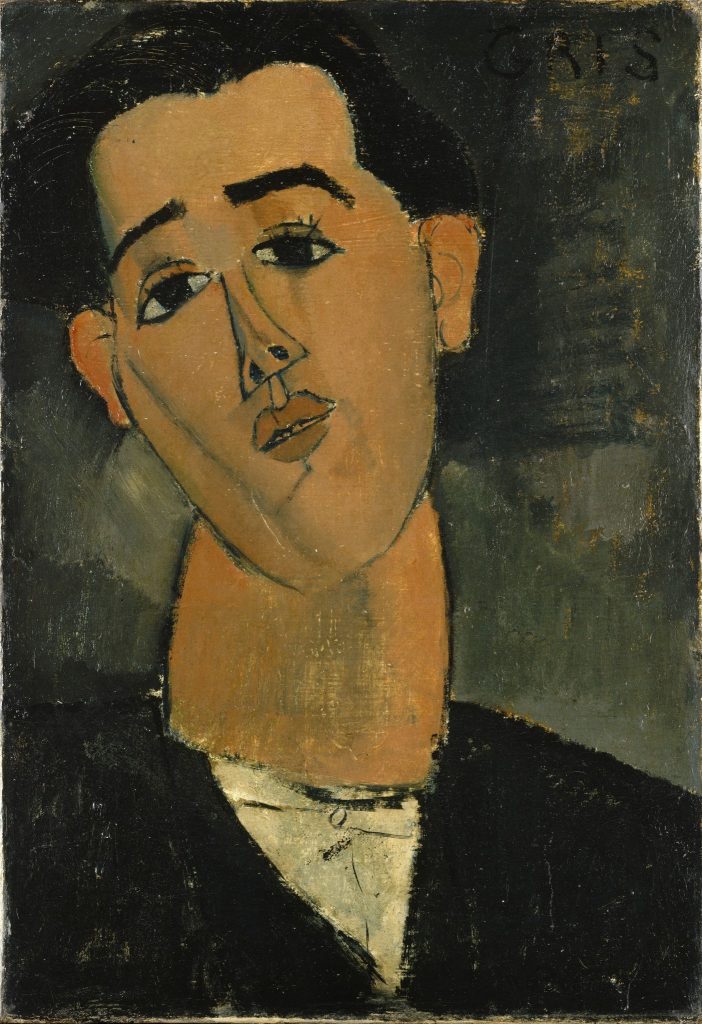 Between 1914 and 1920, the year of his death, Modigliano did only paintings and he did so profusely. In cafés such as La Rotonde, Le Dôme and La Cloiserie des Lilas he chose artists and writers as his models. This is also the time of his complex and serious relationship with the South African journalist Beatrice Hastings. Both were great readers, travellers and socialites. Both shared an addiction to alcohol - whiskey for her, red wine for him - and to hash. At the beginning of the 20th century, Montparnasse had become a ghetto for artists on the fringe of many things and beyond the reach, perhaps, even of the war that was wreaking profound changes on Parisian life. Choosing to be a painter in the artistic community of Paris was his way of trying to integrate his own lifestyle into his art.

This body of portraits, among which are those of Juan Gris, Celso Lagar, Picasso, Diego Rivera, Chaïm Soutine, Derain, Matisse, Cocteau and Max Jacob has many common denominators: subject matter tight to the frame, face-frontal poses and a fixed gaze. Nothing about them allows the spectator to escape the stare of those eyes except, perhaps, their recurrent lack of irises and pupils. Léopold Survage asked, on viewing the portrait that Modigliani had just finished of him: “Why did you only give me one eye?" Modigliano replied: “Because we look at the world with one eye and with the other, we look inside ourselves." 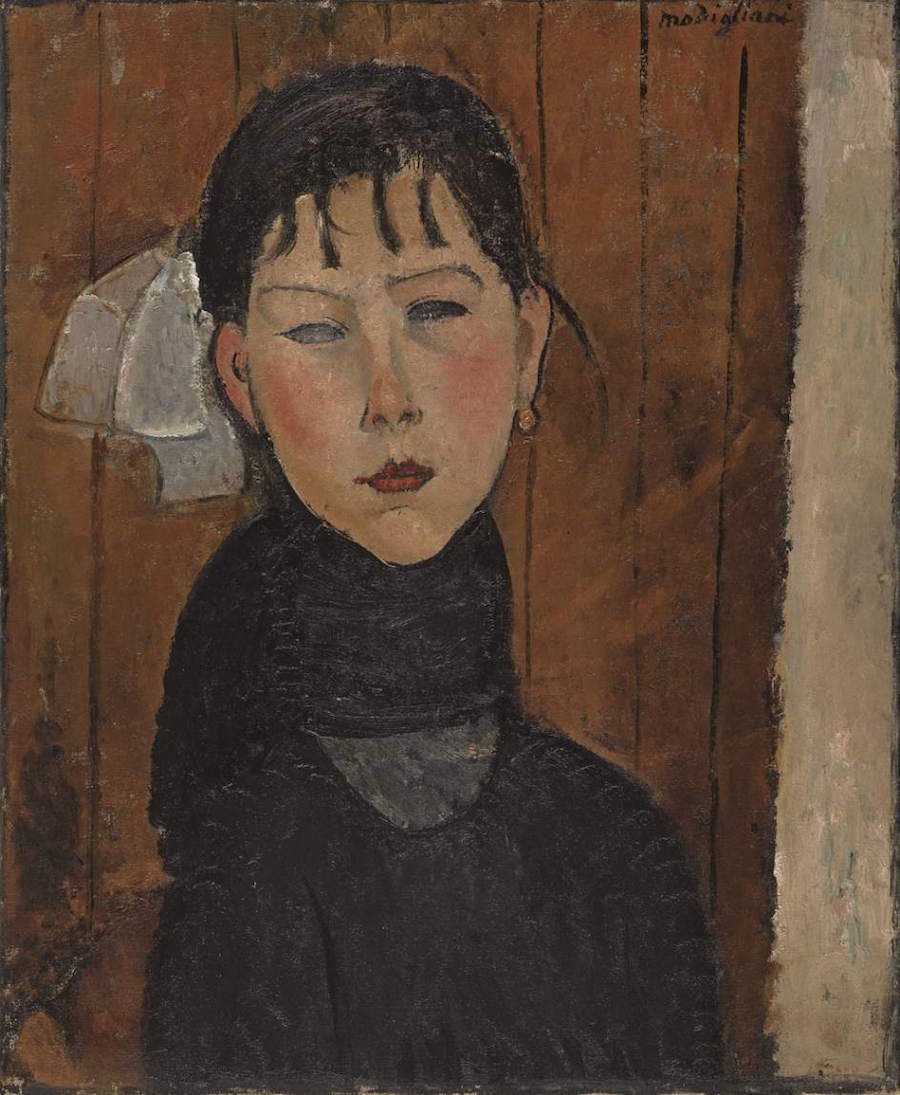 With Cubism now an emerging new art movement, Modigliani tried to create a "synthetic" image of the human being: outlined faces with the bridge of the nose and the eyebrows accentuated. The palette was dense but limited and the surfaces luminous. It was painting that came from some spiritual and intimate place and also from a commitment to integrating multicultural sources. Jean Cocteau summed it up perfectly: “First, everything took shape in his heart. The way he drew us around a table at La Rotonde, incessantly: the way he judged us, sensed us, loved us, discussed and argued with us. His drawing was a silent conversation. A dialogue between his sketch and us."

Modigliani worked furiously, with no let-up, no holds barred. He painted by instinct, as dictated by his Italian genetic makeup and all whilst spitting out blood. Three years before his death, he painted his famous female nudes which were banned for indecency in 1917 - now a century ago - at the inauguration of the only solo exhibition of his work during his lifetime, at the Berthe Weill Gallery. They are, perhaps, the highlight of this Tate exhibit but why so? What produces this magnetic pull? Is it Modigliani's deep aesthetic imprint mixed with a blatant eagerness to provoke desire in the onlooker or was it the £113 million his "Reclining Nude" sold for at Christie's in 2015?

By now, Modigliani was no longer portraying a distant, ideal kind of beauty but a concrete woman: prostitutes, lovers or women who earned their living by posing for him. His models now were modern women with short haircuts, fashionable jewelery and makeup mimicking that of the cinema starlets of the day; women who look at the viewer and accuse him of voyeurism. The distance that existed in the canvases of yesteryear - from Giorgione to Manet's Olympia - disappears. Their bodies are firmly in the foreground, giving the impression of intimacy, as if they would allow us to touch them. 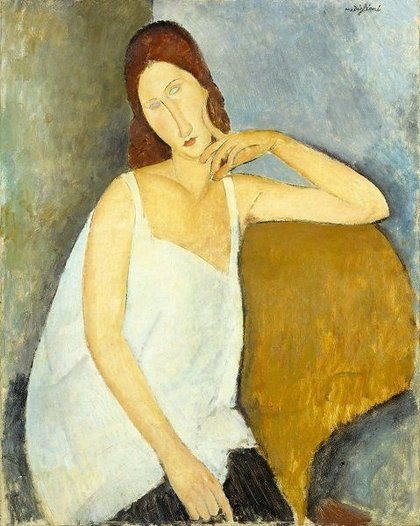 And after this sublime room, the exhibition closes with soft colours, pale light and the sweetest of subjects. These are the paintings of the time Modigliano spent in Nice and Paris with Jeanne Hébuterne, his common-law wife and young mother of his daughter, who was with him throughout his final demise. Shut away in their workshop, surrounded by sardine cans and bottles of wine, Jeanne painted Modigliani while he was dying. He was 35. She was 21. In the last room there is a portrait of Jeanne wearing an ample smock blouse flowing over her nearly full-term pregnancy. It has an air of Parmigianino's Madonna With The Long Neck but nothing about it hints that, just a few weeks later, she would throw herself and her unborn child off the balcony of her parents' apartment. She could not bear to go on after Modigliano's death, her lover with the christian name Amedeo from the House of Savoy and who, the previous day, had been buried with all the honours of a prince by an entourage of painters, writers, actors and musicians in Père-Lachaise cemetery in Paris. 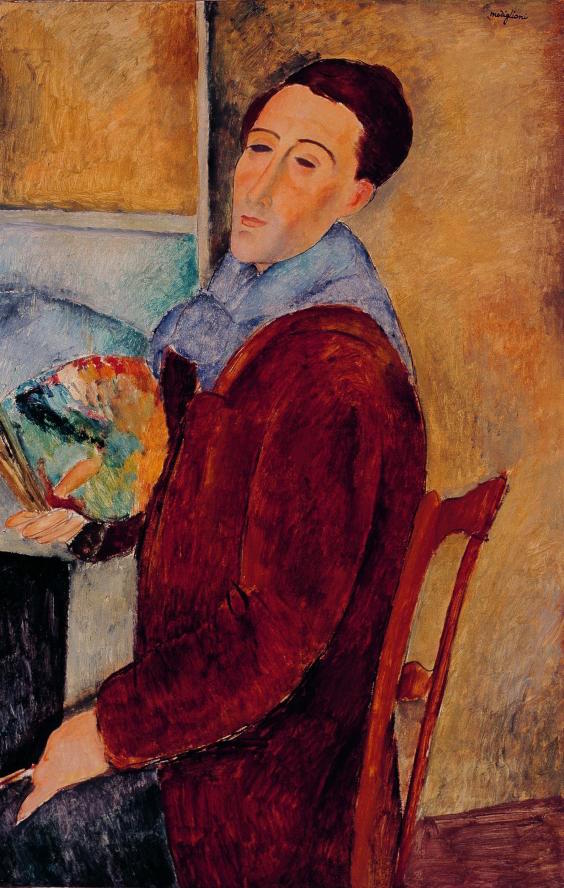 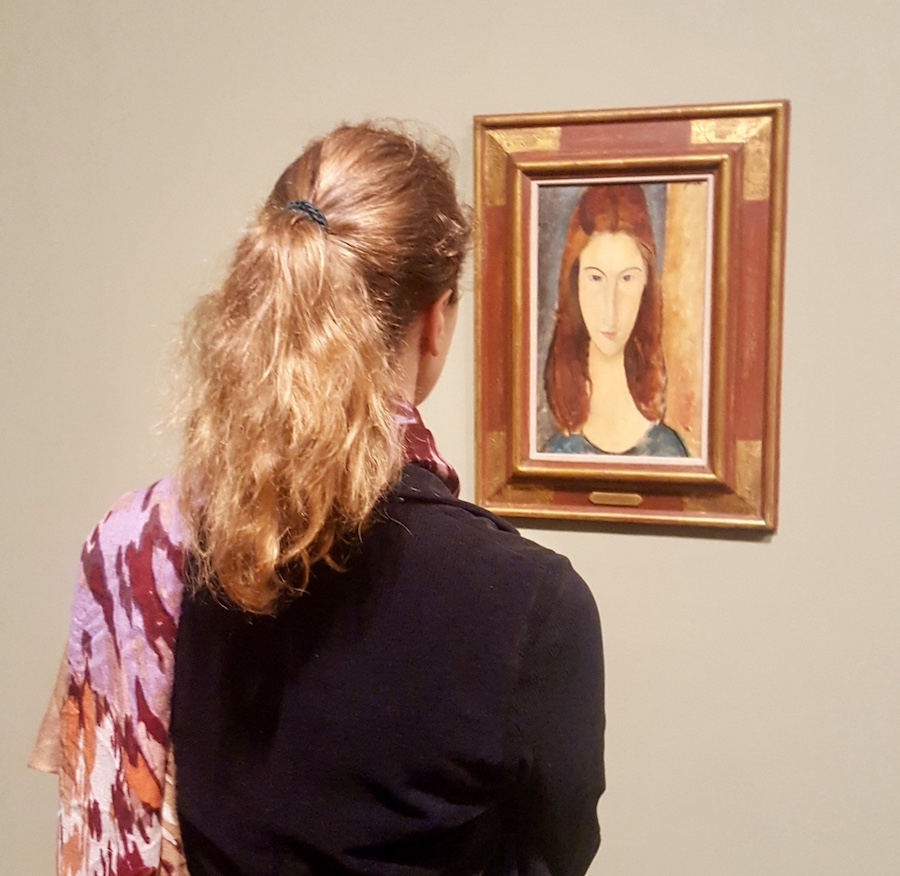 Portrait of Jeanne Hébuterne being viewed by an exhibition visitor. Modigliani, Tate Gallery