A few years ago, Bill Viola found himself with mental block as to how to portray an image of the Virgin Mary. This New York born artist, currently on exhibition in Bilbao, admitted: "I just couldn't figure it out. It flummoxed me ..." Despite his agnosticism and his knack of coming up with new ways to render other religious themes, the prospect of doing so with the Mother of God, and the weight of her infinite representations in art throughout history, shortcircuited the thinking of the artist who, nevertheless, did inaugurate his video-installation 'Mary' in the North Quire of St Paul's Cathedral, London in September 2016. Reflecting on Bill Viola has brought us to Lisbon's National Museum of Ancient Art, where the exhibition 'Madonna: Treasures of the Vatican Museums' reviews the iconography of Mary with over 70 works on display. 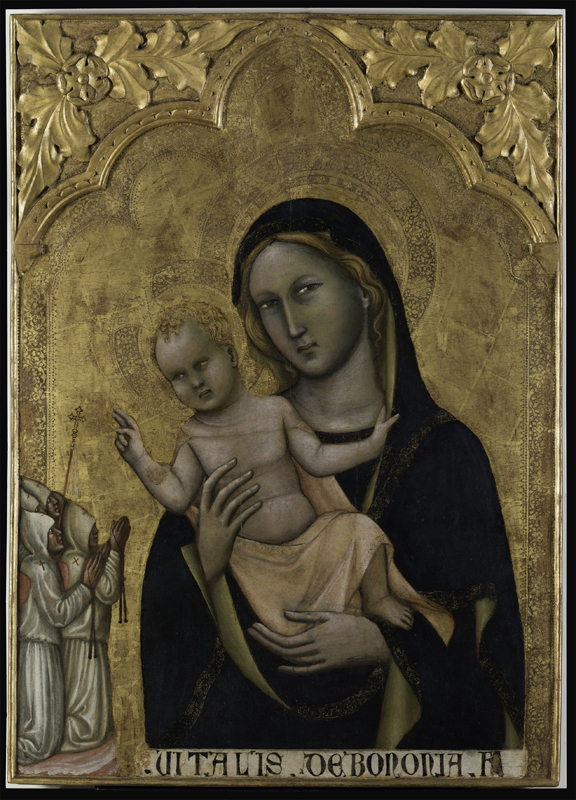 A few years ago, Bill Viola found himself with mental block as to how to portray an image of the Virgin Mary. This New York born artist, currently on exhibition in Bilbao, admitted: "I just couldn't figure it out. It flummoxed me ..." Despite his agnosticism and his knack of coming up with new ways to render other religious themes, the prospect of doing so with the Mother of God, and the weight of her infinite representations in art throughout history, shortcircuited the thinking of the artist who, nevertheless, did inaugurate his video-installation 'Mary' in the North Quire of St Paul's Cathedral, London in September 2016.

Reflecting on Bill Viola has brought us to Lisbon's National Museum of Ancient Art, where the exhibition 'Madonna: Treasures of the Vatican Museums' reviews the iconography of Mary with over 70 works on display. Divided into 8 rooms, all painted blue in honour of Fra Angelico's skies, these paintings, sculptures, drawings and tapestries taken from various Vatican Museums allow us to travel in time from the 4th century to the 20th. We are accompanied by José Alberto Seabra Carvalho, the exhibit's curator, who stops us in the first room to point out two marble low reliefs from the tomb of a child found near St Peter's in Rome. It was one of the earliest burials in the old basilica, built over the tomb of the eponymous apostle, in the epoque of Constantine. Despite its antiquity, approximately dated the year 325, the Virgin Mary's iconography appears clearly and precisely, in an Epiphany scene.

Although the cult of Mary precedes the Council of Ephesus and even the Edict of Milan (313), the representations of Mary in the catacombs prove that her image did not become widespread until  the Church's hierarchy was consolidated by Theodosius and Christianity became the official religion of the Roman Empire towards the end of the 4th century. In this work, Mary is already depicted seated on a throne, as were the empresses before her, and this iconography would later reappear during the Byzantine Empire and later still in Royal European courts. Nevertheless, the relation between maternity and government was known 2,000 years before Christ, when in ancient Egypt, Isis was depicted ruling with her son Orus.

The proliferation of icons of divine maternity was promoted by both emperors and the clergy alike. And to this cult was also added a calender: in the 7th century, Mary's four liturgical Solemnities had already been established and continue to this day. 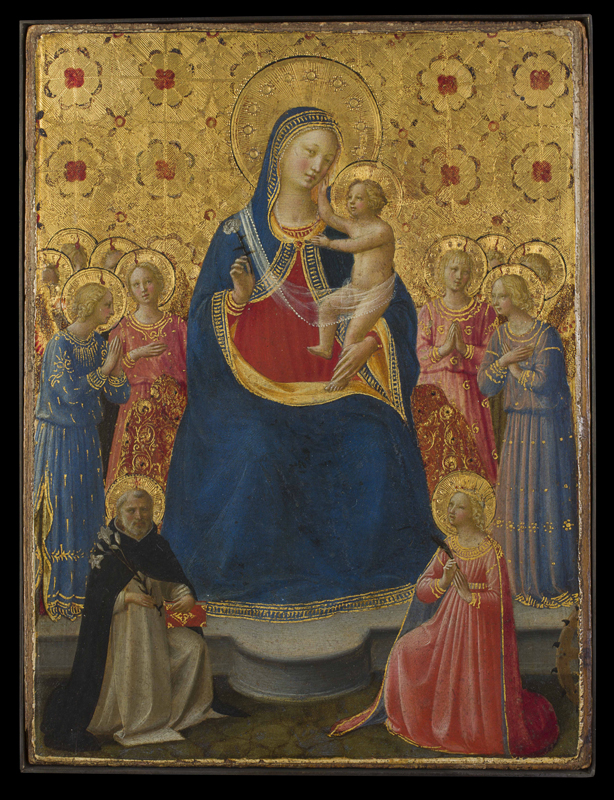 Room 2 is a display of the dialogue between 14th century Sienese painting - with its Byzantian leftovers and Madonnas dressed in gold-leaf - and the 20th. Chagall's Crucifixion (1943)  confirms the core axis from Duccio to Dalí, as regards the depiction of the Virgin Mary. “All of the collections of European art are inevitably great collections of Christian art: after classical antiquity, Christianity has since then been the patron of European culture", concluded Gabriele Finaldi in the catalogue The Image of Christ (2000).

As well as this affirmation and the massive bibliography compiled over centuries, we would do well to imagine the complexities faced by Christian artists on trying to represent Mary. Deciding who or what she looked like when no testimony as to her physical appearance exist; how to portray the episodes of her life; how to convey her suffering. These abstract concepts are difficult enough, almost impossible even, to figure out in words, let alone in image form.

There is a strange little Italian tablet in the exhibition entitled The Assumption of the Virgin, painted on black poplar wood around 1410 by the Siennese artist Taddeo di Bartolo. The scene takes place on Mount Zion where the apostles are crying over the flower-strewn tomb of Mary. Christ descends majestically from the clouds to kiss the hand of his mother and guide her on her journey's end to heaven. It's a wonderful, protective gesture full of tenderness and in sharp contrast to the syncretism of the rest of the scene. The most surprising thing, however, is the depiction of the physical separation happening between Mary's body and soul ~ the latter, behind her golden robe, painted as a monochrome silhouette with blue wings. What an odd and somewhat scary iconography. If the details surrounding these biblical events are unfamiliar to, say, non-Christian tourists viewing them, then what astonished reading might they give them? Moreover, according to the Apocryphal Gospels, Mary's immaculate body did not die but slept for three days before her ascent to heaven.  And so we reflect again on the huge gaps in the teaching of our culture. What do the youth of Spain, untouched by these themes,  think on seeing the Easter processions with weeping Virgin Mary statues paraded through the streets,  their hearts pierced by swords.  Or when, at the height of summer, all the shopping malls close in celebration of the Assumption of Our Lady.  Perhaps it's similar to the frustration some of us feel when trying to decipher the reliefs on the walls of Angkor Wat or the Kufic caligraphy on the medallions at Hagia Sophia in Constantinople. 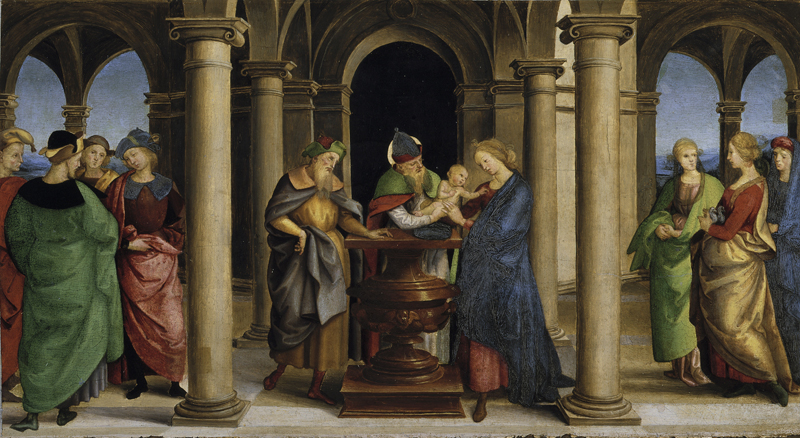 The exhibition continues with great works by artists from Pinturicchio and Rafael to Van Dyck. Then to the Roman collection is added an extra treat ~ a final room, this time painted red, dedicated to some Italian works from Portuguese collections. Here are some very important pieces such as a Leonardo da Vinci drawing and an Adoration of the Magi  by Tintoretto, of a similar calibre to those of the Scuola Grande di San Rocco. 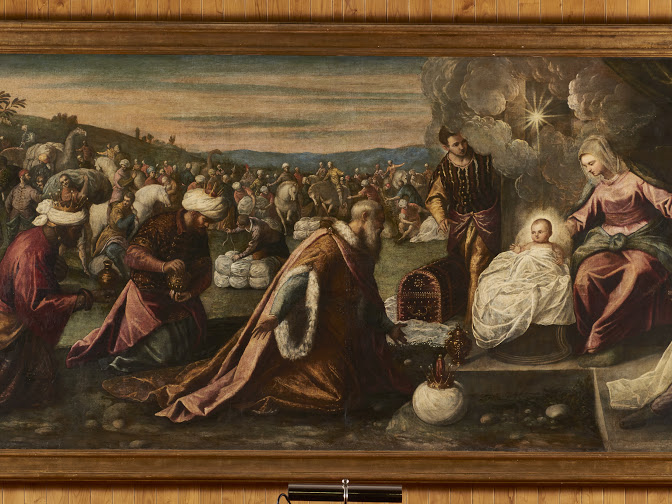 Oriental Carpets And The Life Of The Virgin Mary

There is a secondary, though no less interesting, dimension to this exhibition. A singular look revisiting the world of thread- weaving: the textiles, fabrics, rugs, silks and tapestries that symbolise an exchange between East and West as well as between the decorative arts and their reflection in painting.

There are several fragments of 8th and 9th century silk brocade of, perhaps, Syrian origin on display. The link between these fabrics and their later Coptic versions signal an affinity between these five-thread silks and Near Eastern Christianity.

Nevertheless, it is the appearance of Oriental rugs in the Renaissance portrayals of the Virgin Mary or in scenes of her life that piques our interest here. 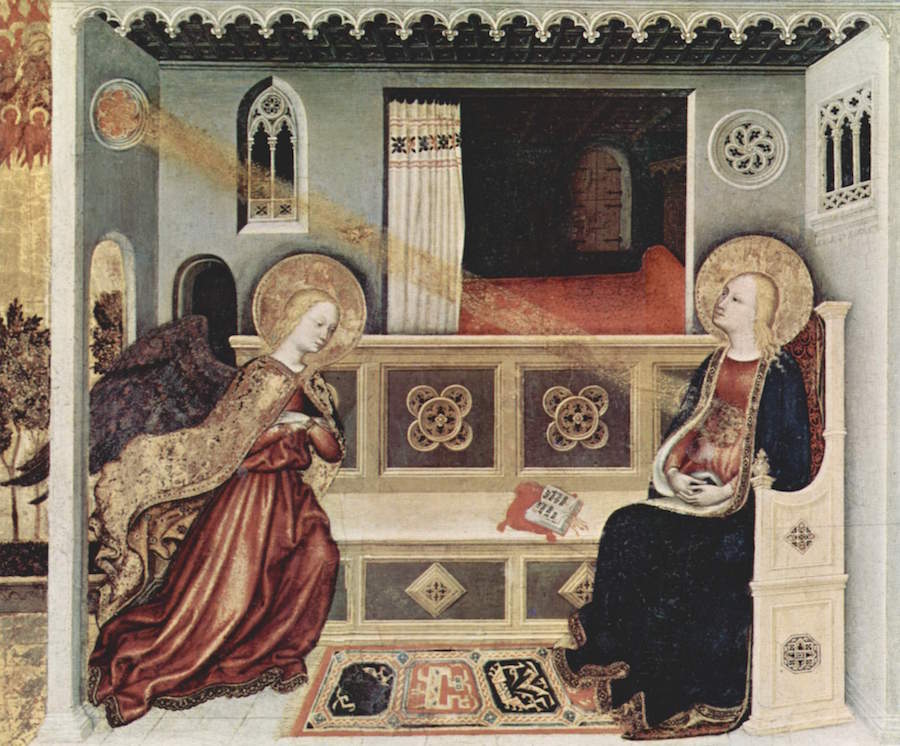 Venice and its lakes were, in the 15th century, the gateway to the Orient. Its strong commercial ties with Constantinople prolonged an Eastern influence which lasted much longer there than in the rest of Italy.  Also, luxury items such as hand-woven rugs (from Cairo and Damascus - controlled by the Mamelukes - Ottoman Turkey, Persia and India) were a great bargaining tool, 60 examples  of which were gifted to Cardinal Wolsey in exchange for a license allowing Venetian merchants to export wine into England.

From the 13th century on, when Marco Polo declared those from Anatolia to be the world's finest, Oriental rugs were already in huge demand. So much so that they soon made their appearance in European painting. Their vivid colours and manifold, elaborate patterns were like a magnet for artists' paintbrushes. For a long time, and in the absence of any originals, these rugs were only seen through their depiction in paintings. Consequently, the better-known designs, with their medallions, arabesques and Boteh motifs were named after the artists who painted them: Lotto, Bellini, Crivelli, Membling and Holbein.

In his famous The Visitation (1504), Vittore Carpaccio sets the embrace between Mary and her cousin Elizabeth in an idealised version of his natal Venice, a Venice festooned for a Feast Day, its balconies and marble palaces draped with Oriental rugs. Only those rich enough to afford them displayed them as decoration outside their homes. A fact that, also, demonstrates the 'melting pot' that was Venice at the time: a city whose patron, St Mark, had been "stolen" from the Middle East; a city whose great Arsenal went by the Arabic name "dar sina'a" meaning 'House of Manufacture; and a city where, notably, Muslim prayer mats were painted on the ground beneath the feet of Christian divinities. 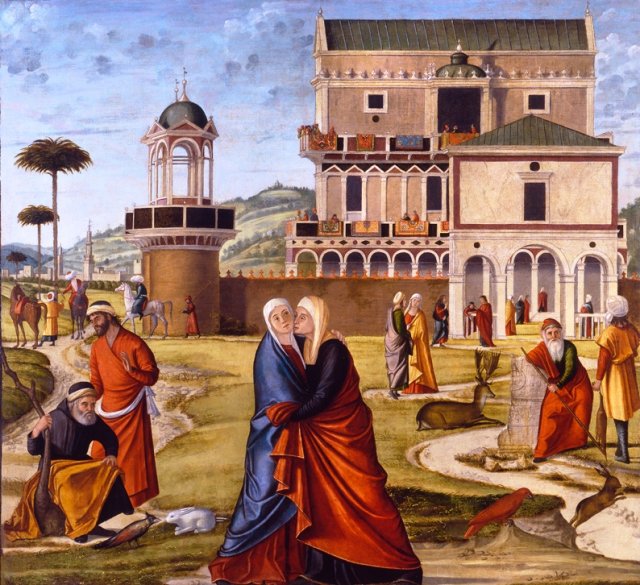 We continue on our "thread trail" with more paintings. In his The Virgin of Humility (1435), Stefano di Giovanni - called Il Sassetta - paints his Madonna seated on a rug of the "Lotto" style and this fabric is clearly marking out a sacred space. Also, Gentile da Fabriano's Annunciation (1425) and Sano di Pietro's Scenes From The Life Of The Virgin (1438). At that time, with the exception of rare examples such as Jan van Eyck's The Arnolfini Portrait, these rugs were never placed on the floor since only the feet of a saint or a king could aspire to tread on them.

Now at the end of our double tour of the Madonnas on display, we make our way to the gardens of this 17th century palace on the river Tagus. On leaving, an image from the museum's permanent collection catches our eye, namely the imposing Saint Augustine by Piero della Francesca (1460-70). This bishop of the Church, with his austere, blank stare and his white gloved and bejewelled hands holding a crystal quartz crozier, wears a chasuble that is richly embroidered with scenes from the life of Mary. Again, a Nativity scene, the flight from Egypt ... and again, what on earth must the Vietnamese tourist beside us be thinking? His eyes are fixed on the Annunciation scene where a winged being holding a flower branch faces a kneeling woman whose abdomen is traversed by a beam of light? Wasn't it Marc Chagall, of Belarusian descent, who said: "The Bible is the greatest source of poetry of all time". 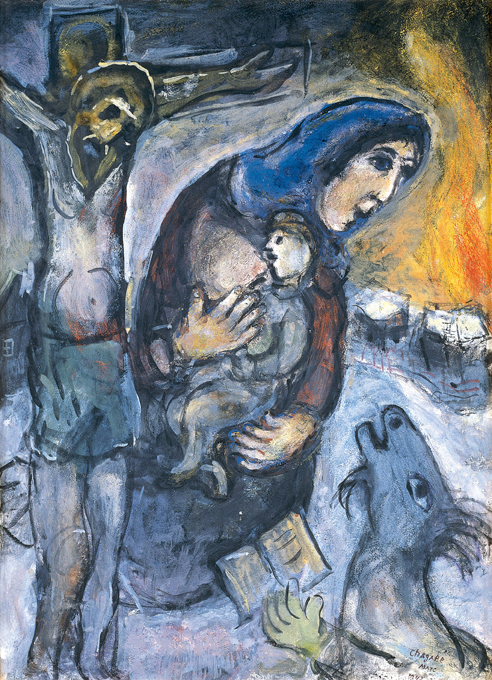 Marc Chagall, The Crucifix (Between God and the Devil), 1943, Vatican Museums

Madonna: Treasures of the Vatican Museums