The Fahrenheit Gallery, Valeria Aresti's beautiful Madrid art space, is currently hosting the exhibition “Some Other Sunset” by rising New York star, the painter Heidi Hahn (b. Los Angeles, 1982). It comprises a series of 7 medium-sized oil paintings and 8 drawings, each of them dominated by the silhouette of a female body. These are women lost in thought, silent and, for the most part, in a forest lit only by the sunset. 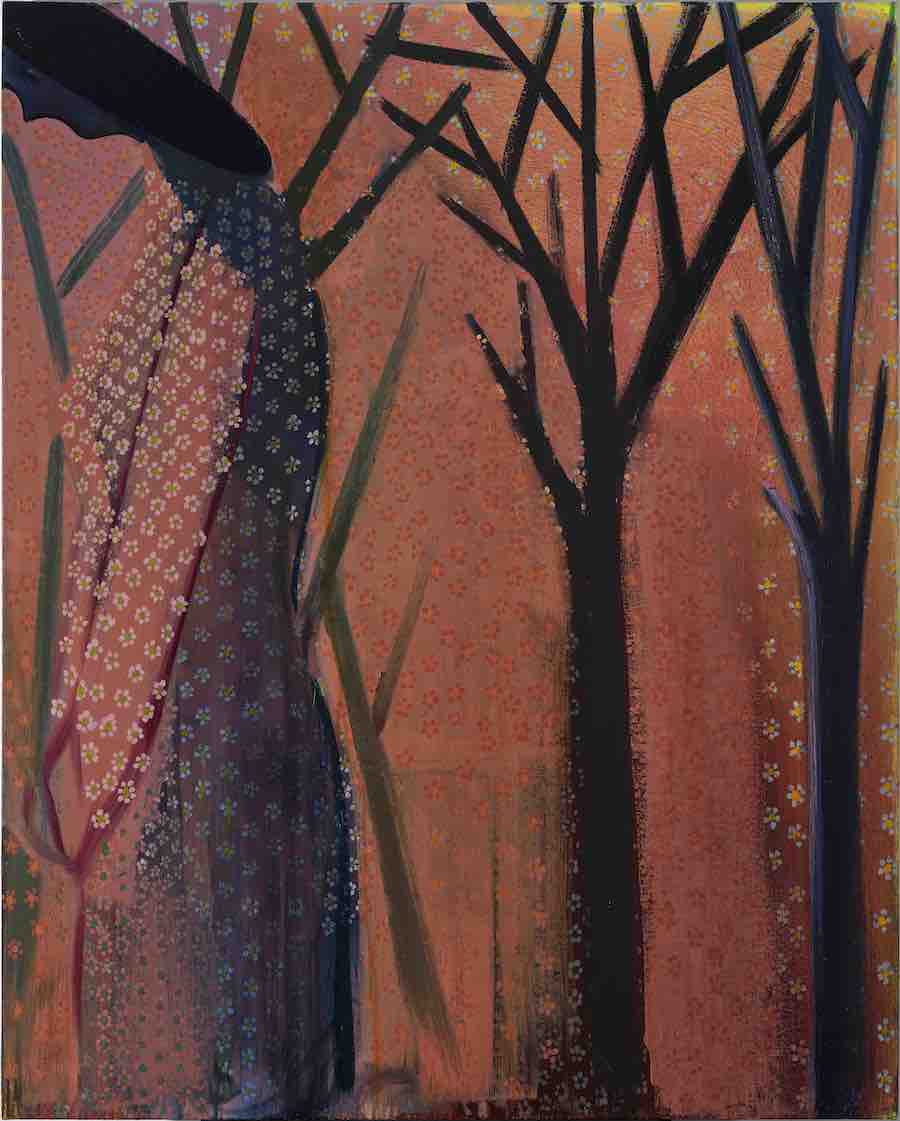 The Fahrenheit Gallery, Valeria Aresti's beautiful Madrid art space, is currently hosting the exhibition “Some Other Sunset” by rising New York star, the painter Heidi Hahn (b. Los Angeles, 1982). It comprises a series of 7 medium-sized oil paintings and 8 drawings, each of them dominated by the silhouette of a female body. These are women lost in thought, silent and, for the most part, in a forest lit only by the sunset. Their faces are schematic, some have neither mouth nor eyes, but even so, they seem given over to deep, prolonged thoughts and lost in a loneliness that is palpable in each of the brushstrokes that compose the sleeve of her sweater or the rays of golden sunset  on her shoulder. Through them, Heidi Hahn seems to want to sign a declaration of principles that distance her subjects from the classical canon and its interpretation, widely-held until the beginning of the 20th century, namely, the naked bodies of women as the focal point of their beauty. Instead, she wraps them - or rather shields them, like a cuirass - in clothing that is loose-fitting, neutral, warm and nondescript. Their faces, barely hinted at, also alert the visitor to the fact that, in this exhibition, physiognomy takes a backseat to the volume of the body. There is also a lot of silence, stillness and an incessant question floated on the air: What are these women thinking about? 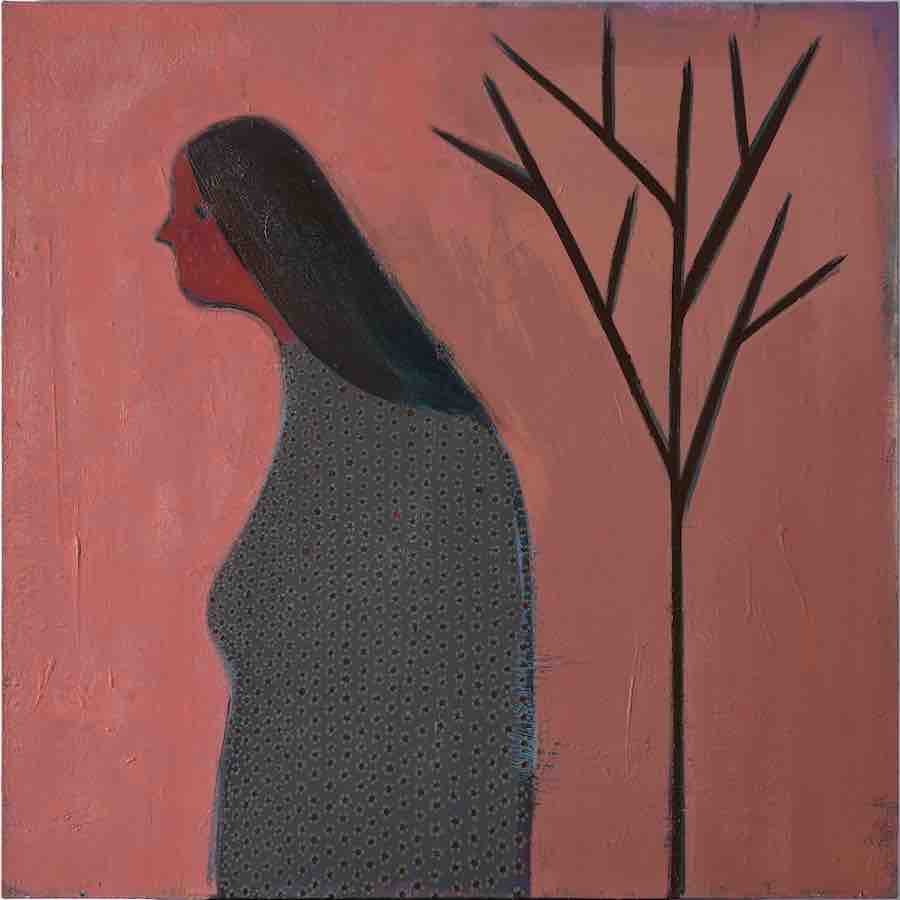 From the outset, the contour lines of these bodies seem vaguely but surely reminiscent of Matisse and also, due to their solidity, of Picasso from his classical period. Matisse and Picasso, two undisputed trailblazers who, by the same token, arguably set both the standards and the constraints preventing young artists from being free to step outside the confines of some very marked, very recognizable patterns. Playing supporting roles in this exhibition are the simplified outlines of trees, hazy, barely there, and, in most of the works, the coral pink lighting of a sunset. It is, perhaps, this twilight colour that lends a somewhat sad, prolonged tone and very intimate voice to these women suspended in time. On these bright spring days in Madrid, the autumn light in Hahn’s paintings, the red sunsets, the leafless trees with black trunks, seem somewhat far removed from us. And yet, there is something deeply familiar to us in the message communicated from those lonely, pensive figures. And so it is that these women, lacking in form and expression, beguile us precisely because they confront us with something that is strangely close, something that is palpable in every square metre of Madrid’s pavements: loneliness, introspection, doubt. Hahn's women return us to the most fundamental questions, the ones that fill our lives and cities today during what will hopefully be the last days of the pandemic. Who are we, where are we going, what is going to happen now? 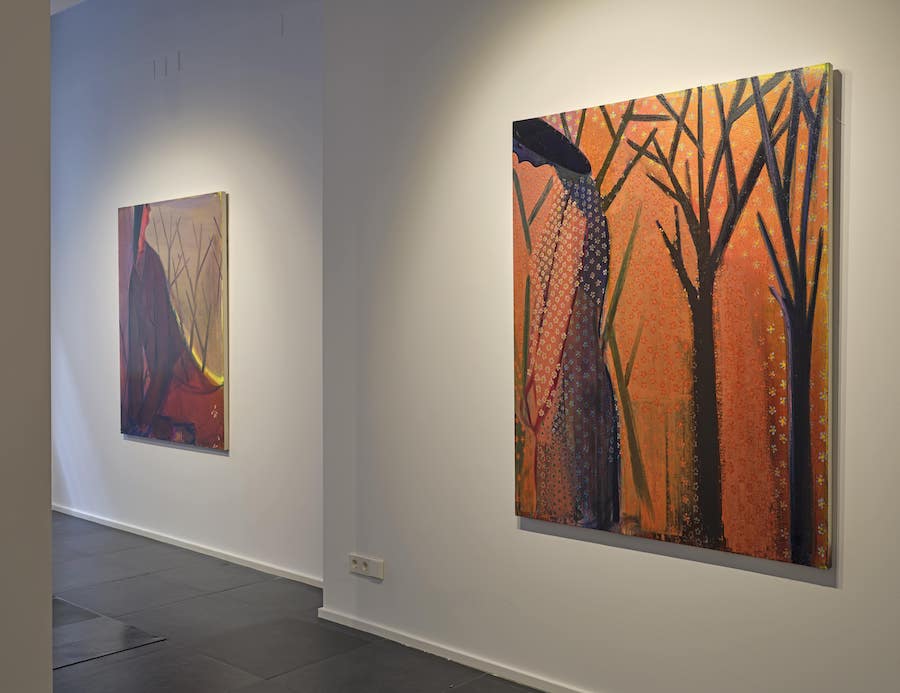 Hahn's peculiar way of dressing her subjects is very much in keeping with her idea of altering the function of clothing so as to turn it into something that shifts between a layer of protection and an architectural covering: "I have painted women for a long time now just because I feel like I don't know if I represented them yet in a way I find truly convincing [...] I keep chasing this idea of like 'oh I like the iconic idea of women, but I don't like the classical.' I don't like romanticism that's through the lense of the male gaze; the cliché male gaze. I care about how I see these women and how I want to represent the women in my life [...] These women are trying to become something that they don't necessarily have access to yet. And, so maybe the paint tries to point them in the right direction, if that makes sense, it's trying to give them that strength where there is still that vulnerability, there is still something that is not quite figured out and that's why the figures are looser, and their faces have this idea of falling apart while trying to become something that is very solid." says Hahn. The attention to detail that Hahn pays to the fundamentals of technique is powerful - line, light and colour are the three keystones of an archway – her archway - leading us through areas of flat colour and transforming them into places of feeling and emotion. Brushstrokes ranging from the almost liquid and transparent to the thickest, loaded with pictorial mass. Here, in a large number of canvases, she uses a striking technique, namely - painting simple flowers in repeated patterns as if they were on printed fabric or wallpaper. Up close, the texture of these fake block prints makes them almost touchable which leads us to believe that Hahn transforms feelings into something palpable. 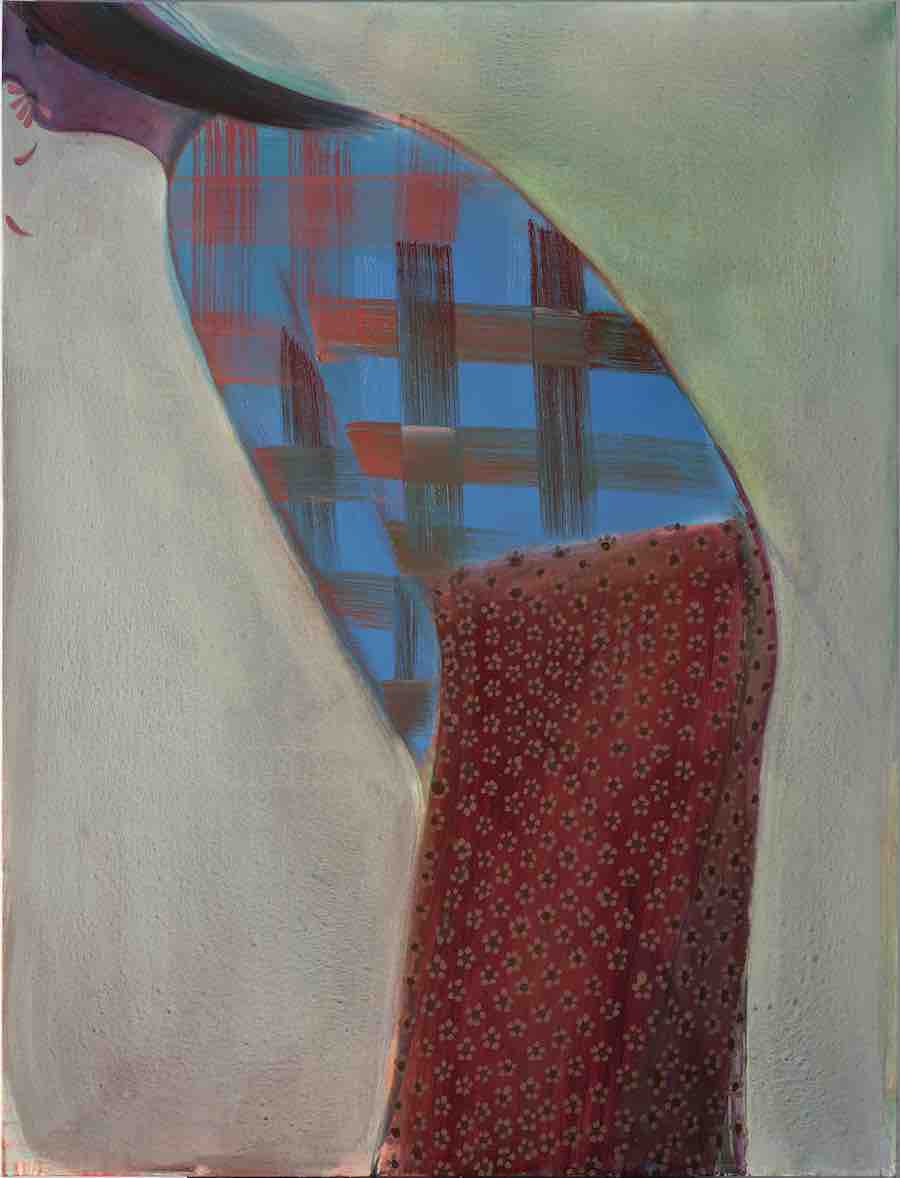 These paintings are a tribute to ‘woman’ and her inner life. The way the paint is applied in different layers intensifies the narrative of each painting, calling to mind Edvard Munch and his search for the psychological portrait. Hahn strives to capture emotions and pent-up feelings. She turns the average woman, the one going about her daily routines, into her icon. Her anonymous characters seem lost in their own worlds and thoughts as they shop, sweep, prepare food, or tap on their mobile phones. They are, therefore, in total contrast with the widely-held consensus on ‘woman’ today – that she is more preoccupied with her appearance, fashion fads, the gym and the rat race. Hahn, however, avoids all emphasis on the physical aspects of her models, or even their femaleness, to accentuate instead their moods. This is why Hahn speaks of a "narrative formalism", referring to the amalgamation of paint and figures that happens in her work. 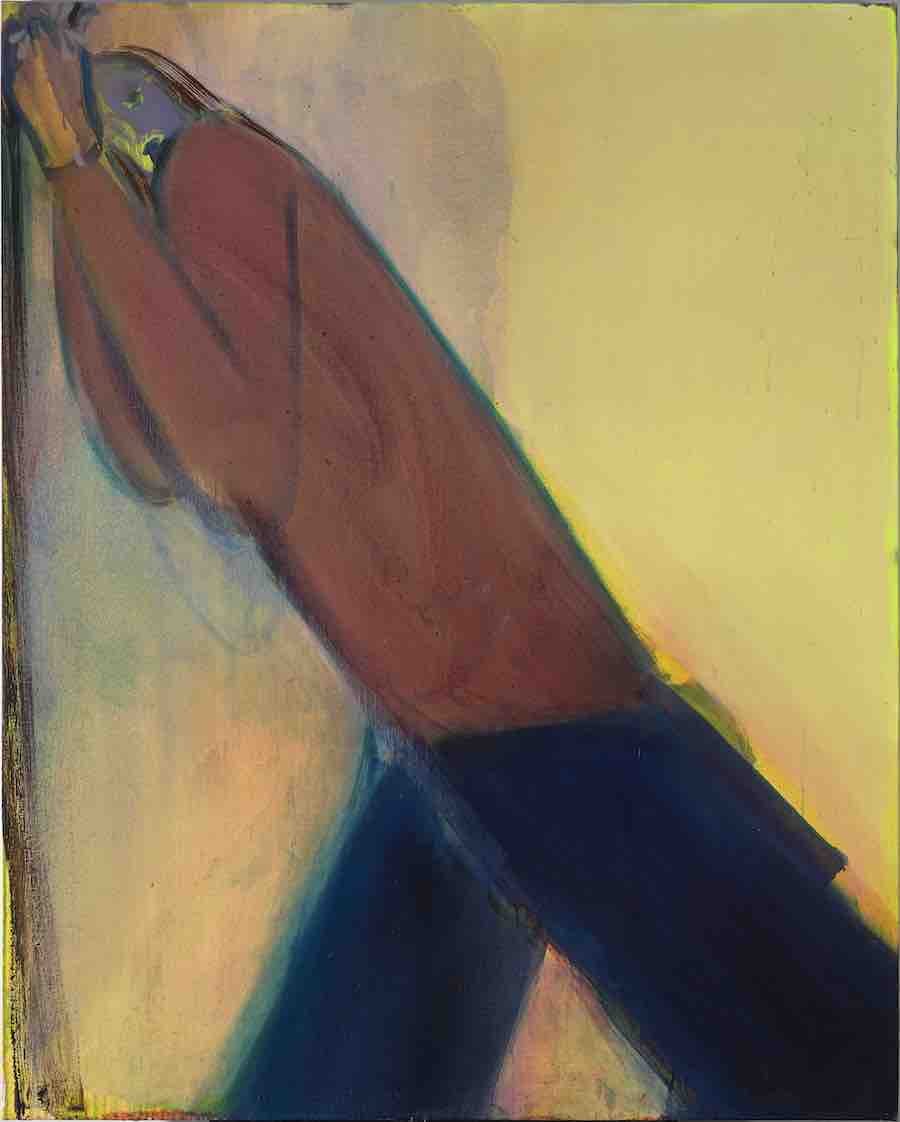 Hahn likes to work in series of sometimes up to 14 canvases at a time. She groups them together in her studio and works on them, moving them around, looking for connections between each of them and creating a simultaneously different and unique voice at the same time. Layer by layer, broad washes of colour emerge which will become the bodies and, later, their voices. Rather than beginning a painting from a sketch, she invariably develops her compositions during a pictorial process that has already begun its journey. This method of “abstract metamorphosis” aims to lead the viewer's eye beyond the pictorial surface: "So, I always think of myself not as a straight figurative painter, but like a narrative formalist. Which means I need the paint, the materiality of the paint, to work as hard as the image is going to work. They need to go hand in hand, the content and materiality need to go hand in hand to create the painting and what it is trying to be. And so, the paint itself is trying to tell a story with how it's painted: the texture, the brushstroke, the gesture of the paint moving within a certain shape. And so, to me that is even more important than creating the image. And, if it's just image based I am not really interested in that. I am more interested in the paint doing the heavy lifting rather than the thing it's trying to be," she explains. 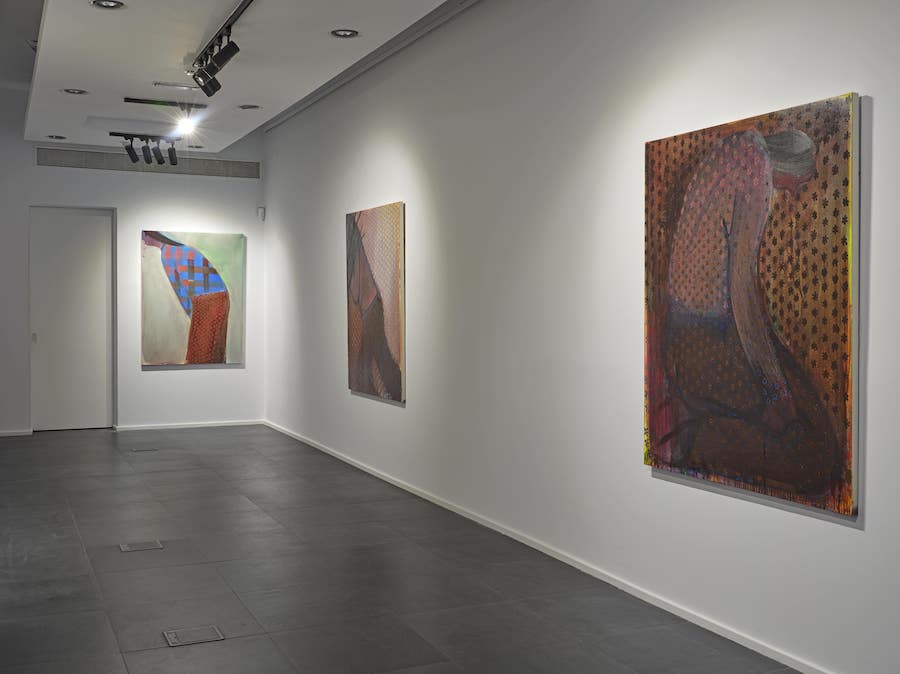 Born in Los Angeles and with a Ph.D. in Fine Arts from Yale, Hahn, now living in New York where she is Assistant Professor of Painting at Alfred University’s School of Art and Design, explains: "So, If I paint a face, it's more like: how is this texture being defined with the medium? How is it being defined with the mark making? How do the colours interact with each other to create that tension? And, I also think of residue in the painting, where everything is trying to be something that is a residue of a reality [How can paint mimic reality?] It's just paint. And the way the paint works to create this artifice, I am really interested in. And, I am really interested in these artificial components trying to make up a reality." Hahn never works from a preliminary drawing; she lets everything just happen and evolve after the first brushstroke, born of uncertainty, after which each character follows its own course and the oil paint guides the form: "In these works, the woman becomes a tool of visual seduction, the formal aspect of the paint delaying ownership over the content [...] I don’t know what exactly these women want to hide themselves away from, but I feel that it is necessary in order to really be seen, be themselves. Defined by the artifice of paint, they are untouchable, camouflaged by beauty and anonymous in profile. The works on paper also offer a respite from definition, the seriality leading to anonymity," says the painter. Hahn fell ill with COVID in April last year, at which time she felt the virus made her aware of being "just a body" up against the world. She admits to feeling scared and thinking that her body did not belong to her. She also thinks that, as a result, she found it more difficult to face her work: "I find it hard to put aside a pandemic and political unrest and carry on creating something that resides in an intellectual framework and trades in a formalism devoid of the present reality”. She adds: "I think the future of the art world will become insular. If you are a maker, you have the compulsion to make, regardless of if you are able to show it to the world".

Thus, the women who emerge from Hahn’s paintings no longer belong to the concrete world of people, having entered that other plane populated by figures made of texture, line, gesture and colour and in the form of moods. 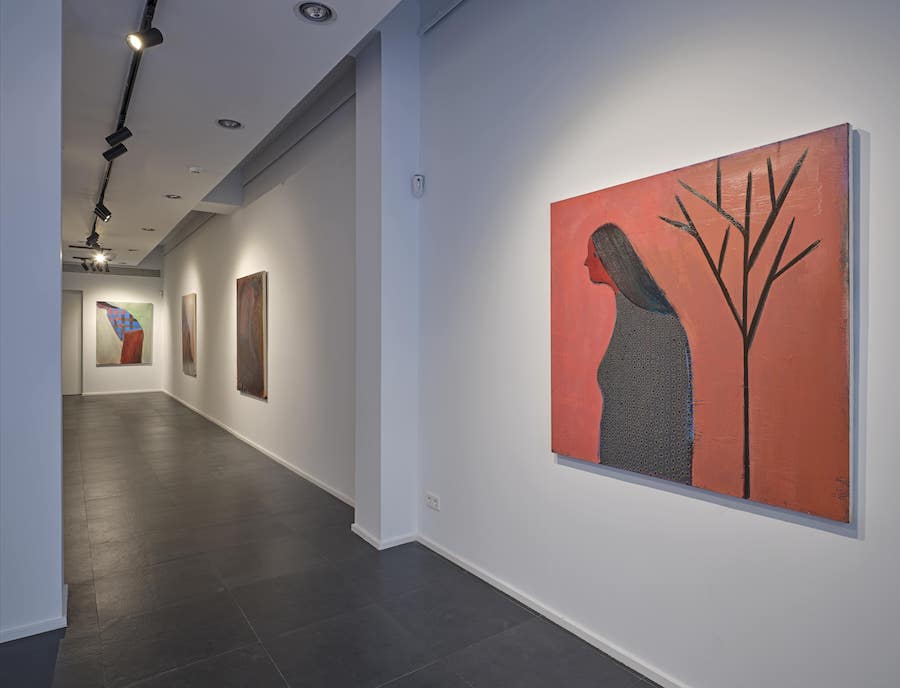 Translated from the Spanish by Shauna Devlin