A little over a month ago, on 20th April 2020, one of the greatest photographers of the last three decades died aged 92. Gilbert Garcin, whose artistic career began on his retirement from the job he had devoted his whole life to - a small lighting manufacturer in Marseille - was 65 years old when a whole other world opened up before him ... that of photography.

A little over a month ago, on 20th April 2020, one of the greatest photographers of the last three decades died aged 92. Gilbert Garcin, whose artistic career began on his retirement from the job he had devoted his whole life to - a small lighting manufacturer in Marseille - was 65 years old when a whole other world opened up before him ... that of photography. What kickstarted his new lease of life was a course he enrolled on at the 1995 "Les Rencontres d'Arles" Festival and from then on, nothing would ever be the same again for this budding sexagenarian artist. The recently-opened Paris Photo Salon of 1998 afforded him the opportunity to get his work known internationally and take him, in a very short space of time, to the highest heights of success at photography. 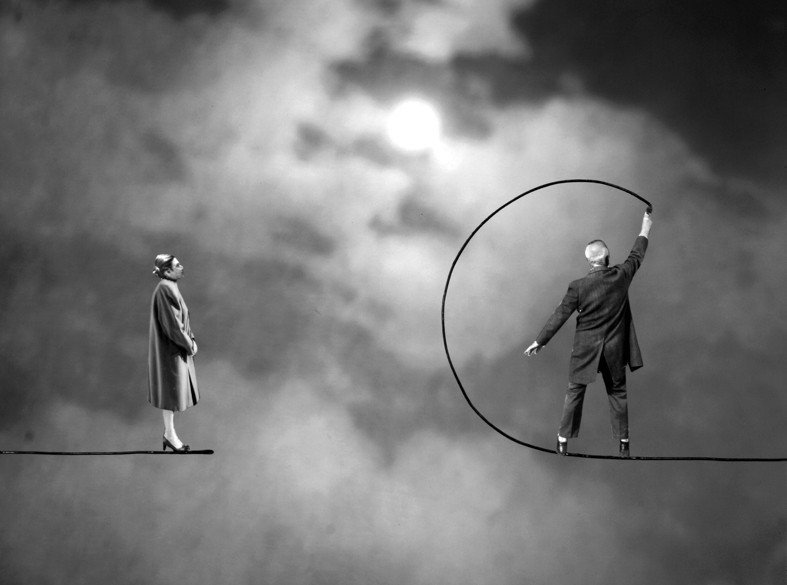 Through his images, we see a new world where simplicity and complexity walk hand in hand, creating new realities and turning the absurd into the commonplace. His way of looking at things transforms objects into something different, placing them 'through the looking glass'. It is perhaps  this that linked him, by his own acknowledgement, to the filmmaker Jacques Tati and the Belgian painter René Magritte. Like them, Garcin shows us how to see a new world between the visible and the invisible, the real and the imagined, the borderline between the conscious and the unconscious. The photo montages, or staged photos as he called them, are the ideal means by which to create those mysterious images with elements of surprise that run throughout his work and manage to say the unsayable. He had great trouble choosing titles for his photos and he himself often found no explanation at all for his own creations. I am quite sure André Breton would have been fascinated by the compositions Garcin created and captured with his analog camera, optical inventions that never lose their naivety and humour, and where everything is false and real at the same time. His photos also have something of the metaphysical, those geometric representations that intertwine with the human figure in search of a change of relationship and meaning in order to build new associations. 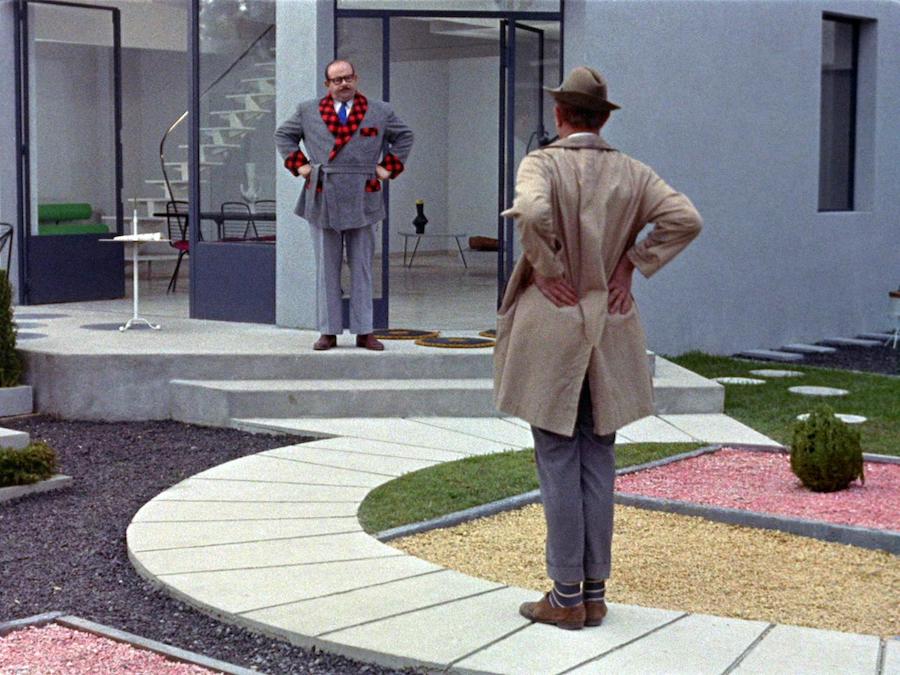 Behind every snapshot creation is a craftsmanship that took between 20 and 30 hours of studio work. On the table of his modest workshop in Ciotat, Garcin would stage the different scenarios, sometimes skies borrowed from 19th-century painters, other times small sandy surfaces or linear compositions inspired by Paul Klee's drawings or even vintage film reels on which he would overlay his image, laid out on a stand. The viewer, on approaching any of his photos, will discover their play on scale, their imperfections and the naturalness and uniqueness that encapsulates each of them.

Garcin's work is so personal that he himself models for his own photos. It is he who functions as a working part of his creation, he is the actor playing the leading role and he who directs and calls the shots at will, according to circumstance. He has said: "It's not me, it might be my double, but essentially you have to see him as a character." 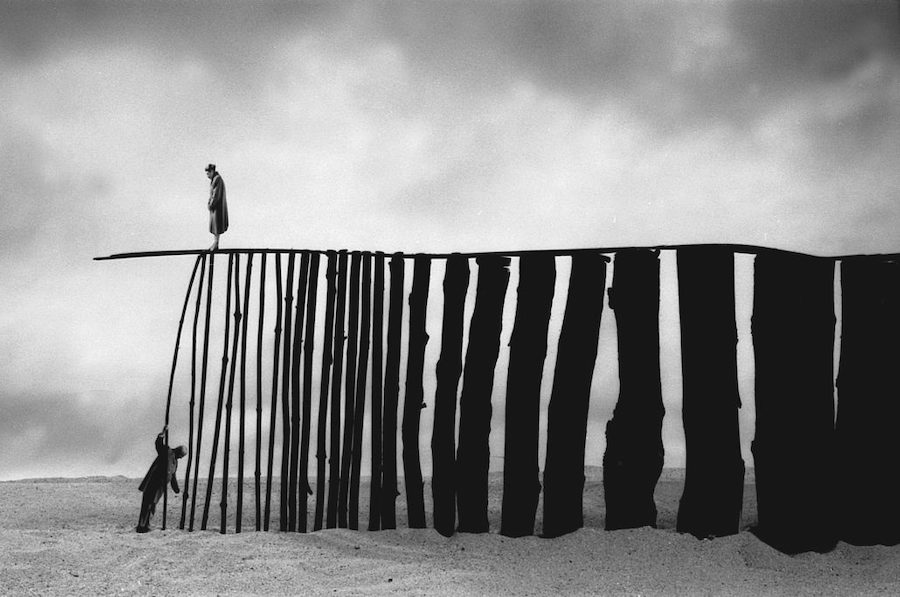 He made his first appearances wearing a hat that he soon abandoned in favour of an overcoat he had inherited from his father-in-law, a family heirloom which he kept as his hallmark until the end of his career. On occasion, he includes his wife as an indispensable complement to his storytelling. 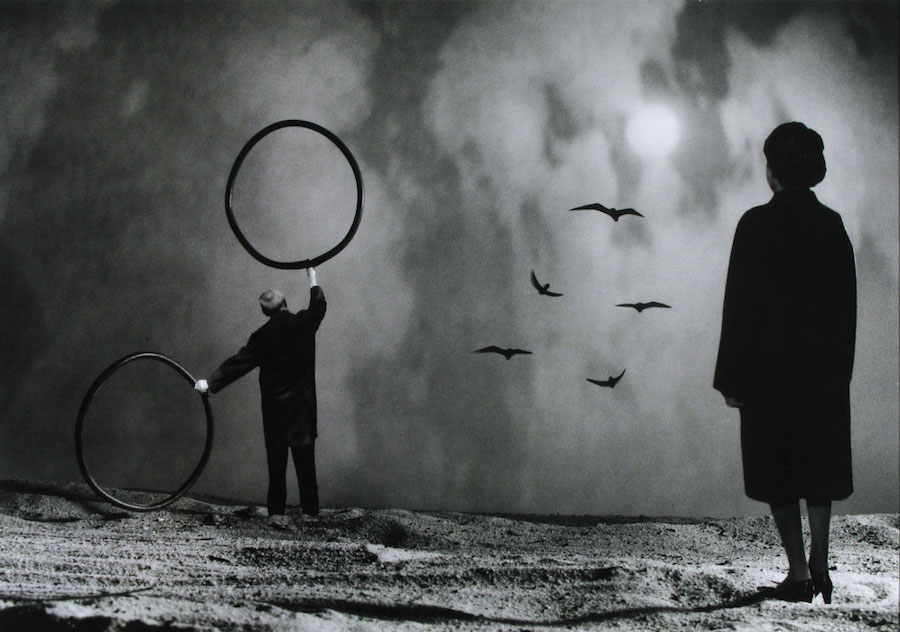 It would seem that the only references to actually influence his work are found in films of the 1920s and 1930s. His grandfather, Auguste Garcin, ran a small cinema where, in the 1890s, the Lumiere Brothers films were screened and where he lost himself in the silent films of Buster Keaton and Charlie Chaplin.

The deep sense of loneliness and atemporality that permeate his work make him an artist of great intuition, sensitivity and awareness of the unsettling world we have to live in, always leaving the interpretation up to each observer. Conveying without imposing.

An atypical artist and modern-day craftsman who created, with simplicity and an unbounded poeticism, a disjointed unity that made him a genius. And quite simply, moving. 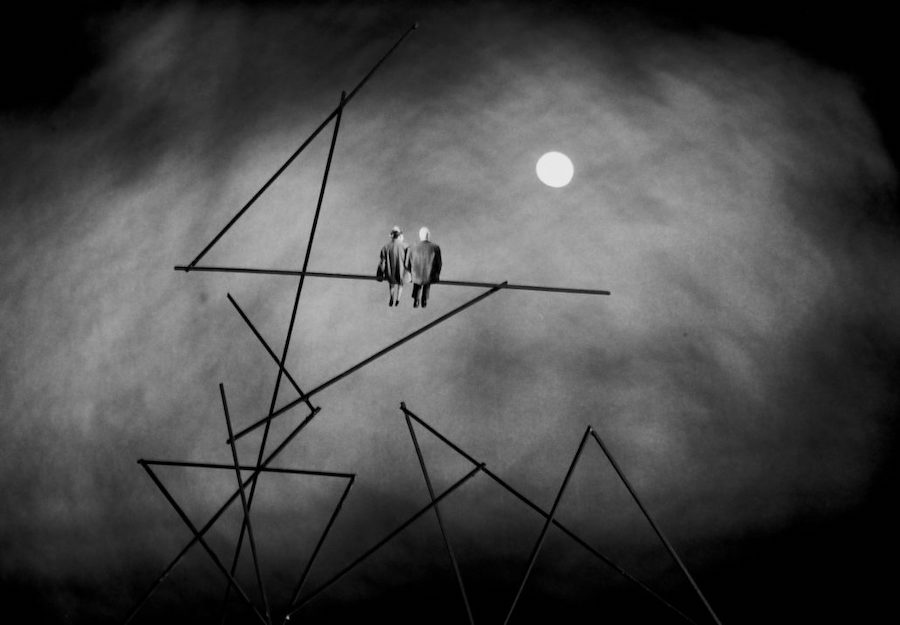 Organised by the photographer José Ferrero in the spring of 2017, the Niemeyer de Avilés Centre held the exhibition “The utopias of Gilbert Garcin” showcasing over 80 works by the French photographer.