The three Royal Academy rooms dedicated to 82 portraits and one still life painted over the last two and a half years by an almost 80-year-old David Hockney, are heavy with the sensation one experiences in Tube stations at rush hour: a hum of murmurs, a mass of human bodies and, above all, a buzz of vital energy.  Three narrow rooms without natural light or fresh air but with an all too conspicuous barrel-vaulted ceiling that,  if one's mind were to wander down to the far end of the last room, create a peculiar dialogue between the public and the characters Hockney introduces us to. A kind of living theatre. Full-body portraits, hung or rather squeezed tightly next to each other, half a metre from the floor, our eyes at the level of their lips.

The three Royal Academy rooms dedicated to 82 portraits and one still life painted over the last two and a half years by an almost 80-year-old David Hockney, are heavy with the sensation one experiences in Tube stations at rush hour: a hum of murmurs, a mass of human bodies and, above all, a buzz of vital energy.  Three narrow rooms without natural light or fresh air but with an all too conspicuous barrel-vaulted ceiling that,  if one's mind were to wander down to the far end of the last room, create a peculiar dialogue between the public and the characters Hockney introduces us to. A kind of living theatre. 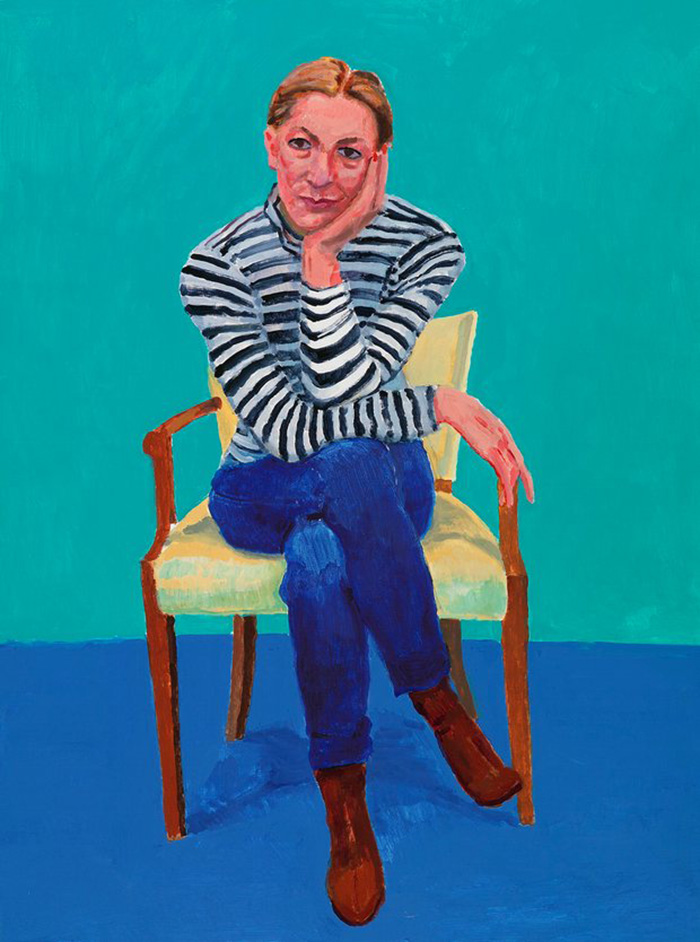 Full-body portraits, hung or rather squeezed tightly next to each other, half a metre from the floor, our eyes at the level of their lips. All of the paintings have the exact same 120 x 90 cm dimensions and the exact same pose time for the sitters of two and a half days or what he calls, using photographic terms, "a 20 hour exposure".  And the coordinates are identical. All of the models sit in the same chair, on the same platform, with a blue curtain behind. The only differences are their posture and clothes. Variations on the same theme. The background and the floor are each a block of pure colour, either green of turquoise, with no apparent criteria as to which or why. And the faces, of an otherworldly pink and purple, seem about to explode from the subjects' dangerously high blood pressure! All are from a continent where the light is different. The white light of California. Seen from a certain distance, these gleaming paintings look as if they might have been painted on a plasma screen. Art sometimes emits that light. 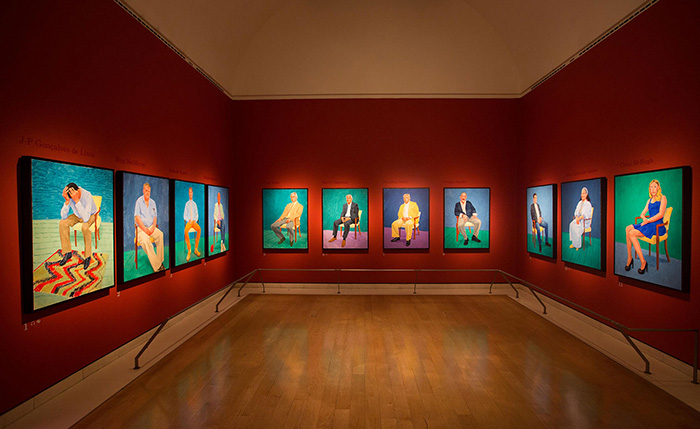 Exhibition Room : "82 Portraits and A Still Life" at the Royal Academy of Arts, London

In the spring of 2013, and for the first time in his life, David Hockney (Bradford, 1937) stops painting. It is a time of silence, also, and it lasts for months.  Amongst his small, family-like team, no-one is finding it easy to get over the suicide of one of their number, Dominic Elliott, who died after consuming a bottle of bleach during a cocaine and ecstasy binge.  Hockney decides to leave England for his house in Los Angeles and it is here, on 13th July 2013, that he paints his faithful assistant, Jean Pierre Gonçalves de Lima (J-P). Against a background and carpet of the saturated, cheery colours that are his trademark, stands a portrait that, nevertheless, portrays the fragility of life and a very deep sorrow. It is, perhaps, a self-portrait by the artist of his own mood and mental state. Sitting on a chair, his feet apart,  J-P cradles his head in his hands, elbows on knees, in such a way that we cannot see his face. We imagine he is crying. Consciously or not, Hockney has called to mind Van Gogh's "Sorrowing Old Man", that sad little old man in the same pose,  inside the four walls of a wooden cabin, the warmth from his open fire not enough to even take the edge off the cold.

The portrait of J-P, with a powerful impact all of its own, could have been the only one, isolated in its message. But Hockney's responses are never to be expected and more paintings in the same vein follow. He embarks on a new project. He shifts from the enormous Yorkshire landscapes of his 2012 exhibition, "A Bigger Picture", towards the more intimate. This is the indefatigable Hockney we know. In the era of the selfie, Instagram or photos stolen from real life via tablets and mobiles, the most important painter alive today stops what he was doing to vindicate the two types of painting either neglected or given the kiss of death by Abstract Art at the start of the 20th century: the still life, here a table/fruit composition improvised by Hockney one day his model failed to turn up to an appointment; but especially, the portrait.

In this new series, all his subjects are friends, relatives or collaborators and nothing is commissioned,  stand-alone, or meant to be dispersed, sold or given away. They are components of a unique artistic declaration, a profession of faith not just in the portrait but in painting itself.  And above and beyond any sociological aspect is the analysis of human psychology embedded in these 82 portraits.

Hockney's taste in literature would tend towards the 'heavy'. At this time, he is immersed in his reading of Balzac's Human Comedy. The sequence of portraits he has in mind becomes a visual study in humanity on a par with Balzac's literary endeavours. Hockney could never be classed as a reader of 'light' books: "Reading for me is not a leisure activity. Or a way to kill time while the world passes you by. I need a project. Something that pushes me to go on. And right now, these portraits are my engine". 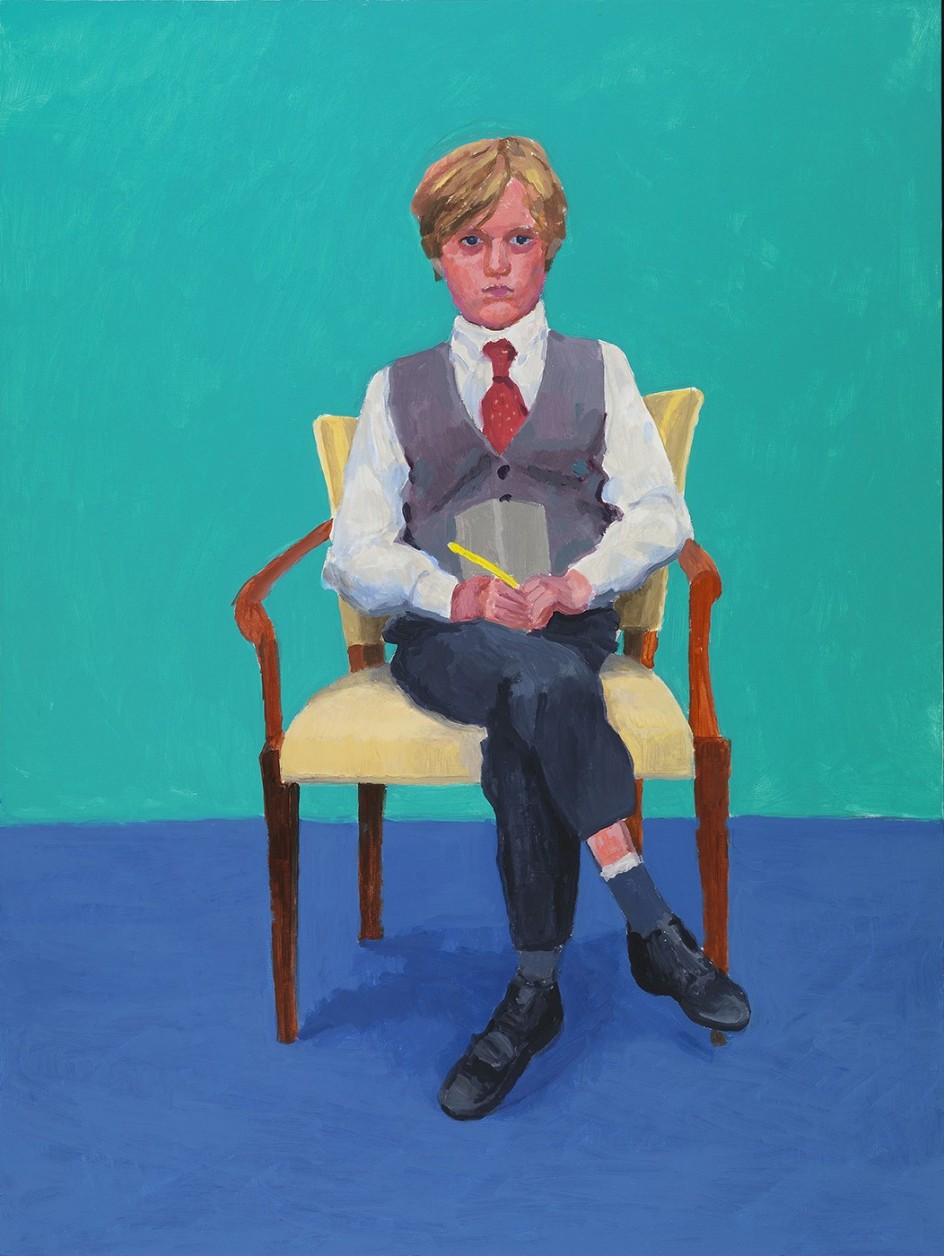 A need to paint

Hockney believes that human beings have an urgent need or pressing desire to paint, from childhood onwards. Painting comes from somewhere deep down within our roots, as do are feelings. He painted because he was fascinated by the world around him. And he still is. His eyes take in open landscapes, water, an impenetrable forest, the people he meets, plants, ..... but his real challenge is being able to translate that and reflect all he sees into the right combination of lines, dots and washes of colour. How can one relay onto canvas a visual experience, for instance a sunrise that encapsulates fleeting time, volume, air, water evaporating or light flickering? How does one capture and compress all of this onto a flat surface? Some time ago, he described this immersion into the creative process thus: "Being able to reduce things down to a line is no easy task". As well as being prodigiously accomplished at drawing, Hockney's thinking and composition come very much from a chromatic angle. He is a huge admirer of Piero de la Francesca and Fra Angelico. Aged 11, he stopped spellbound at a reproduction of The Annunciation by 'the painter of angels' on a corridor wall at his Bradford school. This is not an irrelevant anecdote. There is much of the 15th century Florentine painters in the English Hockney: clear, intense, fresco-like colours; the use of light; even his technique of alternating between acrylic, oil and watercolour which would suggest a quest for effects similar to the clarity afforded by tempera. For this series, Hockney used a new brand of acrylic paints, discovered by J-P, that he thought especially useful: the advantages of watercolour - speed, spontaneity and transparency;combined with those of oil - layer upon layer of paint, allowing him to return to different areas of the canvas as often as was necessary. 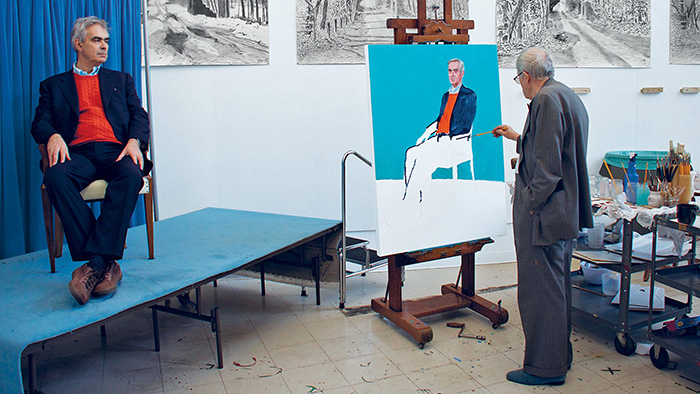 "Hockney has an inner strength that gives him the impetus to paint" says JP whilst filming a new portrait session. After just 30 minutes of carbon drawing directly onto the canvas there emerge the outlines of the facial features of Rufus, son of Tacita Dean and the only child portrait in the exhibition. Hockney has been almost deaf for a few years now and avoids crowded places but remains a tireless conversationalist. A contagious on, even. His hearing difficulties mean that he scrutinises the models' gestures, expressions and body language meticulously. For this reason, he prefers absolute silence while he works, albeit punctuated with the odd: "Pass me some cadmium yellow  ...  Give me a neutral grey, please". The colours are mixed in a couple of metal paletteson a trolley behind the easel. That same afternoon, Rufus will return to the platform. Hockney willl have positioned himself , at eye level with the boy, as with all his models, in order not to see their faces from below which would obscure their eyes. Next come the hands, which are make-or-break for Hockney: "I think the skin of the hands gives us the skin of the face. If you get the hands right, the face will always follow". At a certain point, he will step away from the easel to rub the boy's suede shoes, as if to analyse their texture. He will be thinking about the shadow they cast on the rug. And then Hockney will return to his abstracted silence and his erudite travels through the History Of Art to the Orient where shadows don't exist and a painting's tale is told via various points of light. And then he'll return to Rufus Dean's feet. Wasn't it he who said: "A shadow is just the absence of light"?