Carlos Cruz-Diez, born in Caracas in 1923, is one of the great exponents of kinetic art. He moved to Paris on October 12, 1960 with a view to making it his permanent base. He set up a studio on rue Pierre Sémard and gradually went about expanding it to include other spaces on the same street. 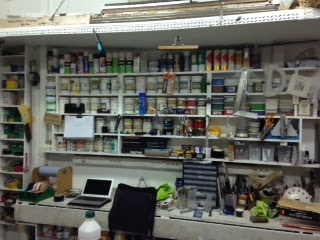 Today his workshop is spread out across a number of properties interestingly, one of his studios still has the same façade from when it used to be a butcher’s shop. Cruz-Diez has assigned a specific purpose to each space: a documentation centre (which holds part of the documentation, the rest being found in his Panama studio), a meeting room, and a space dedicated to restoration work which also contains his work archives. His work area, or experimentation studio, is quite fascinating: so full is it with all manner of tools and equipment that it could well be mistaken for a goldsmith’s workshop instead of a painter’s studio. It was precisely this variety that made the visit so informative and engaging. 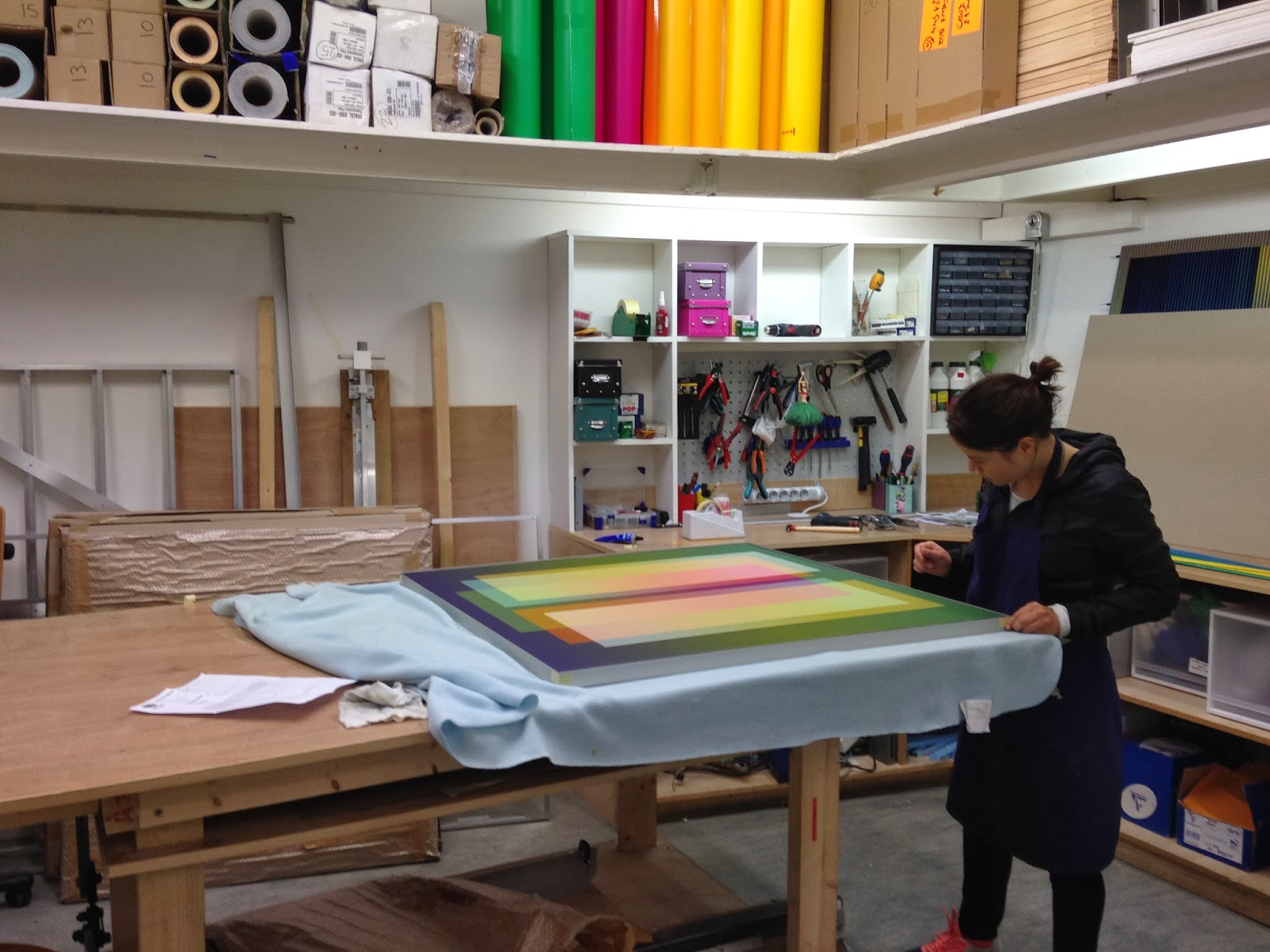 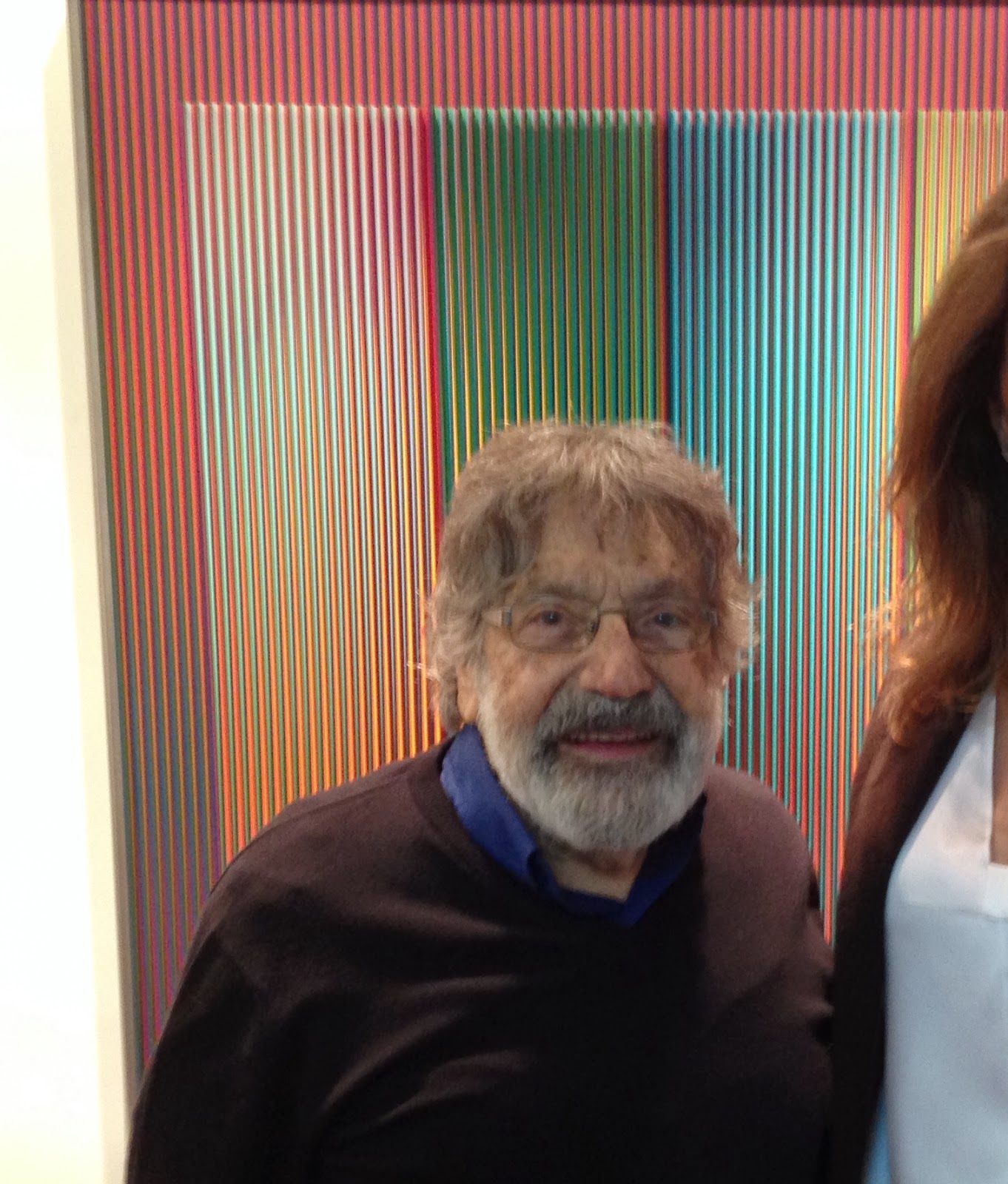 His family has continually worked together towards the long-term conservation and organization of the work and legacy of an artist who can only be described as one of the great scientists of colour.

Here we can see the artist posing in front of one of his later paintings (one which I particularly liked), displaying surprising charm and energy for a 90-year-old. 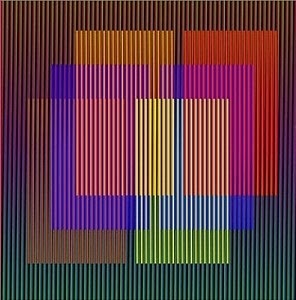 I was able to follow the great artist’s extensive exploration in colour and movement through time, appreciating how Cruz-Diez’s artistic experimentation had evolved, from the use of cardboard and wood at the beginning to numerical technology and aluminium in his later work. He has engaged in a lifelong exploration into the use of his materials, always with the aim of finding the best possible method of expressing his ideas. The one constant in his work is the perception of colour, and the feelings that colour generates in the viewer. He wants us to see colour as having a life of its own. 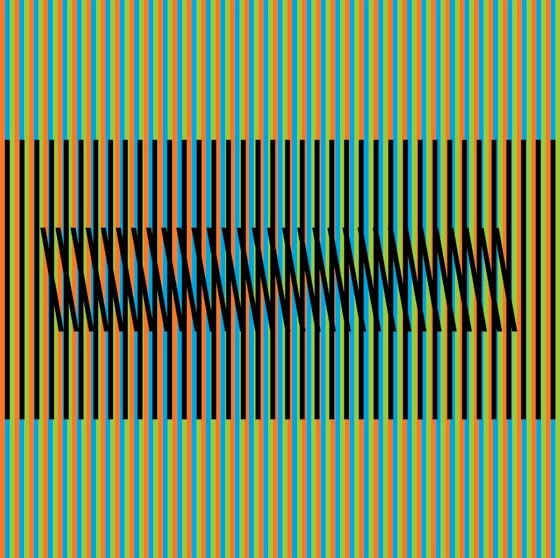 But the materials and the technique are not at the centre of his work — rather, his main interest lies in making the viewer reflect on the art. The physical painting is nothing but an instrument through which Cruz-Diez expresses his ideas to us. The gloss, the brush-strokes, the style: these are not the focal point of his art. Much like an architect, he designs his blueprint for others to reflect on it and make sense of it. A rational, almost conceptual approach. 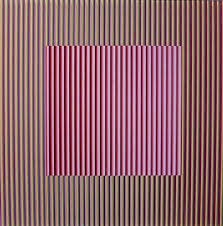 He began his artistic career as a figurative painter but quickly moved on to geometric art in the 50s. In those days he would be painting strips of colour, a particularly difficult technique since the colours would mix into one another. He would then use the sides of cardboard, wood and plastic as lines, which he would paint using different colours, until he was forced to stop due to the OPEC (Organization of the Petroleum Exporting Countries)’s oil price crisis, and the subsequent skyrocketing of prices of derivatives. Naturally, the artist took this as an opportunity to completely reinvent himself, evolving his techniques and simplifying his workflow by using aluminium. His aluminium-made profiles allowed him the freedom to explore colour in new ways. Since the 70s he’s been working with the physichromie technique, painting on top of aluminium with serigraph. This technique, however, was found to be toxic and work-intensive, and was abandoned in 2000 in favour of numerical technology.

His son, Carlos Cruz Delgado, told me that a book has been put together containing photographs of the artist’s childhood in New York in the 40s, Venezuela’s marginalized neighbourhoods and its landscapes, etc. There are also photos of the artist together with his colleagues of the time, such as Calder, Soto or Tinguely, exhibitions of which are planned for next Tuesday, February 4th, in New York, and after that in Buenos Aires and next in Paris — certainly something not to be missed!

His interventions in the urban space and in public architecture have given us a whole new way of looking at art, where changes in the viewer’s position or light of day afford a completely different perception of colour and, therefore, a different emotional state. His works are highly acclaimed across the world.


To find out more about his work and research, the Carlos Cruz Diez Foundation’s website has plenty of information on his full range of works.