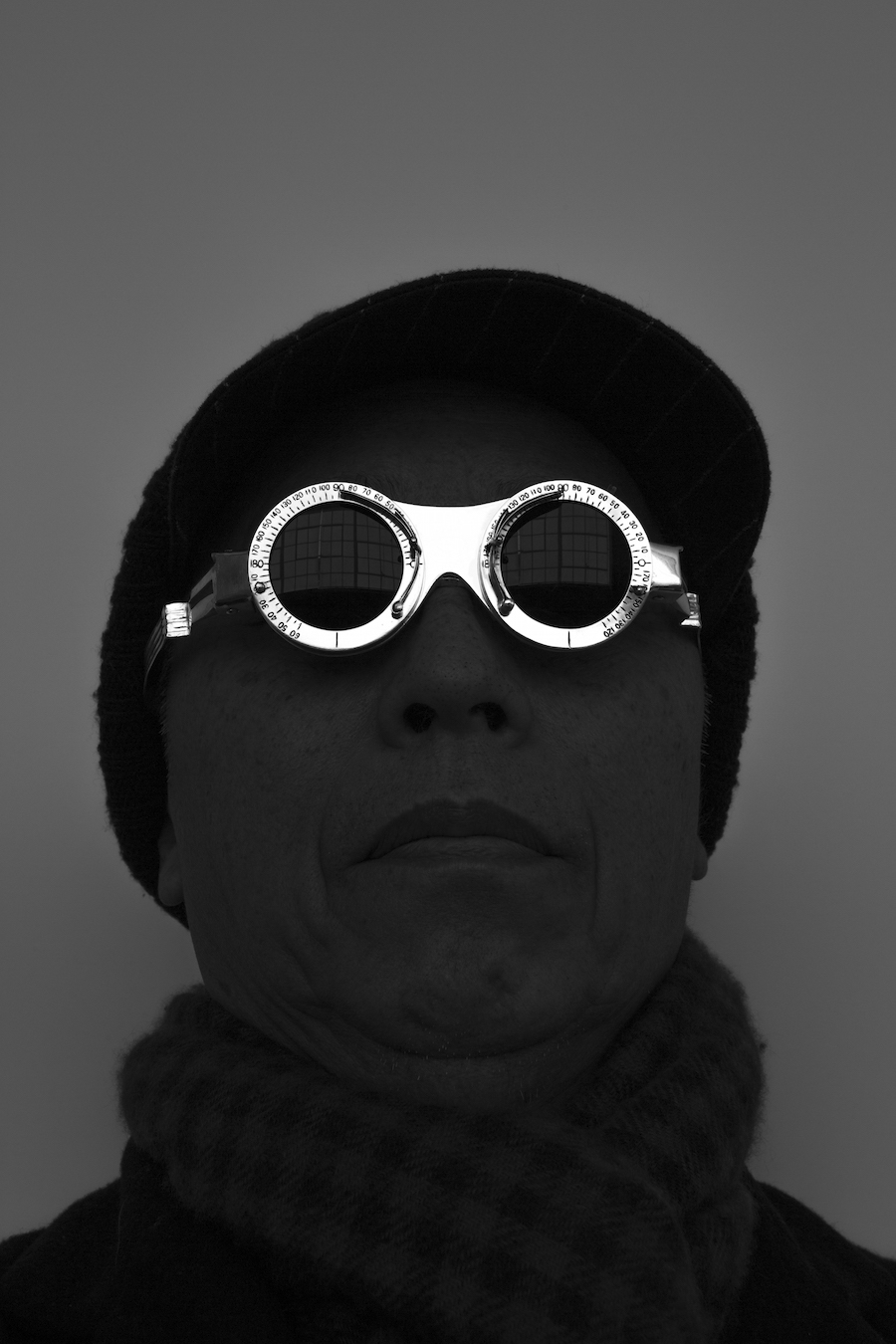 The Japanese artist Hiroshi Sugimoto (1948), is a photographer that resides halfway between Tokyo and New York. He received various awards: The Hasselblad Foundation International Award (2001), The Imperial Award (2009), The Purple Ribbon Medal of Honor (2010), The Officier of the Ordre des Arts et des Lettres (2013) and the Isamu Noguchi Award (2014).

If anything distinguishes Sugimoto's black and white photographs is its use of natural light, the shadows and the purity of forms, some close to pictoric. Standing in front of many of them, the spectator  is encouraged not only to look but also to think; as in his noted marine landscapes, its immutability causes loosing the notion of time. They invite to a constant reflection about the origin and history of the world and of our culture, where concepts like space and time are explored expanding our ways of perception.

Without further ado we begin our conversation in his austere New York studio. Large windows fill with light his office presided by two photographs: Duchamp's bicycle wheel and one of his theaters.

Elena Cué: The seascape picture I just saw in the entrance reminded me of the exhibition you presented in London (in 2012) along with Rothko's paintings from 1969, a year before his suicide, was very interesting. This photographs induce us to meditation...

Hiroshi Sugimoto: Yes, the people spent quite some time in front of my seascapes and I found some kind of similar sensitivity with the Rothko paintings. That is why I put them together. Especially the final years of Rothko - they’re very monochrome and very abstract - and they echoed my special night seascapes. 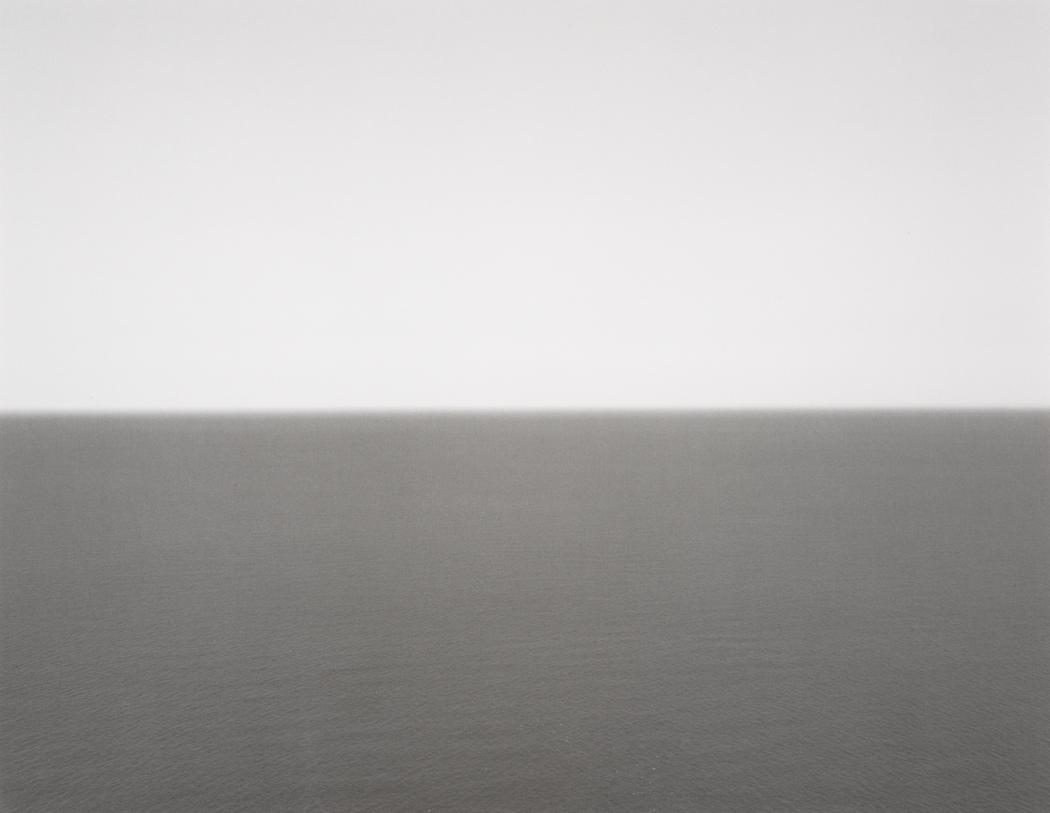 I remembered how your photographs gained in beauty once their protective glass was removed. They looked just like paintings.

Yes, but they have the price of photographs!

Is Eastern spirituality implicit in your work?

Well for marketing, it reaches a wider audience if I don’t use ‘Eastern’ or ‘Western’ spirituality!

Your In Praise of Shadows series is directly reminiscent of Tanizaki. What is the enigma of shadow for you?

Which kind of light do you prefer to use?

What do you think of the current aesthetic of light, someone like yourself who belongs to a millenary civilization that is antithetical to Western civilization?

Well, Tanizaki complains about modern society with its artificial light. Since humans invented artificial light, our lifestyle has changed. Especially with electric power. With candlelight, there was a more human-friendly atmosphere. Then all of a sudden we have nuclear power and electricity… so then we changed to nightlife. It used to be nice and intimate, and somehow it was the poetic quality of nightlife that we all lost. There is a beneficial side to it, but not that side. We lost so much, instead of gaining some kind of benefit.

Now that we have discussed light, let's turn to emptiness and loneliness. Why, in your Theaters series, is the lighted stage empty?

They look empty but they are full of information. They have accumulated the information of many millions of small photographs that a movie consists of. Before the invention of movies was the invention of photography. To make a movie, you have to sew single-shot photographic images together to make it look like a movie. It is all an illusion to the human eye. So there are many pictures within the white. It’s not empty, it’s too crowded! 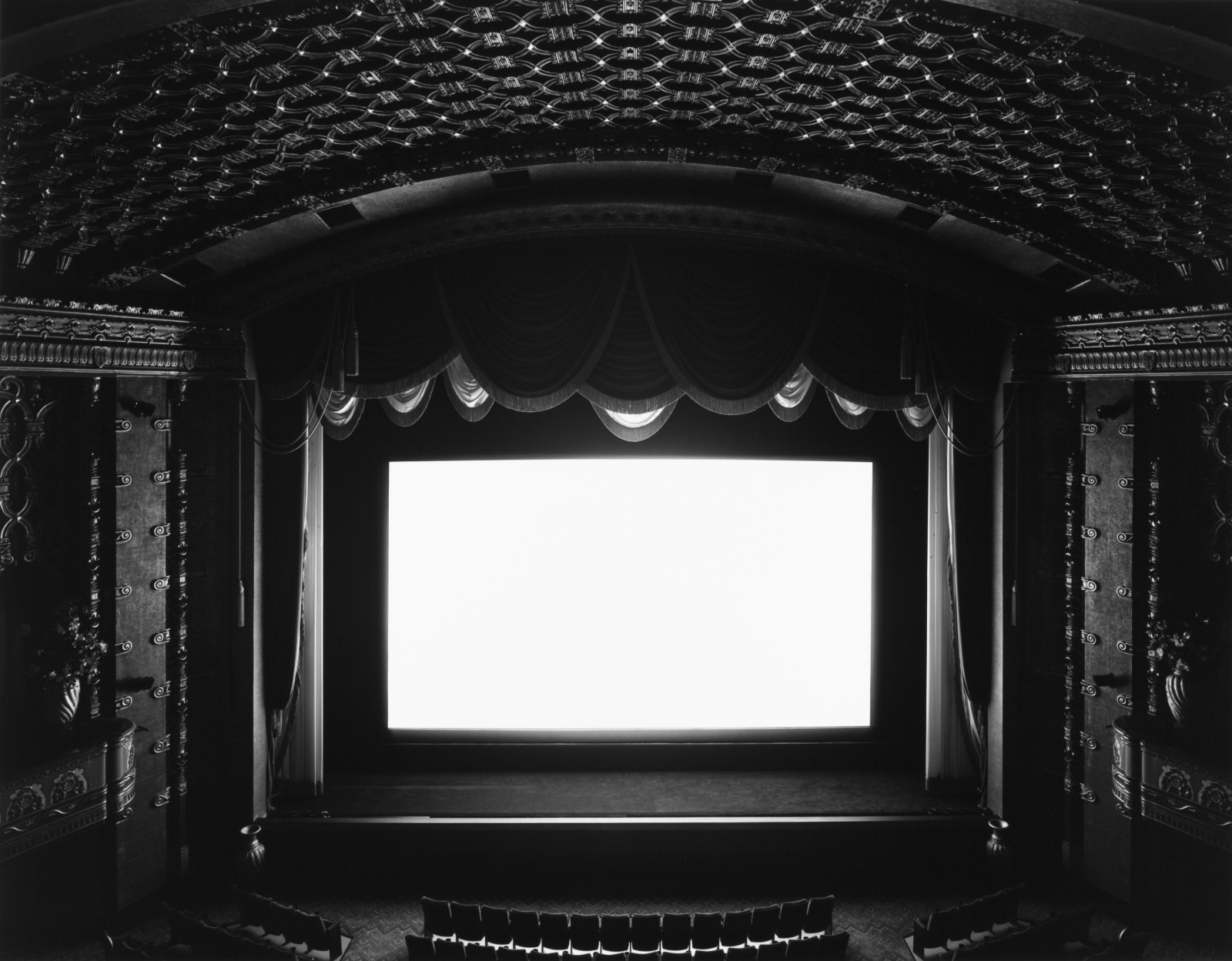 Your work constantly evokes primitive scenes. How important for you is that infancy of the world?

I feel like I’m a stone-age man. I try to go back to the original roots of our mind, of our consciousness, that maybe we lost many thousands years ago – or maybe only fifty or one hundred years ago. The human mentality was somehow different. That’s what Tanizaki’s In Praise of Shadows is telling us. Again, this is modern societys' negative side and positive side. That’s what I’m trying to save, before it is completely lost. 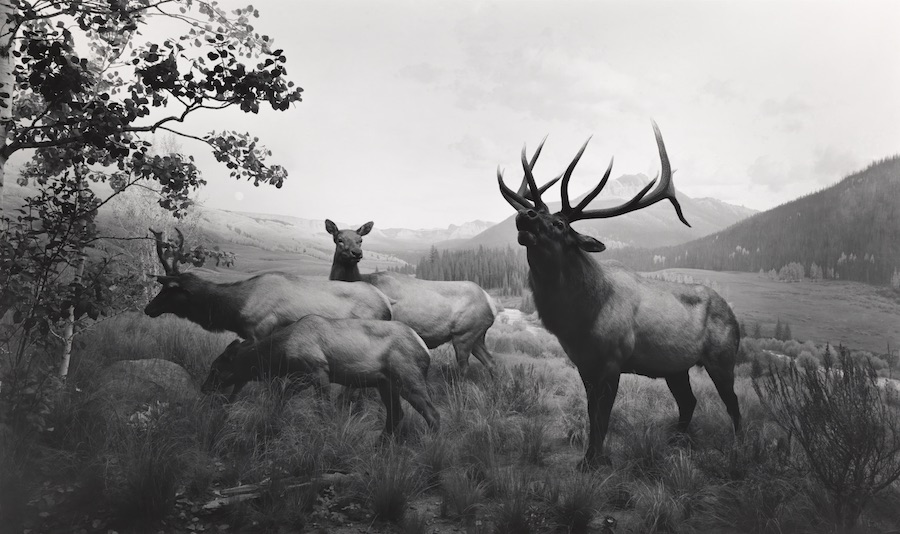 With such beautifully dramatized light as yours (your use of chiaroscuro), to what extent would you say you are a pictorialist?

Pictorialism was a very interesting phenomenon in the late nineteenth century, after photography was invented. Many painters changed their profession to photography. But twenty or thirty years later, there was a fight back from the painter’s side. Also, it was asked whether photography could be art or not. The camera is a machine and the machine has no spirit. So photography makes machine-made paintings. Photographers developed some sort of complex against painters. So the photographer tried to imitate the painter, which is where pictorialism entered photography history. I don’t have any complex, but I’m still trying to be a painter.

Was there a period when you painted?

Well yes, I painted when I was in High School.

But you decided not to continue...

It wasn’t that I couldn’t paint and instead decided to become a photographer; I can still paint, but photography was a new medium for me. So when I was young, I thought that photography held more possibilities for the future, to be used as a new kind of tool to create new art. Painting is one of the oldest mediums in art for the human being. People have tried many different things and there’s too much competition. I wonder whether I could be better than Picasso – that’s the question!

We have already touched upon the exhibition that you recently presented with Mark Rothko in London. You have said that he helped you on your path to abstraction via photography. Could you tell me about that experience?

Well, to compare myself with Rothko is a brave act! I had a sense that we might share some kind of similar mentality or spirituality. Don’t think about the market price; I cannot compete with him! So that was something to almost surprise people with photography and painting’s relationship. What is trying to be represented? That kind of abstract spirit can be shared with the photographic method. And in a sense, I think it was a success. One of my next projects in the near future will show Impressionist paintings together with my seascapes. Because I knew that Monet painted seascapes in Étretat, in Northern France, so I went there and I found the spot where Monet must have painted them. I took the seascape photographs from the same point. Not the landscapes, only the seascapes.

How beautiful!, so this will be your next project. Where will it exhibited?

It is not decided yet, but I am working on it now.

Any future projects in Spain?

In February I will be at Fundación Mapfre in Barcelona. Then in June I’ll be at Mapfre in Madrid, which will be a retrospective.

So that will be a very important exhibition for you.

Yes, it will be my first retrospective in a museum in Spain. Afterwards, it will travel to Brazil in South America.

But you did visit Spain before, I recall your traditional Japanese puppet theatre: The Love Suicides at Sonezaki.  What does Bunraku mean to you?

I’m moving more into the performing arts, especially the traditional Japanese performing arts. So bunraku is the one that I’m doing now. I’m trying to remake traditional theatre. Sometimes, the way they perform is not the way that it used to be. The production is from the 18th Century, so I’m always trying to get back to the original spirit. For my production, the lighting especially is not so bright. I have to use artificial light of course, but I’m trying to create an atmosphere of pre-modern traditional theatres. This sense also derives from the kind of quality found in In Praise of Shadows. 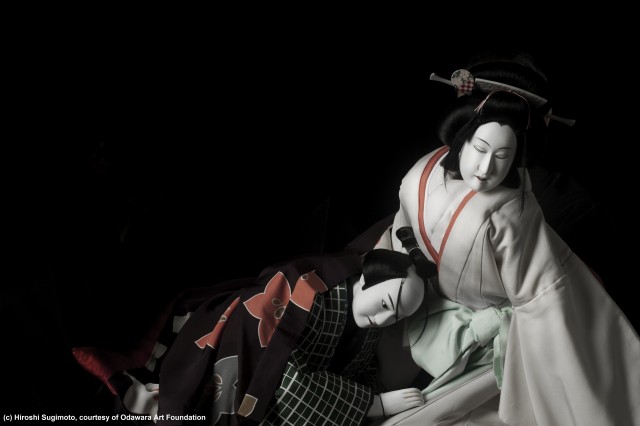 Yes, a different kind of art form - traditional storytelling at the Comédie-Française. Old stories with lots of jokes.

He must have had some influence on you…

My cynical mentality comes from my father!

And what did you receive from your mother?

My mother was a very good businesswoman, a very well balanced person. She was spiritual I think… religious, even. For a long time, she was a Christian. She was sent to a missionary school in her childhood.

And did this change you at all?

I got a sense of what Western civilization is like. I was in a boys' school at Junior High and I was fascinated; I became almost hypnotized by people singing to the Christ. It made me think, ‘Wow, God really exists!’

But later you changed again?

Later I moved to California and then people spoke about Buddha. So I didn’t switch, but I studied Christianity and then Buddhism. They are two totally different branches of spirituality.

Then your work lost part of its Japanese spirituality?

No, even in American people I sometimes find spirituality! I decided to be spiritual, and to keep an equal stance on all religions. The more important issue is about what the origin of religion and spirituality is. Our stage of human consciousness all started with the development of the sense of time and the sense of awareness, which all comes with a religious impact. So it’s all related, and it’s related to my seascapes. To think about the religious mind… why is it when looking at nature or the seascapes, you feel something recall your old memories? Either a personal memory or a memory of humanity.

In your Portraits series of wax figures at Madame Tussauds, there is something reminiscent of those traditional Japanese theatre puppets. Did you choose them: because of their caricature essence, because of the type of character or because of the technique?

When I started, it was really nothing to do with the puppet theatre. I can see the relationship, though. It’s more related to the history of photography. Madame Tussaud was a wax figure maker in the 18th Century, at the time of the French Revolution. So, somehow it’s a kind of diagram as well, a fake mockup of nature. That is how the first stage of photography came about. That is what they were seeking: to make a copy of reality. So even before the invention of photography, the wax figure was a representative medium. People used to believe that everything being photographed was representing reality, but now we have lost this reality because of the invention of digital cameras. I just want to fool people… There is a photograph of Catherine of Aragon the Spanish Princess, and people tend to believe it! But how can I shoot her, from the 16th Century?

To me, your pictures in the Architecture series were almost like the works by Richter. I’m curious to know what do you think about that…

And what about Duchamp?

Well I think I inherited my cynicism from Duchamp – as well as from my father! They are the bad boys…