Recently inaugurated in Lisbon, Rapture, is the largest exhibition by artist and political activist, Ai Weiwei, (Beijing, China, 1957) described by The New York Times as one of the most important critical artists of our time, with his eloquent and unsilenceable voice for freedom. The exhibition title has various meanings; one is the “transcendent moment that connects the earthly dimension with the spiritual dimension.” Another is the “hijacking of our rights and freedom” 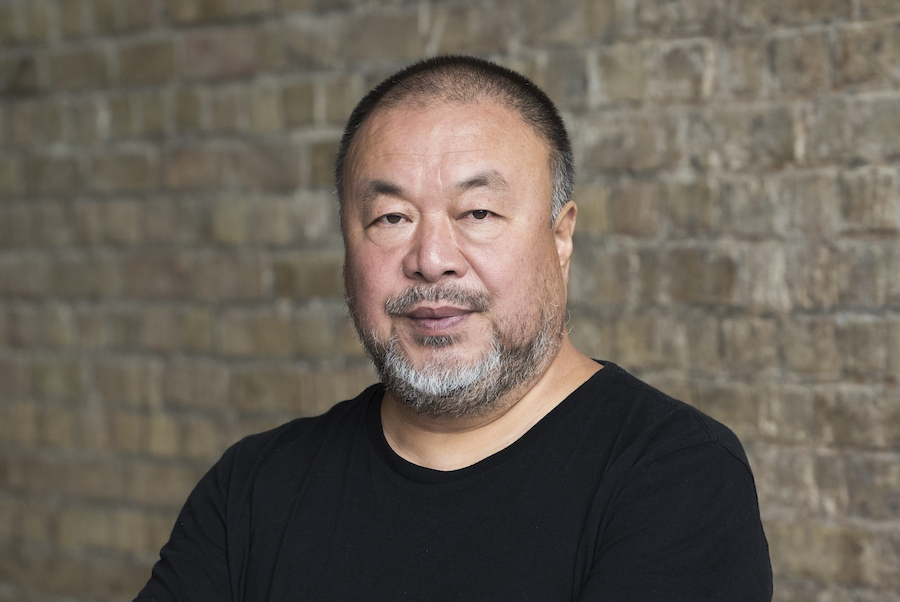 Recently inaugurated in Lisbon, Rapture, is the largest exhibition by artist and political activist, Ai Weiwei, (Beijing, China, 1957) described by The New York Times as one of the most important critical artists of our time, with his eloquent and unsilenceable voice for freedom. The exhibition title has various meanings; one is the “transcendent moment that connects the earthly dimension with the spiritual dimension.” Another is the “hijacking of our rights and freedom” and this significance may well encompass the definition of the artist’s own life. A life which began with the vital experience of anguish and rupture when his father, the poet Ai Qing, is sent to a labor camp with his family and subsequently exiled during the Cultural Revolution by the anti-right movement, instigated by Mao Zedong. A lot of the inspiration for his artistic creativity stems from examples of lives torn apart, like those confined to refugee camps, lives ripped of freedom, lives destroyed as in the human flow of emigration, cries from corruption and totalitarianism or of sorrow by the ease with which human rights are violated.

Could you tell me about your exhibition Rapture?

It is an exhibition that includes works dating from the 1980s to yesterday, just before the exhibition opened. It contains eighty of my works, many of them are major works. It is the biggest exhibition ever organized, approximately four thousand meters squared in total and includes old and new works, installations, films, photographs and videos. It is a collection of all kinds of different works.
Which of the pieces from your exhibition has the most relevant meaning to you?
Every single work has a certain meaning and no one piece could take the place of the most relevant for me. I could not select one specifically because they are all from different periods. To me, they are all important.

After all, your work is a narration of your life, it is your biography.

Yes, it is like a biography. It would really take a considerable amount of time to contemplate all the works due the numerous videos and movies. They do indeed tell my story. 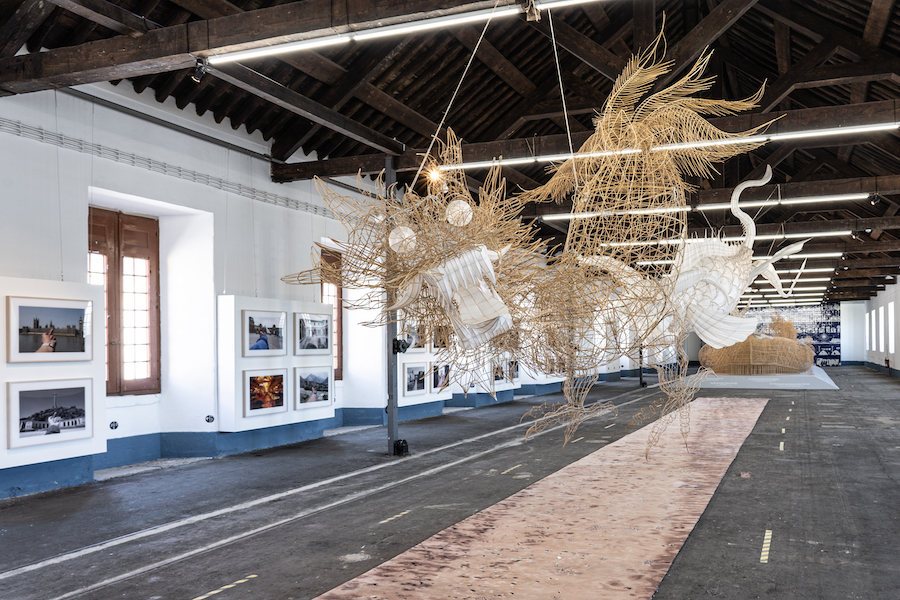 The most recent works in this exhibition are a reflection of your Chinese roots. What values did you learn from your father, the famous poet Ai Qing?

My father’s life was very dramatic. He was a poet who had a strong influence on Chinese revolutionaries. After the nation was established, he was criticized as a rightist and was exiled for 20 years. During all those years, he was forbidden to write. I think my father is important, he was always very open and positive in a very innocent way, which made him very strong, to the extent that even the political storm could not really change him into another person, he remained true to himself.

You use art as an instrument of social and political awareness. What do you think about artistic creations without a purpose?

I believe that to think of art as not related to reality, humanity and even human struggle is simply not art. At least, it is not the kind of art I would appreciate or even understand. Otherwise, why do we need art? Nature is much more impressive. If you look at anything from nature, from a leaf to water, you would notice it is much more complex and much more beautiful than anything an artist can create. Artists must create emotions and an understanding of who we are and what kind of society we are living in. Just like literature and poetry, there is always some kind of hidden intention. It is not just a string of empty words and vocabulary, that is impossible. Art has always been misunderstood as a decorative tool, as if it is trying to decorate some type of life, but that is nothing more than a misunderstanding of the function of art.

You use art as a platform to voice and help the less fortunate defend their human rights and freedom of expression, but what does art do for you?

What I receive from my practice is life. Life itself is a practice. Without practice, there is no life. It becomes me and I become what I am trying to be as a piece of art. I need to find a language to define my life. If I do not find that language, it is simply as if I never existed or I never had a life.

Rapture also presents your last documentary Coronation where you talk about China’s "ruthless efficiency" in the face of the pandemic. If compared to the leadership of other countries such as Brazil or India, it seems like this merciless management has prevented many deaths, suffering, economic dramas ...

If you look at the numbers, yes, China is very successful. At the beginning, they said there were only 3000 deaths, now there are 4000 but the numbers were never true. Yes, they controlled the disease but at the same time, they controlled people’s spirit, people’s understanding about life itself. People have the right to be free. The state should not have that kind of power, a military type of power to supposedly ‘take care of people’ but at the same time really unhinge them. There is no humanity in that. You cannot treat people like animals. The state has become over powerful but yes, I should say that it has successfully controlled the disease. 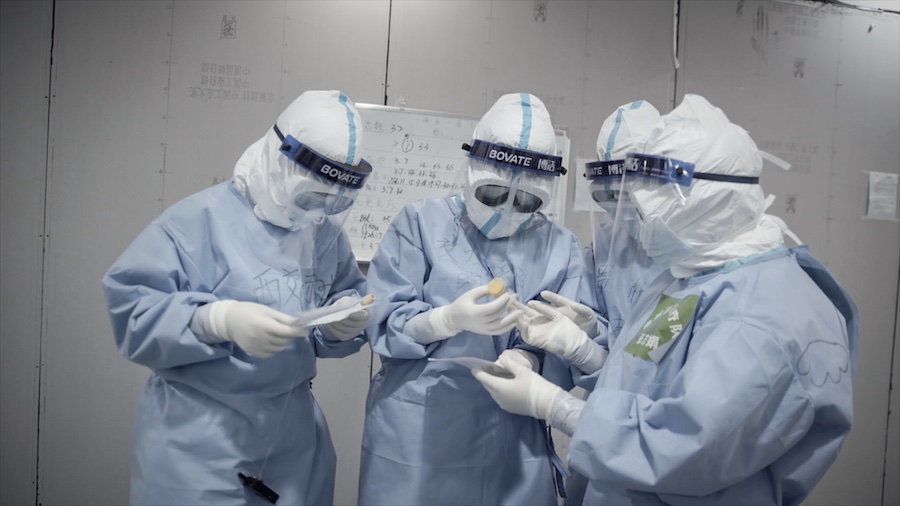 China deprived its people of their freedom but protected its nation during the pandemic. What do you prefer: freedom or protection?

Freedom is not an empty word. Freedom includes our individual consciousness and our way to protect ourselves, others, and society. The individual must defend their rights. The government has no right to tell people what to do. It can make suggestions and organize resources, but it is in no position to force people to do anything.

What do you think about the European Union’s support of Biden's request for a new investigation into the origin of Covid in an attempt to ensure it never happens again, as stated by the president of the European Commission, Ursula von der Leyen?

Firstly, you can never really find out what happens in China. It does not matter if you carry out an investigation or not. China, as a society, has a certain characteristic that will ensure many things will remain a secret and nobody would be able to find out. Not only in this instance but also in every other political disaster, they never reveal anything truthful. Of course, today, I think we should understand the nature of the disease to prevent it happening again and avoid it happening every year. This is the biggest disaster and China, as a responsible large nation, has the duty to tell the world what really happened at the beginning of this disaster. However, I am convinced they will not let anyone know.

You have been very active in raising awareness about the problems caused by climate change. What do you think of the recent commitment made by China and the United States to reinforce the Treaty of Paris and collaborate in the reduction of greenhouse gases?

I like it. It is a positive step in the right direction. If China really commits to it, it has the potential to be very efficient. This is something every politician talks about, however, it is very hard to measure what is actually being done. Each nation is at a different stage of development and therefore they have very diverse ideas on how to limit this kind of behavior or how to take action. Nevertheless, it is good they have started to talk about these issues.

Which image from the past year has impacted you most? Crematories on the streets of India, cemeteries in South America…

There are so many, too many in fact, so again it is very hard to select just one. There were simply too many shocking images.

The refugee crisis and the “human flow” of migrations are central themes in your work that you particularly want to accentuate. The dignity of the human condition is at the heart of your concerns. In effect, you grew up as a refugee yourself because of your father's situation. What positive aspects have you drawn from such a traumatic experience?

As you said, I grew up in China, in a way, as a political refugee myself, so I am always wondering how Europe is dealing with the situation. Now I realize Europe is trying to look the other way and ignore the refugee crisis. Personally, I am extremely disappointed by this behavior. Thousands of refugees are being pushed away and have lost their life in the ocean. That is a fact. A lot of children, women and elderly people are just being pushed away. They cannot even reach the border. And even if they do reach the border, they (the authorities) will not let them through. This is an unthinkable situation. I could never have imagined that Europe would be capable of that, but they really have done it and in plain sight for everyone to see. It has changed my perspective on our human condition.

What is your opinion on the agreement reached between the United States and Spain in favor of “migration carried out through regular channels and in a safe, orderly and humane manner" as stated by the Secretary of State Antony Blinken?

I think if state policy is only choosing to talk about the humanitarian crisis as a tactic, it is a hypocrite. The US is still involved in wars, selling weapons to many nations which should not even be considered as democratic societies. I believe the US is responsible, and should be held responsible, for many other humanitarian crises happening around the world: what happened in Afghanistan, the US relations with Saudi Arabia, and many others that are very questionable. Therefore, when they talk about providing humanitarian help, first, they should stop producing war machines and stop interfering in many regional problems, not to mention the many other problems they create.

Meanwhile, you have opened another exhibition Marbre, Porcelaine, Lego in the Max Hetzler Gallery in Paris. What vengeful work can we find here?

The show follows my activities from recent years. My porcelain and Lego works portray motifs related to the migration and refugee crisis, which could also be called a humanitarian crisis. The idea is to combine the well-developed tradition of blue and white porcelain in China with the modern practice of the material Lego to create a unique expandable strength. 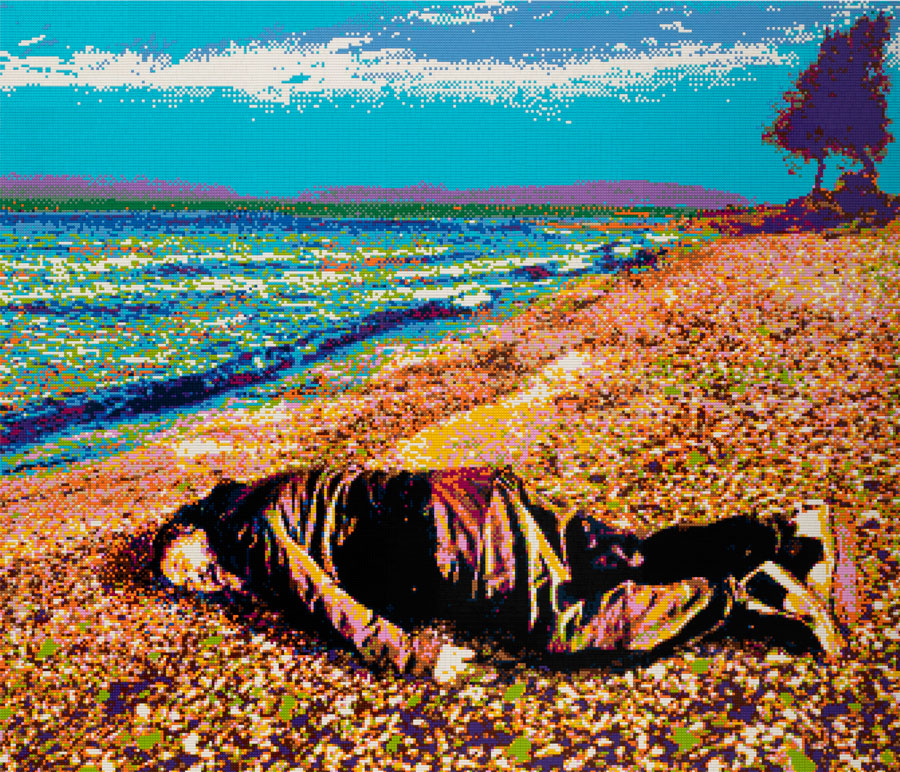