Does science distance us from God? Professor of Economic Structure and member of the Royal Academy of Moral and Political Sciences Ramón Tamames (Madrid, 1933) delves into the cosmology between scientists and philosophers in the already longstanding quest for the Primary Cause or Higher Intelligence as origin of the universe. The title of his latest book 'Searching For God In The Universe. A worldview on the meaning of life' (Erasmus) gives a clue as to its contents.

Does science distance us from God? Professor of Economic Structure and member of the Royal Academy of Moral and Political Sciences Ramón Tamames (Madrid, 1933) delves into the cosmology between scientists and philosophers in the already longstanding quest for the Primary Cause or Higher Intelligence as origin of the universe. The title of his latest book 'Searching For God In The Universe. A worldview on the meaning of life' (Erasmus) gives a clue as to its contents.

Essentially, it's just a case of my keen interest in cosmology and how little I may or may not understand of advanced physics. I'm also interested in the origin of everything and the meaning of life. And it's not actually that I don't have faith. In fact, I don't really get involved with revelation or mysticism, the usual channels that lead to faith. I respect it, though. Actually, I had a Christian upbringing and I've never stopped experiencing "moments" in that regard. I'm not a practitioning Christian but there's always "that certain something".

Have you arrived at any conclusions?

Yes, in that physics doesn't have all the answers or that it does but in a somewhat fantastical way. For example, Hawking told us that the universe was born by chance from a quantum fluctuation that produced the Big Bang. Naturally, that explanation leaves us cold, because ... what's behind all that? Where's the sense to it? That's what I've always wanted to research because, at the end of the day, the notion I have happens to very closely match that of one of my heroes, Isaac Asimov, who says that we're a staged planet: we're here and we're being observed by someone seeing how we manage, what evolution we follow and how we behave.

Would you say that was the crux of your search?

Alongside the meaning of life, there's someone at work behind it all, a superior intelligence that ushered in the Big Bang, gave rise to the computer and set material and biological evolution in motion.

What would this God have to do with the Christian God?

The act of creation. Essentially, the 'fiat lux' of the Vulgate, or the Latin version of the Bible, means "Let there be light". Many scientists say they don't like the Big Bang Theory because they think it's got a theological context. They say it's like God from the Book of Genesis. But that's just them arguing for argument's sake because the universe has to have had an origin and the most logical one would seem to be that one. I think the Christian God is a Judeo-Christian revelation belief. I respect that and I don't judge it. That's the Christian God and the Son of God. But it's a revelation. I come from a scientific viewpoint and I understand that God, as a superior intelligent being, might have many human manifestations, one of them being that of Christianity but, personally speaking, I think that's the most exalted of all the manifestations – because we're very influenced by that whole culture.

Have you encountered God yet in this quest?

No, I haven't. In any case, what I don't claim is that a God will reveal itself via a voiceover going "Here I am". Everything to do with creation is so absolutely left-field that I've ended up agreeing with the Seven Wise Men, as reflected at the end of my book. Not by reason of a criterion of mere authority but because they were brilliant people who've spent a lot of time thinking all this through. But in any case, I sense there's a higher intelligence that governs everything.

To sense God through science is possible. But do you think it's also possible for there to be a scientific basis for God?

That's the exact struggle between deism – although I don't much like that term – and militant atheism, such as that esposed by Richard Dawkins, the biologist. In any case, there's no solid path of 'basis' via science because if there were, we'd all be living in unanimity. Show me that DNA contains four bases and how that's what all living things are formed from. And tell me that's God's alphabet. But it's a parable, not a reality. If there were any proof, there wouldn't be any controversy.

You say that, in the 1980s, many scientists adhered to the belief that evolution didn't happen by chance or necessity, but by way of a teleological principle, namely, that it has a finality.

That's something that's been argued since at least pre-Socratic times, for over 2,500 years. Suffice it to say the discussion is a permanent one. Aristotle was already saying of Leucippus and Democritus that they had to have been drunk as skunks because they were going around saying it made no sense, when everyone knew, including Aristotle, that it did make sense and that there was bound to be a teleology.

And what do you think?

I think it's an ongoing discussion that, in a way, opens up into the philosophy of the meaning of life. Kant himself, around 1790, wondered what the point of it all was, giving rise to these four famous questions: What can I know?; What should I do?; What can I expect?; What is Man? And that way of thinking is typical of the Enlightenment. And what is the Enlightenment? Well, according to Kant, it's reaching the age of maturity.

That's where we're at. If I could offer any definitive examples, I'd give them and be over the moon! Actually, I sent my book to the Pope and his Secretary of State replied to me with an autographed photo of him. Saying nothing at all.

I think that's always happened. In the Century of Reason, Baron d'Holbach stopped believing in God and laughed at Christians. The thing is, sometimes it's been more tolerated and permissable than others. Nobody can doubt that in 16th and 17th Century Spain, anyone agitating too much in that regard got what was coming to them. In that sense, there's always been unrest. What's happening now is that people demonstrate more via social media, they're bolder, knowing full well that public freedoms and guarantees allow them to do so. The media are very much to blame for hypertrophy. They induce changes in the general mindset, no doubt about it, and things that were unacceptable in formal societies a hundred years ago are acceptable now.

How do you see the Spanish economy right now?

I'll say something that may seem like an exaggeration but it isn't. The economy is doing quite well and comparatively better than the rest of the European economy, despite the politics, because political instability is having quite an effect on it right now and despite the Administration, which I would call a great lumping monstrosity of a thing and an absolute disgrace. I'm not talking about the doctors, I'm not talking about the police, I'm talking about the Administration itself, the change in policies, in the fundamentals, and also, obviously, the bureaucracy because the problem with bureaucrats is not only that they cost us more and more money every day, but, as they have to prove they're useful, they delay and complicate everything.

This country is doing well despite its Administration, which is a great lumbering monstrosity of a thing. There's the answer. And why is it doing well? Because we have the best entrepreneurs in our entire history. And our stock market, Ibex 35, is symbolic of this entrepreneurship we have. There'll be some doing better than others but that a group of companies does almost 70% of their business outside Spain means that they are competitive. That's what you have to recognize.

Which economic proposals do you think would be needed for improvement?

There’s no lack of proposals. And fortunately we have proposals that are very positive indeed, that come to us from outside the country. My opinion is that "Super Mario", aka Mario Draghi, has an impressive policy for European economic recovery and he hasn't allowed the Euro to go under. And I think there are many other recipes for success but they're being obstructed by the 18 ministers we have, the corresponding secretaries of state, the thousands of director generals, and so on.

You write that skepticism is growing about whether CO2 and other greenhouse gas emissions are causing global warming. And you speak at length, warning of the danger we face in the short term in your book 'Facing the Climate Apocalypse' (Profit Editorial).

That's where most of the uncertainty lies, actually: the fact we don't know if we'll be in time or not. Someone well-versed in this, James Lovelock – who worked at NASA and is the author of the Gaia thesis – argues that Earth is a self-regulating organism and that at any moment Gaia's revenge might come, namely, to expel man and let evolution continue on, but without the human species. Perhaps that's a scientific exaggeration to make people wake up, just as the young Swedish girl Greta Thunberg has done, saying that climate change is humanity's worst and foremost problem.

The problem is whether we get there in time or not ...

I have my doubts, serious doubts. Not exceeding 2°C above the temperature benchmark set before the beginning of the Industrial Revolution as the main objective of the whole 2015 Paris Agreement is a pipe dream. What's clear is that we're continuing to accumulate greenhouse gases and that the symptoms are fatal not only in the Arctic and the Antarctic, but also in glaciers and droughts, etc. The problem is to get them under control before it's too late and Lovelock says we won't.

Why is it a pipe dream?

Because China will continue to emit greenhouse gases without curbing them until 2038. And the U.S. has also, theoretically though not legally, withdrawn from the Agreement. It's true that many of the states over there, especially on the West Coast, are doing an impressive job of reducing carbon emissions. But the point is that we haven't taken the problem seriously enough yet and the deniers are still out there. The Paris Agreement needs to be revised.

How can we decarbonize society and take care of the biosphere, without doing economic damage?

There's no problem there. The Paris Agreement, and all of its members meeting every year, more or less foresaw and saw to that. The last summit was in Katowice and, if nothing else, they agreed on accepted methods by which to measure emission reduction, which is no small thing.
I think the Climate Act, a good plan in the making, is a great start and we'll be opening some plants and closing others. And renewable energy is moving very fast. But we're still without a coherent plan. Teresa Ribera, the Minister for Ecological Transition, said to expect it by Christmas. I think the European Union is doing a good job. It has set some objectives that are attainable but the problem is whether or not they alone will suffice. 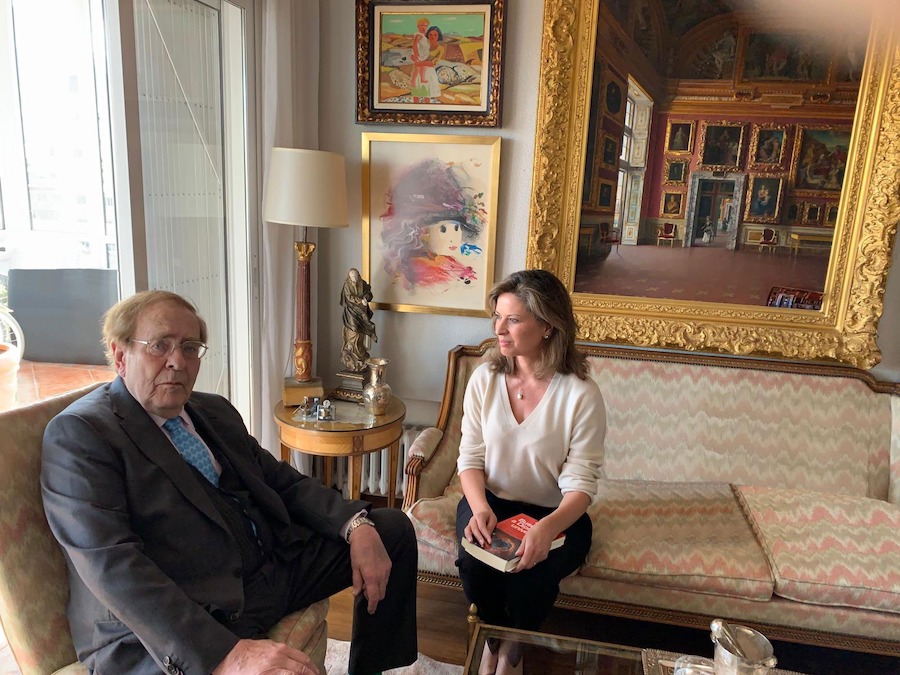