In Lisbon, on the banks of the Tagus, is the studio where the artist Joana Vasconcelos (Paris, 1971) deploys all of her creativity. With her I made a tour through the technology rooms, the foundry, architecture and sewing rooms of the world of this Portuguese artist who conquered Versailles.

Elena Cué: Her birth in Paris was a result of the asylum her parents asked for in France when they escaped from the Salazar dictatorship. What configured the presence and affirmation of her roots and identity in her work?

Joana Vasconcelos: The fact that I am a Portuguese artist today is the political outcome of the dictatorship that conditioned many people in Portugal and Spain. My parents were in France and I was born there and the truth is that their life would have remained in France if there had not been the Carnation Revolution (Revolução dos Cravos). I think they would have stayed there and today I would be a French artist. Internet allows the artist to live in their country and to export their work without problems. People reflect their identity, but not only where they come from but also where they are; in other words, the artists can exist in their countries. This allows a person like me, a Portuguese woman, to be in Portugal. It's like another view of art.

What can you tell me about your childhood that has been important in your work?

My childhood was very normal, like all children. What I did that was different was karate for many years. It taught me to be very demanding, to achieve a level of results; it has to do with doing one thing from beginning to end. High competition workouts are very demanding. If we apply this to art, I would say that when I face a challenge or an order, I feel as if I were in a championship, I have to train to get a result. I could have made a career in karate, but there was a time when I wanted to go to art school, and I did both activities together. But after a week in Arco, I went for training session and broke my knee. That was when I understood that I could not continue in karate but that I could use all this training as an artist. 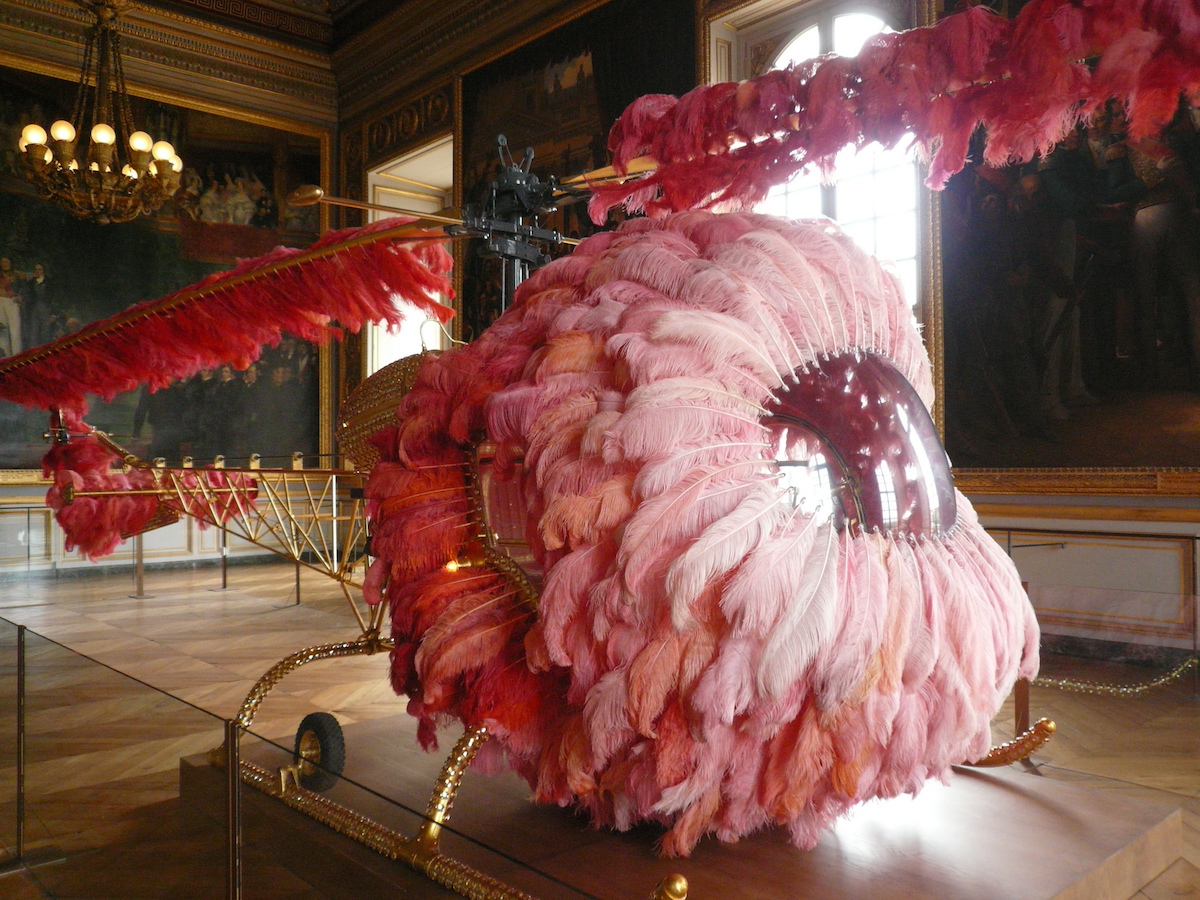 You are an artist committed to human rights and, in particular, the role of women in our society. What do you want to convey with your work, what dialogue are you seeking?

It depends on the work. I'm an artist, we do not think like men. I can be talking about the rights of women but also about beauty, the East, and the piece I did for Macao. It is another concept that has nothing to do with political things, it has to do more with the idea of beauty, volume ... I can be talking about communication. Women are like that, they can do many things at the same time, men can not. Men have a more linear discourse, it is another way of thinking, neither better nor worse, just different. We are like that. It is no longer necessary to have a single discourse.

What has it meant for you to display in Versailles?

I can not answer without telling you two or three things. I am the result of a time, of identities, of a change in the way we look at the world. Versailles could not have happened without first doing ​​the Venice Biennale in 2005 with Rosa Martinez and Maria Corral, because they were in fact the first women at the Venice Biennale and both Spanish. I was the first woman in the Rosa Martinez exhibition and the world realized that I existed as an artist and I am very grateful. I was with Maria Corral in Venice and we said that there are people who are at historic moments and do not realise. This was my case in 2005. Then I did more things that led me to Versailles. In 2005 the world realized I existed but I had no works. Then I did a couple of exhibitions. One of them, in the Garage in Moscow, which was the first group contemporary art exhibition, and I was part of it. It was also a very important moment. Then I did another in the Palazzo Grassi in Venice and was there in front of all the big names: Struth, Jeff Koons, Murakami ... And again I had the chance, much younger and female, to be amidst a group of awesome people. Then I was invited to give an exhibition in Versailles. It would never have been possible if I had not done ​​these international exhibitions where your work is alongside all these great artists of the world, where you have a presence.

You engage in a dialogue between past and present. When do you think that the great change in art takes place?

You were asking me what Versailles meant for me. Versailles changed everything. The exhibition had 1,600,000 visitors. Why? First, I am Portuguese. Second, I do not have a large gallery. Third, I have no great curator behind me. Fourth, no one knows me. 1,600,000 visitors! Jeff Koons had 850,000, Murakami roughly the same and you wonder, why? The truth is that the impact is greater for a woman, and I am also European.

You are closer to our culture ...

It's a culture that I understand, that we share in Europe. I integrated my work, I didn’t confront it with the palace. There was a divine union between the work and the space.

The great beauty of Versailles. Where does beauty lie in art for you?

For me art has to be beautiful. I believe that beauty and art are synonymous. I do not think it resides, I believe it is.

That moment when subject and object are the same ...

Yes. I think very much about the time, the emotion, the intensity ... I believe very much in the truth, in the idea that there are no lies, that communication is direct and sincere. If you look at these pieces they are not hidden, they are not isolated from the visitor, they are here present. And then you have many laws of understanding, you can look for this or that, but the truth is that they are hidden behind a theory. Then you can generate your own, but you do not need theory to exist. Beauty does not need theory, beauty is.

The big question, what is the concept of art for Joana Vasconcelos?

I think that art is what we are describing. It is the ability to generate a dimension of beauty and new light, that is, to me it is more interesting to talk about works than artists because those who are artists are the ones who manage, through one or many works, it depends, to open a new way for beauty, for understanding the world and to have a new perspective on the world. Art is the need to represent ourselves in complete freedom, art is the ability to keep the world alive, to keep our construction as human beings alive. This is why 1,600,000 people visited my exhibition because I represented Europe in a natural way. And when you are in a crisis it is more important that the artist should be in your country and represent your culture because otherwise, as in the Palaeolithic, you do not know what happened to the tribe that did not do the drawing, you know about the one that did. I not only represent my country but also this idea of common culture that we create in Europe. 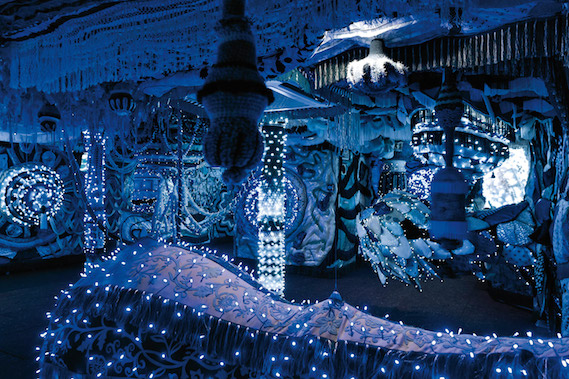 I remember our first meeting in Venice. The connection between Lisbon and Venice through a ferry turned into a work of art after being covered by its wool, fabrics and crochet and the famous Portuguese tiles was an amazing experience.

Yes, the boat was the most complex and difficult project I had ever done. It took us a year. We did not have much budget either and the truth is that my country helped me, companies and individuals sent me money and it ended up being a movement of support to get me to Venice. It is at times of crisis when people want to have a say, when they want to be represented and not lose their identity. It was a national project. I had to reflect what Lisbon is today, which elements are specific to our identity, like the tiles, what we have in common with Venice, like the boats, the river, the fact that we are two tourist cities, the fact that in the 15th century we were strongly connected. There is a historical connection but also a contemporary one. For me, the connection was the water, for Lisbon and Venice water has complete control over the city. Then I took the boat and we transformed it. It was an amazing life experience. It is possible to do everything you think. It was sincere because people realize and help you. We must continue representing ourselves in the world. I came to Venice because the Portuguese wanted to come and I'm very grateful. It was all tough, the transport, the opening ... but we managed.