Rarely have spectacles been the protagonists of an execution. But those of Khaled al Assad had seen too much. Worn for over four decades by the Head of Antiquities for the ancient city of Palmyra, they had overseen the care and upkeep of every pillar of the great colonnade and every sphinx at the temple of Bel. In the spring of 2015, Al Assad was living a peaceful life in retirement but still fully committed to 'his' ruins. At the beginning of the Syrian conflict, Palmyra had seemed safe behind combat lines. However, in May of that year, ISIS militants were drawing closer. While the entire city emptied of its inhabitants and its resident Syrian army fled,  the 82 year old Khaled al Assad came up with a plan. 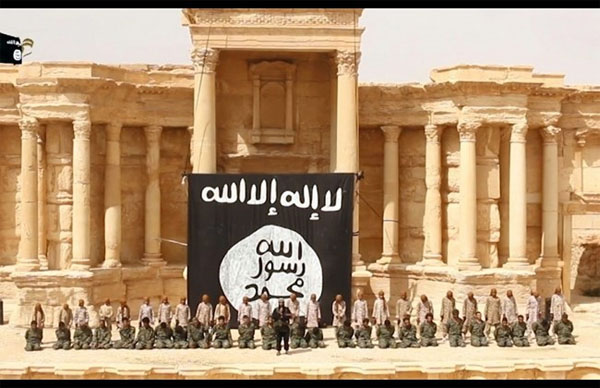 The execution of 25 Syrian soldiers by ISIS, Amphitheatre at Palmyra, July 2015

Palmyra after ISIS: The destruction of World Heritage sites and other forms of terror

Rarely have spectacles been the protagonists of an execution. But those of Khaled al Assad had seen too much. Worn for over four decades by the Head of Antiquities for the ancient city of Palmyra, they had overseen the care and upkeep of every pillar of the great colonnade and every sphinx at the temple of Bel.

In the spring of 2015, Al Assad was living a peaceful life in retirement but still fully committed to 'his' ruins. At the beginning of the Syrian conflict, Palmyra had seemed safe behind combat lines. However, in May of that year, ISIS militants were drawing closer. While the entire city emptied of its inhabitants and its resident Syrian army fled,  the 82 year old Khaled al Assad came up with a plan.  Mere hours before Jihadists entered the city, he summoned his son, Walid, and his son-in-law and together they selected 900 of Palmyra museum's most valuable pieces and organised their evacuation to Damascus by lorry. These are immediately followed behind by Walid and Assad's son-in-law, married to Assad's daughter whose birth coincided with the setting up of Palmyra's sentinel and who was named Xenobia after the Great Queen of the "pearl of the desert" herself.

The rest of the story is well-documented. Jihadists take the city, explosions are heard coming from beneath the temples of  Bel and Baalshamim as well as the Arch of Triumph and the funeral buildings are riddled with mines. Images flood the newsreels and internet.  Irina Bokova, Director-General of UNESCO, calls the events a war crime. With the amphitheatre behind them, 25 beaten and bloodied Syrian soldiers are shot at point-blank range by the 25 sons of Jihad fanatics standing behind them, the oldest of whom appeared to be around 12 years of age. The backdrop is a huge black Caliphate flag. ISIS mobs waste no time getting into the museum where, to their astonishment, they find the walls bare and the showcases and pedestals empty. All that is left is an elderly man, in his office, waiting patiently for them.  Al Assad is arrested and tortured daily for a month. On the 18th of August, his body appears in the city square, hung from a lampost by the wrists, a placard around his waist listing "the sins of he who directed the site of idols". At his feet is his severed head with the black-rimmed glasses put carefully back in place. The most macabre of images.

The Koran contains various verses dealing with decapitation: “When you encounter an infidel, direct your blows at his neck until death occurs." [47:4]. We are by now well familiar with the idea that for a Muslim this is the most humiliating way to die. Resurrection, or an afterlife, is not possible if the victim's head has been forcibly removed.

This brutal story is barely 2 years old yet only a week ago, the Director-General of the Ministry of Antiquities for Syria confirmed: “Since then, we have buried 15 civil servants here:  four were decapitated by ISIS and the rest were killed by either snipers or explosions." Extremist executioners are creating a new category of Syrian cultural heritage hero. 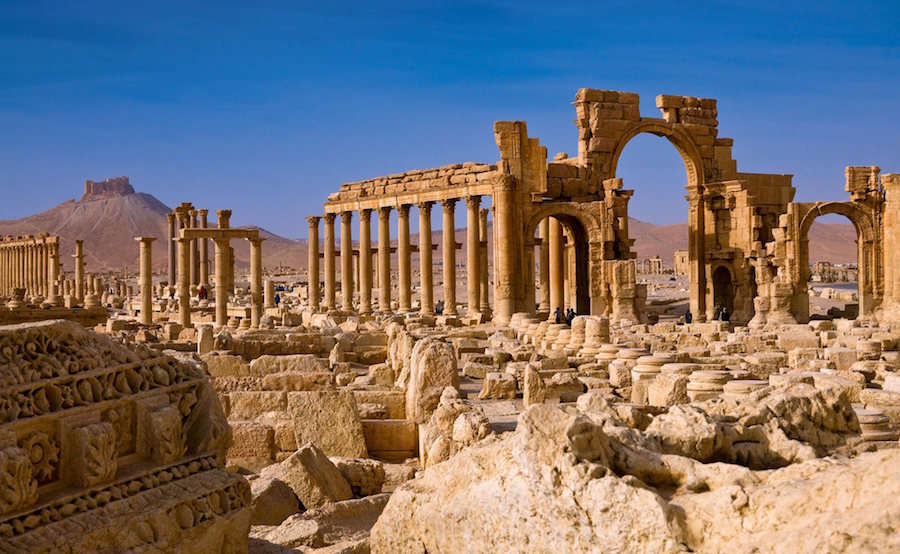 In a small Italian city

Recently, in the sleepy Italian city of  Aquilea 90 km east of Venice,  there was a notable little exhibition: Portraits of Palmyra in Aquilea that deserves mention. It was the first ever in Europe dedicated to the ancient Syrian site since its destruction. Some 30 sculptures, photographs and mosaics were on display with a view to  underlining and spreading the importance of a cultural heritage that is in danger. And all of it, from the inscription at the entrance to the walls painted the same shade of blue as Palmyra museum's, is in homage to Professor Al Assad. Aquilea, known as "the mother of Venice", could be said to have hosted, in its own right, an exhibition showcasing the 'Venice of the Desert'. Two cities, both declared World Heritage sites by UNESCO, who interact with each other despite geographical distances via these masterpieces of art. Perhaps this should be the mirror through which other projects or start-ups or groundswells should see themselves in a Europe that, for some time, has been losing and then refinding itself incessantly. Art as a unifying influence. Or a sticking plaster.

Resonating amongst the works on display at the exhibition could be heard two intersecting voices: that of Paul Veyne and the 127 pages of voyage into the past in his Palmyra: The Irreplaceable Treasure (Ed. Ariel, 2017) followed by the muted voice of Al Assad: “The oasis of Palmyra - he wrote - appears in the distance, protected on the west and north sides by a mountain range with Jebel Haian as its summit. In the east and south, the city opens out into infinity. A garden of half a million olive, palm and pomegranate trees surround the ruins like a crown of laurel leaves. Golden columns, tombs and, especially, the imposing mass of the sanctuary of Bel ..." This city, whose arquaeological richness is comparable only to that of Pompeii or Epheseus, was a settlement from 2000 BC onwards and a melting pot for many civilisations before being annexed to the Roman Empire in the 1st century AD. It later reached its maximum expansion during the reign of the great Queen Xenobia. Palmyra was the crossroads on the old Silk Route. In the second century AD, Aramaic and Greek were spoken by merchants, travelling or resident, as commerce thrived ~ the Romans bought incense, pepper, ivory pearls and silks from Persia, India and Arabia in exchange for wheat, wine and oil.  And it was certainly the case when examining the faces engraved on the tombs of Palmyra's most powerful families that there existed a certain analogy with other parts of the Roman Empire, as well as shades of the Oriental.  A modernity similar to the eclecticism we see today on any Manhatten or Barcelona street, the one Veyne called "faces of the citizens of the world". 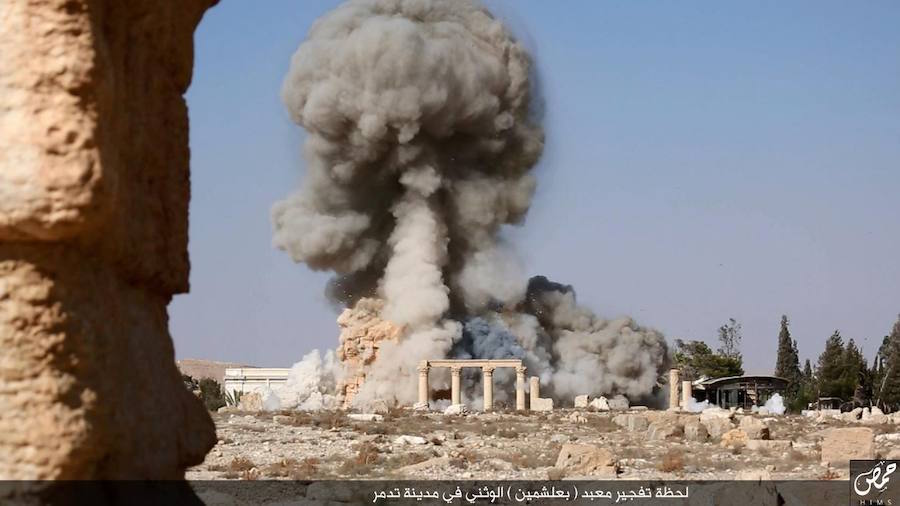 Palmyra, that fertile queen of the desert, represents everything the fanatics hate: openness, cultural interchange, the notion of a patrimony for all humankind ... With its eternal beauty, it challenged the dark ages of brutality and ignorance. It was in the hands of ISIS between May 2015 and March 2016. The Spanish artist Goya had already painted the destruction of art in a series drawing from 1814. Captioned "He knows not what he does", it shows an absurd-looking, bare-chested man, arrogant, his eyes closed, brick hammer in hand. He has just smashed a statue to pieces. It could be a contemporary image. Although iconoclasm has always existed, from Byzantium to the Reformation, from the Russian Revolution to Nazi Entartete Kunst 'degenerate art', we are nevertheless now witnessing a new type of terrorism. Jihad by media. The Taliban produced images whose global impact had been exceeded only by footage of planes hitting the Twin Towers. Since then, there has been no let-up in the internet spread of Islamic propoganda which goes to show just how difficult it is to control what is posted and the impact of electronic images such as the destruction of ancient manuscripts in Mali, heritage sites in  Jorsabad, the Great Mosque Of Damascus and the Krak des Chevaliers in Syria, not to mention the van attack on the Ramblas in Barcelona and the threats concerning the Sagrada Familia cathedral there. Some days ago, leaders from the UK, France and Italy spearheaded a proposal that internet giants remove extremist ISIS content in less than 2 hours.  Urgent measures are required. As Veyne so rightly said: "To know only one culture, one's own, means condemning oneself to living just one life, isolated form the world that surrounds us."