The international contemporary art fair, ArcoMadrid, will open its doors on February 25th, in association with Colombia, as an invited nation.

The Fernando Botero (Medellín, Colombia - 1932) art collection is one of the 50 most important museum collections in the world.  As a palette, paint, and brush artist, his hands have never stopped working.  His figurative art draws out the form and essence of his subjects, provoking a higher sense of sensuality, flexibility and grandeur. Reality is transformed through his imagination: sometimes into kindness, other times into scathing violence.  The sculptures, paintings and drawings have created a relevant artistic production, whose objective is “to create a formal opulence.”  These powerful figures, whether in marble or bronze, have been on exhibition in the most important venues in the world, such as: The Champs Elysees in Paris, Park Avenue in New York, The Grand Canal in Venice, and The Paseo de Recoletos in Madrid. 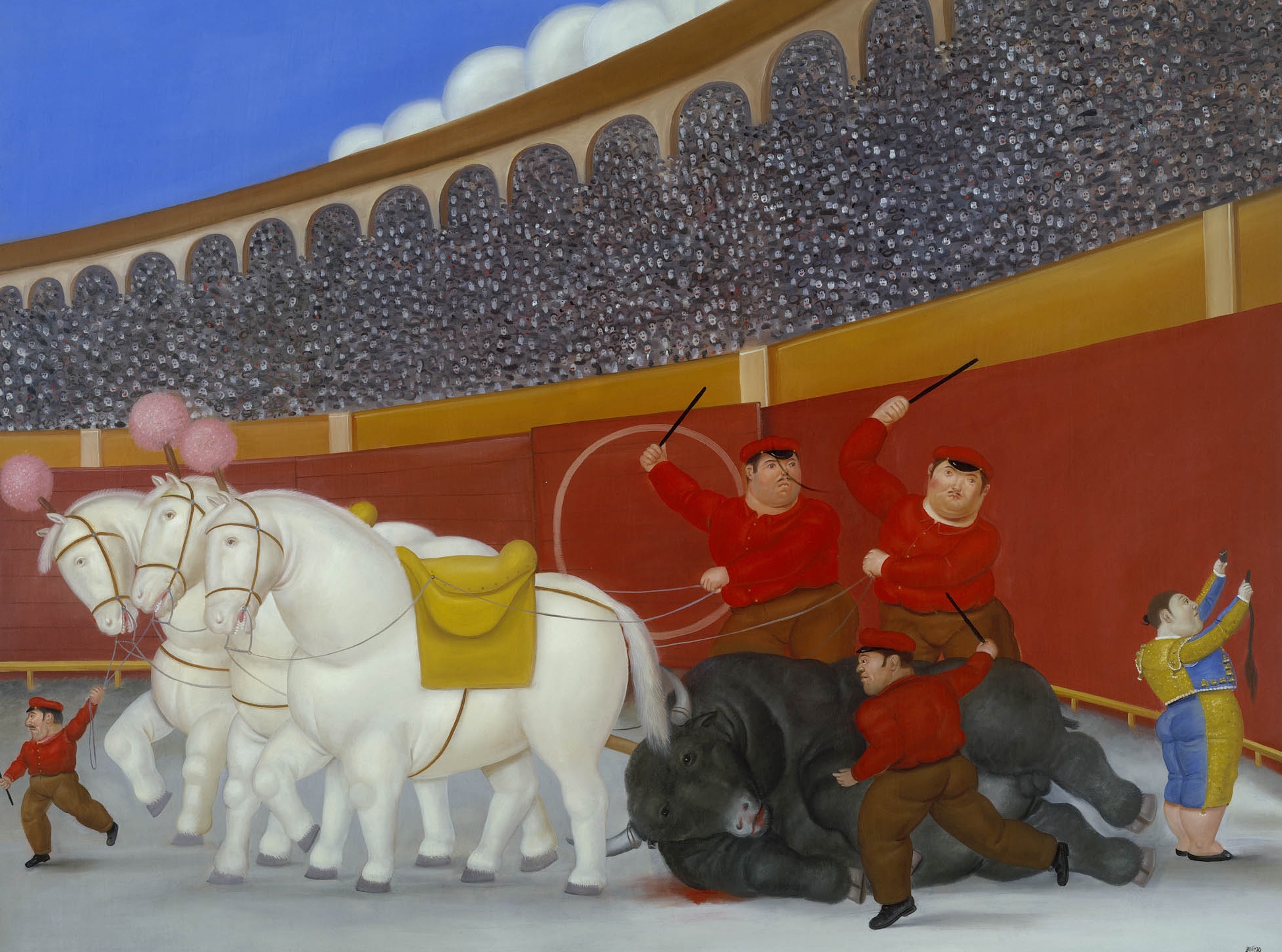 The still-lifes, the bull fighting, the circus, the religion and the eroticism make up an extensive theme rooted in Latin America — specifically in his native country — with a manifest skill in drawing and color.  The beautiful and the violent combine together in the Boterian imagery that brings us closer to Colombia’ssoul through a nostalgic reminiscence. 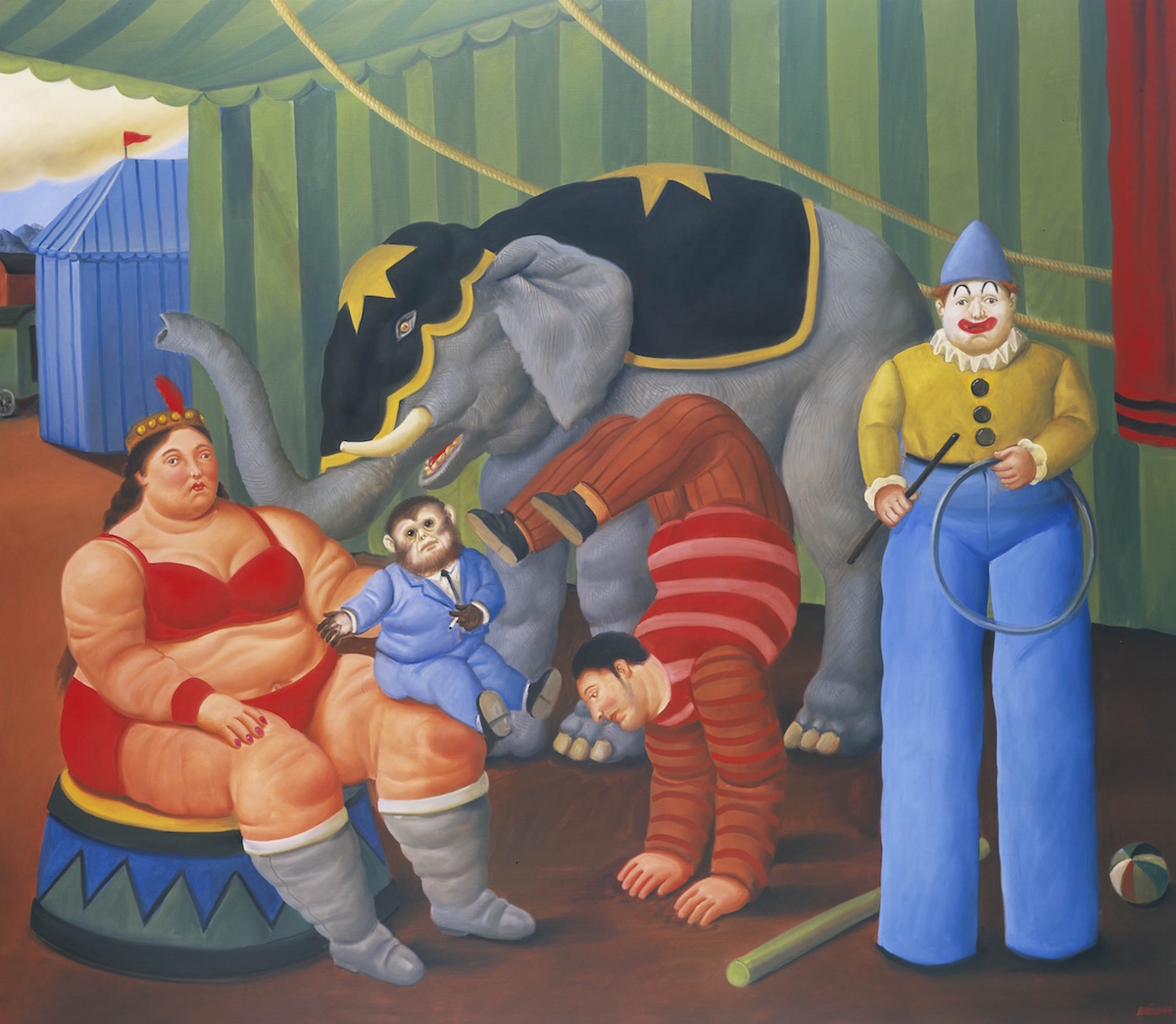 Through his studies in Montecarlo, with views of the Mediterranean sea and his characteristic lighting, we can draw closer to the soul of this magnificent artist.

Elena Cué: His knowledge about art history is plentiful and has unquestionably influenced his art work.  Do you believe that an artist can be complete without being influenced by culture?

Fernando Botero: A great artist is born from a profound knowledge of the tradition and problems of painting.  However, there are many works in which freshness and audacity surprise, as can be seen in popular art and in certain examples of modern art.

E.C: You have said that “art is a permanent accusation.” Do you believe an artist has a moral duty to use his work to point out and denounce injustices in this devastating world?

F.B: The only duty an artist has is in the quality of the art.  There is no moral obligation to denounce. An artist confronted with a tremendous injustice sometimes feels inclined to say something. Denouncing the situation is the artist’s choice. 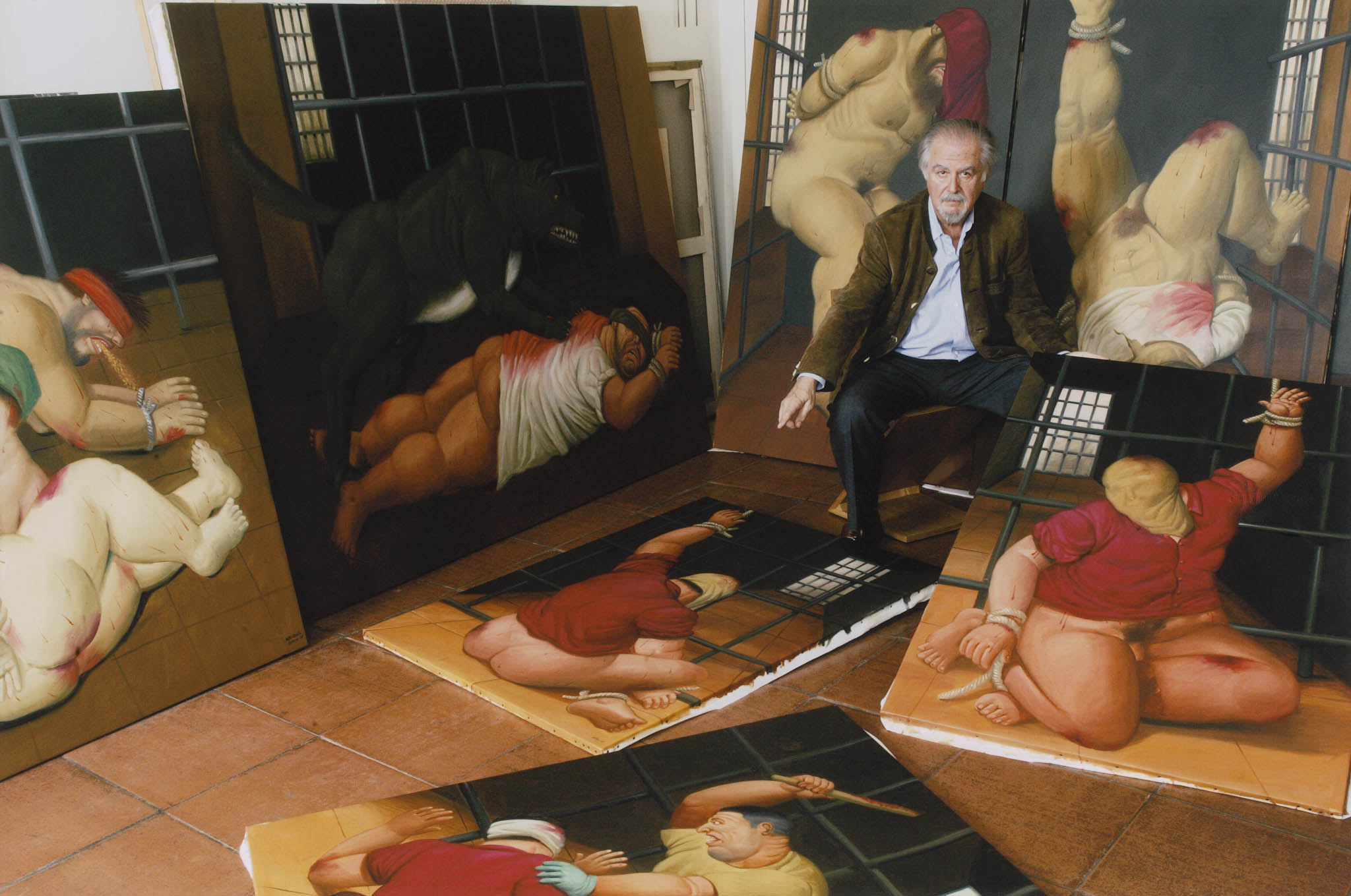 E.C: Goya’s influence in your paintings is evident. The series of engravings, “Casualties of War” ("Los desastres de la guerra") totally reveals a dramatic cruelty and barbaric humanity. Your work includes a series about the crimes that occurred in the Iraqi jail of Abu Ghraib after the United States attacks in 2001.  In this world of cyber-technology, events are ephemeral, since the new always replaces the old, in contrast to art which is powerful and timeless, making it more applicable. Why did you choose this precise series of crimes?

F.B: I did not choose this series of crimes, it was impossible to ignore them: just like Iraqi prisoners being tortured by Americans, in the Abu Ghraib jail - the same place where Sadam Hussein was tortured. Or, the violence in Colombia which left thousands of victims, on both sides, and displaced people, and since this happened in my country, it was especially painful for me.

E.C: Goya already stated that illustration didn't make barbarism disappear. Do you believe there is hope in this respect?

F.B:  It is not possible for art to resolve situations which are basically political.  The artist shows the situation that exists like a “permanent denunciation.”  Nobody would recall the small village, Guernica, which was bombed, if it were not for Picasso. 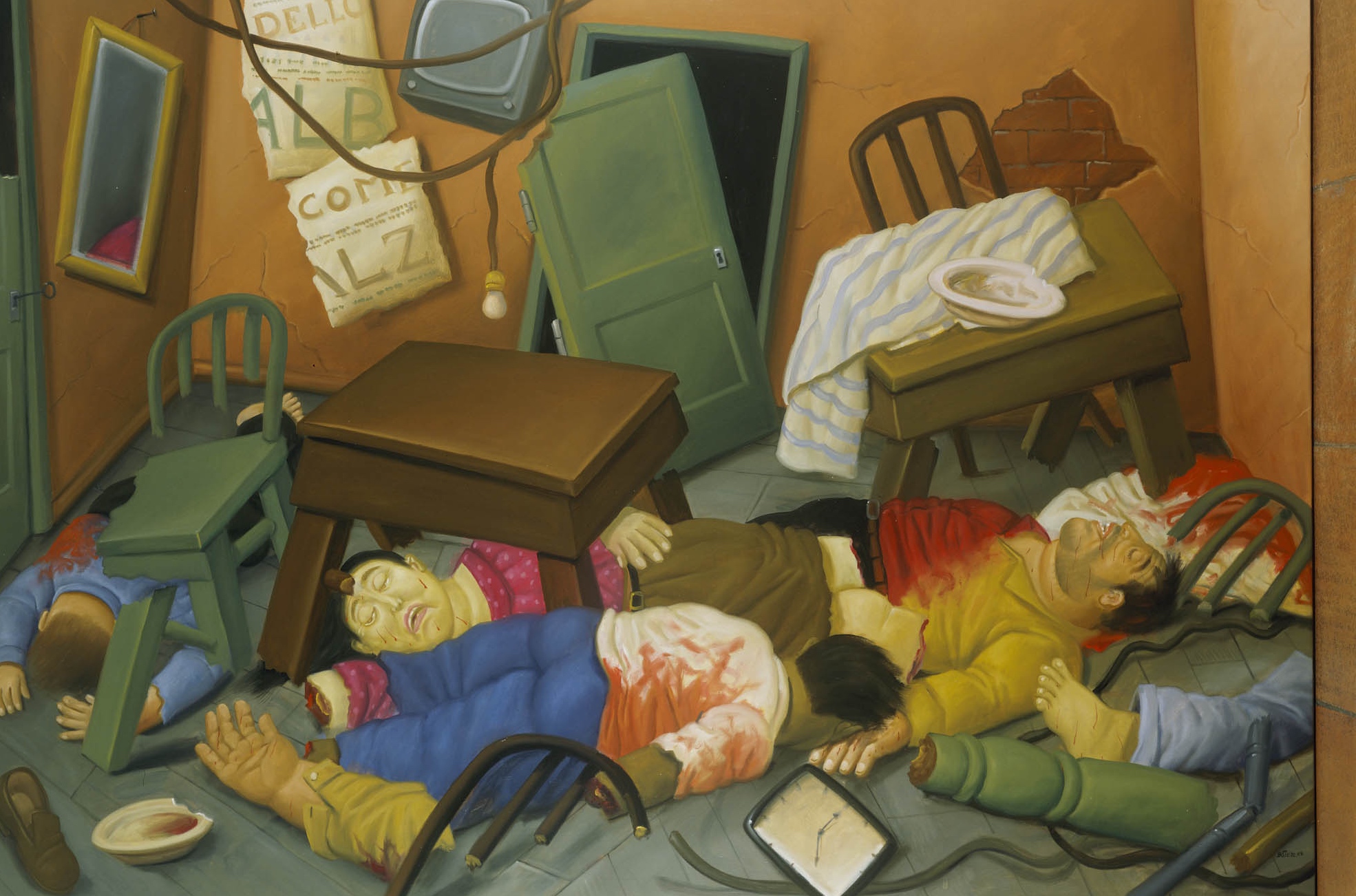 E.C: Wisdom comes from a long life.  What do you believe is the meaning of life?

F.B: The meaning of life is different for everyone. Some take on a hedonist attitude.  For others, there is a necessity for spiritual or cultural fulfillment based on discipline.

E.C: You have already embraced the life of an artist in every possible way, in all of its complexities. What counsel would you give the younger generations of artists?

F.B: An artist is born like a priest is born.  If they are born an artist, I would tell them art is not a game, it is something very serious which completely requires everything you have to give.

E.C:  With an aesthetic technique as identifiable as yours, in which reality is expressed through a volumetric sensuality, what opinion do you have of the English artist, Beryl Cook, whose work reflects a seemingly jovial nature with an aesthetic sense very similar to yours?

F.B: This is the first time I have heard of Beryl Cook. 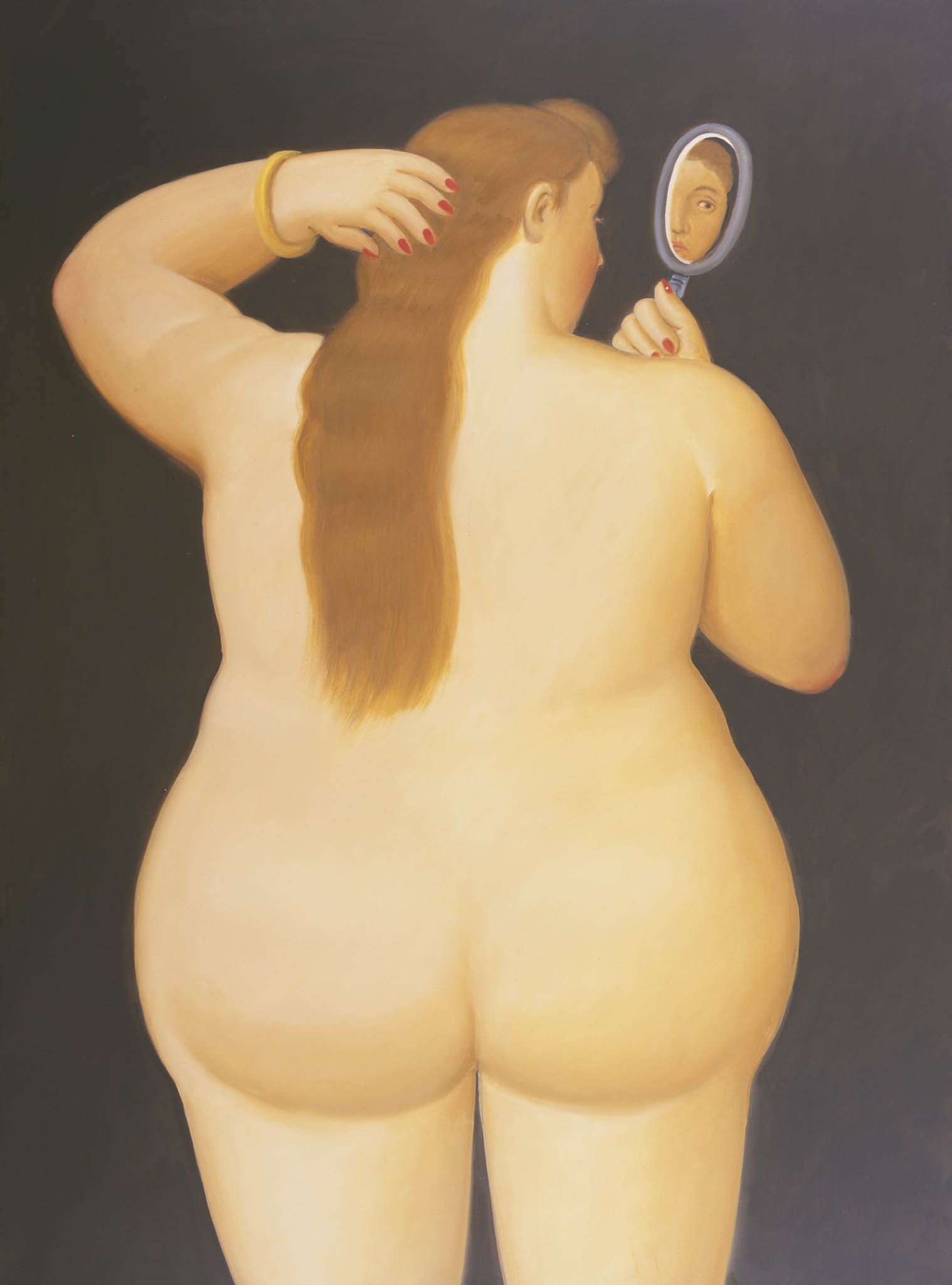 E.C: Your artistic production has beentypecast as “Magic Realism” determined by the importance of the myths in Latin-America, as well as the “New Figurative”artcharacterized by a return to the informal methods of figurative painting.  Do you agree with this description?

F.B: Magic Realism, definitely not, because in my works nothing is magic.  I paint about things which are unlikely but not impossible.  In my pieces, nobody flies and nothing impossible happens.

Art is always an exaggeration in some sense; in color, in form, even in theme, etc… but it has always been this way. It is the same with the nature of some works by Giotto or Massacio, or the color of life as expressed by Van Gogh.

It could be a new figurative work.  It is probable because we have inherited the liberty from abstract art, and we have a liberty in terms of shapes. Color and space involves thinking, not realism.

E.C: What literature works have influenced and helped in the type of works you paint?

F.B: I do not believe that other arts can influence painting - sometimes a vulgar image or a piece of popular art have more affect in the sensitivity of the painter than a masterpiece of literature. Since the very beginning I intuitively had an interest in exaggerating sizes. 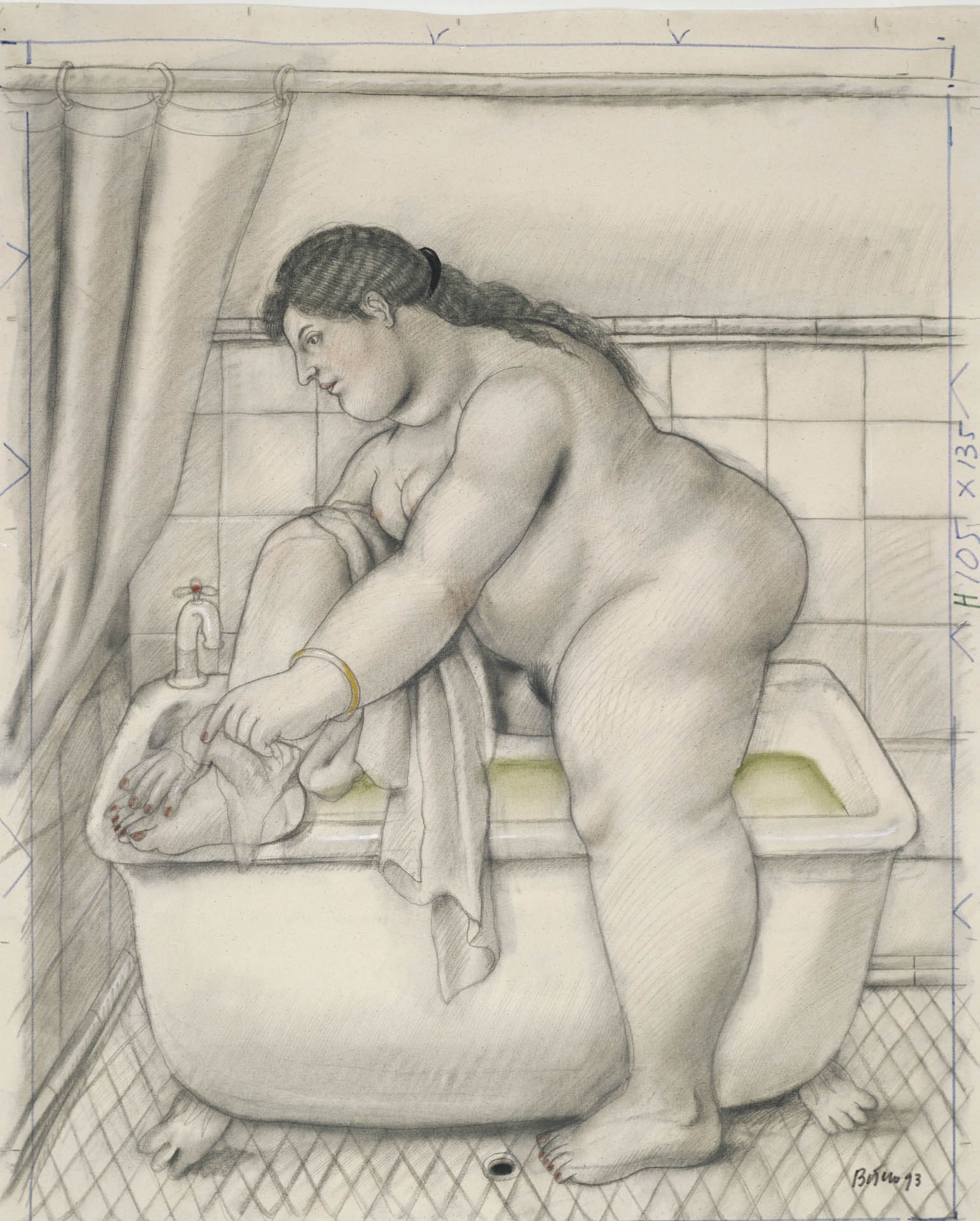 E.C: What importance does sketching have in your painting?

F.B: It is of utmost importance. Sketching is almost everything. It is the painter’s identity, his style, his conviction, and then color is just a gift to the drawing.

E.C: The generous donation of more than 200 works from your own collection to the Botero Museum in Bogotá, and almost 20 others to the Antioquía Museum in Medellín is exemplary.

What have your motivation and satisfaction been in this respect?

F.B: The donation I made to Columbia from my collection, and from many of my works, is one of the best ideas I ever had in my life.  The public’s enjoyment is the best reward. 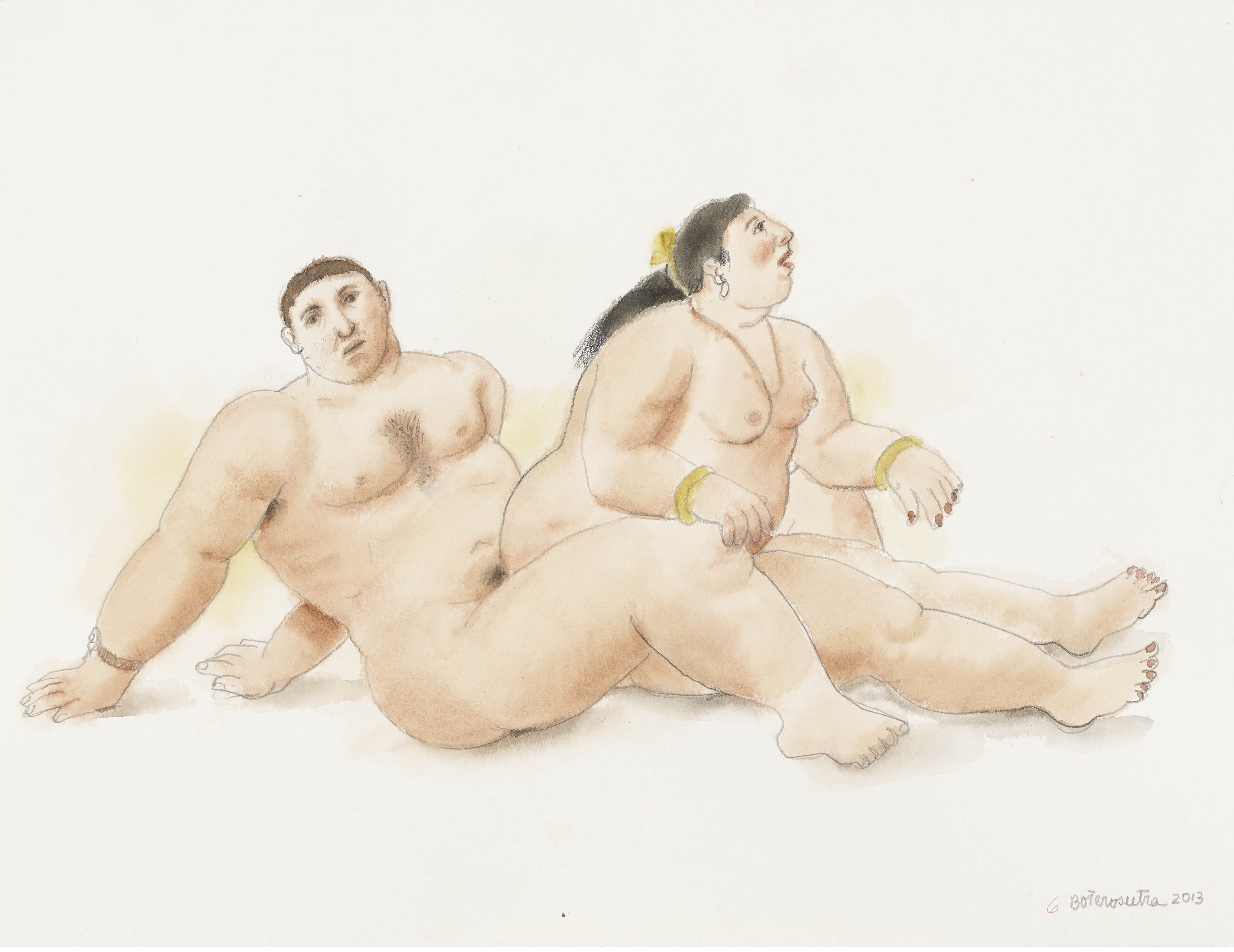 E.C: The millennial Hindu book, Kama Sutra, about the art of love in its spiritual and sexual fullness is reinvented by your imagination in Boterosutra. Which artists, from your point of view, have the best ability to represent love?

F.B: Eroticism has made great plastic manifestation all over the Orient, in Persia, Japan, India, etc. I did my Boterosutra series using more imagination than memory, trying as always to make the artistic expression more important than the theme - the rhythm of drawing, the subtle modeling, the application of color were the dominant elements in this series.  The theme is extraordinary and unique because only in loving the human body can you make postures which could only be repeated in the circus.

E.C: Nietzsche, in The Birth of a Tragedy, writes “it is only as an aesthetic phenomenon that existence and the world are eternally justified.”  Is the art, as stated by Nietzsche, the metaphysical activity of life?  For an artist like you, would this metaphysics be the only way we can make our avatars existence tolerable?

F.B: I have never read Nietzsche, but I do believe that the artist presents a world as the metaphysics of art.  The artist presents, through his work in general, a more beautiful loving world that makes the “avatars of our existence,” as you said, more tolerable.

E.C: The study of the relationship of an artist’s biography and work has been a constant throughout the history of art.  The Colombian history, social and political reality are expressed through your career.  How do you see your country evolving right now?  What vision do you have for spreading your national cultural identity?

F.B: The work of an artist, in its totality, is like a self portrait – in my country, in between great dramas, there has been an economic evolution and culturally positive advancements. I believe in the importance of the roots in an artist’s work.  That ‘something’ that comes from the motherland is what gives works their touch of honesty.

E.C: What have been the most important moments of your life?

F.B: The most important moments of my life have always been connected to my work.  They were moments in which I felt I accomplished something unexpected.