Painting As A Reflection Of Passions 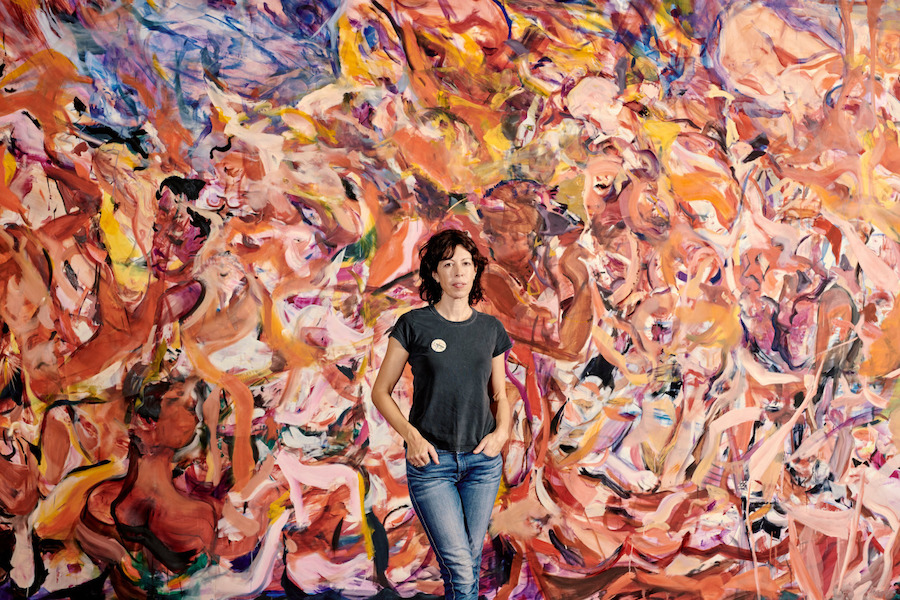 Observar To contemplate a painting by Cecily Brown is to experience something vital, especially as regards the massive canvasses she churned out feverishly during the early years. Their surfaces manifest an intense vacuous horror, where a profusion of colours and brushstrokes reveal bodies twisted in passion or revulsion, fairytale characters, nudes, fruits, trees or, even, just lines of expression and vibrant colours that are a masterclass in composition. Although the influence of her friend and mentor Francis Bacon is evident in all her works (along with that of the classical and neoclassical masters), Brown still manages to escape the precarious stereotype of "women’s art" and forge her way into the field of 20th and 21st century abstractionism with a powerful sexuality and uncommon violence. Today, after struggling to make a name for herself on the New York art scene whilst working as a waitress, she is considered one of the key figures in contemporary painting. Her work expresses talent, energy and intellectual power, drawing the viewer into a complex web of brushwork, colours and intermingled shapes where each stroke has its place. 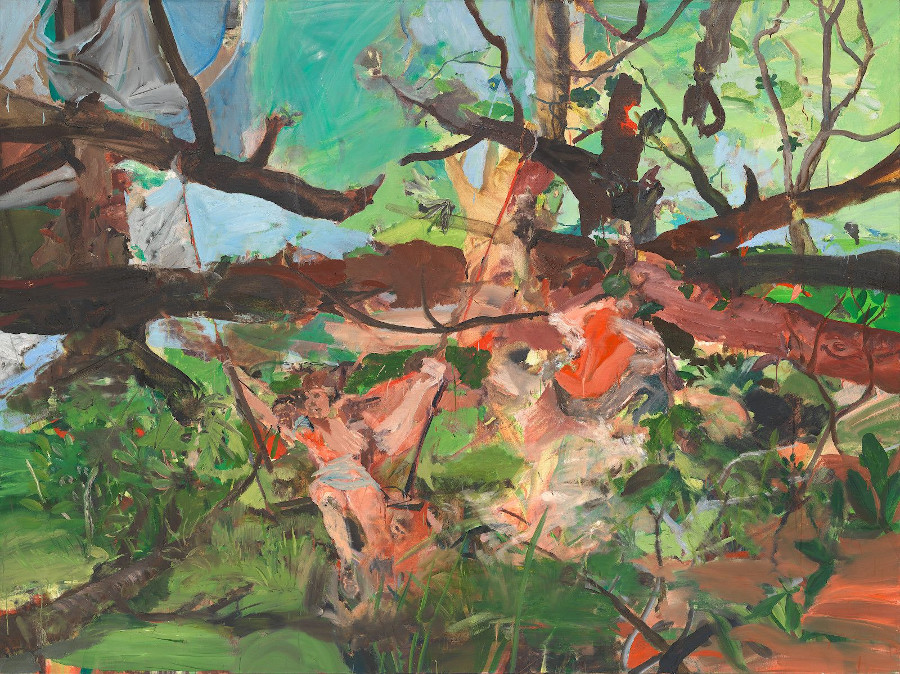 A childhood impacted by art (and Francis Bacon) 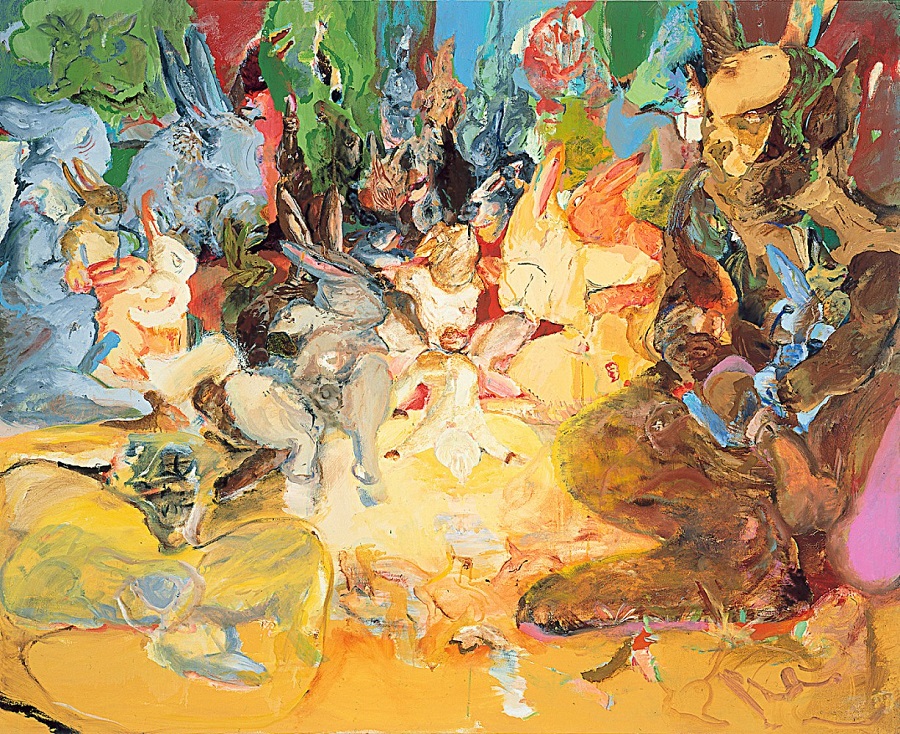 Cecily Brown was born in Surrey, England in 1969 to a novelist mother and an art critic and curator father. She lived a bohemian childhood submerged in art, intellectualism and creative freedom - a family environment that would have a decisive influence on her future artistic vocation. In her own words, she decided to become an artist at the age of three, something that probably had not a little to do with her early contact with the British painter and draughtsman Francis Bacon, one of the most important figures in modern art and one whose paintings are among the most sought-after today. Bacon and Brown’s bonds of friendship would be maintained over time and exert a clear and profound influence on her own art. Likewise, the decisive impact of her mother’s creativity, work ethic and energy would also play a key part in the development of Brown’s personality, budding creative talent and work.

Adolescence and young adulthood in London – the difficult years 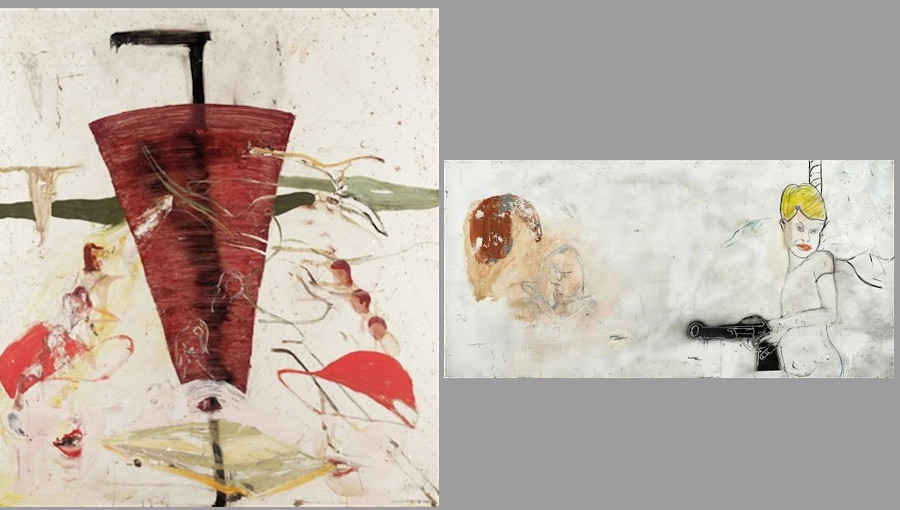 At age 16, Brown left mainstream school to focus on a future in art. After two years at the Surrey School of Art and Design, she moved to London and studied drawing and engraving, as well as training under the tutelage of the painter Maggi Hambling. During that time and in order to survive in the big city, she worked as a cleaner - something she would continue to do until achieving definitive recognition. Paradoxically, her friendship with Francis Bacon continued and deepened due to their mutual fondness for visiting local art exhibitions. In 1993, Brown graduated with honours from the Slade School of Fine Art and won First Prize in the National Competition for British Art Students. Embracing the influence of Bacon's pictorial imaginary, she distanced herself from the London art scene of the 90s - a world of installations, large-scale or site-specific works and multimedia creations, among other contemporary disciplines. This commitment to a traditional style of painting would prevent her from making a name for herself in what was the capital’s highly dynamic art scene.

Fleeing to New York and the first signs of success 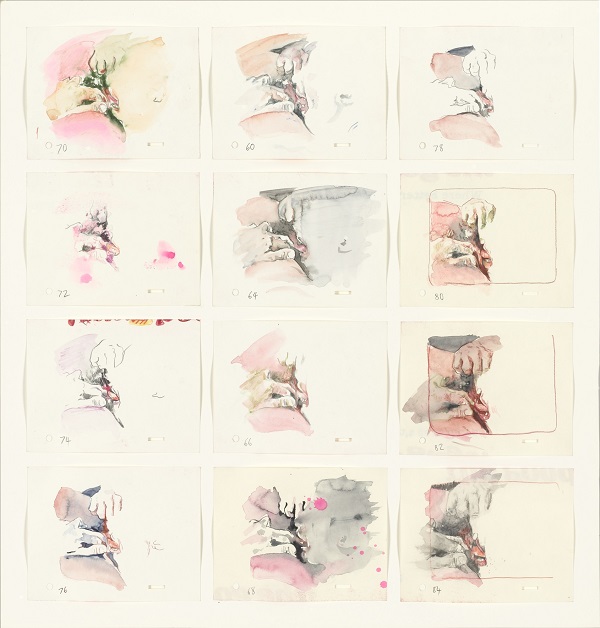 Tired of achieving no recognition in London, Brown moved to New York in search of new horizons. In 1995, she arrived in the city whose sights and lights had dazzled her on a previous trip and decided to move away from painting in order to explore other formats. This was when she created “Four Letter Heaven”, an animated short with erotic overtones using mixed media, which went on to win an award at the Telluride Festival. At that time, a still young Brown was working as a waitress and suffering severe economic hardship. She went back to working on canvas, painting in a compulsive and feverish way in her Manhattan studio and it was then that she began to create her emblematic large-scale works: paintings in which brushstroke and colour generate scenes of chaos, midway between abstraction and figuration and in which violence and sex always make an appearance. 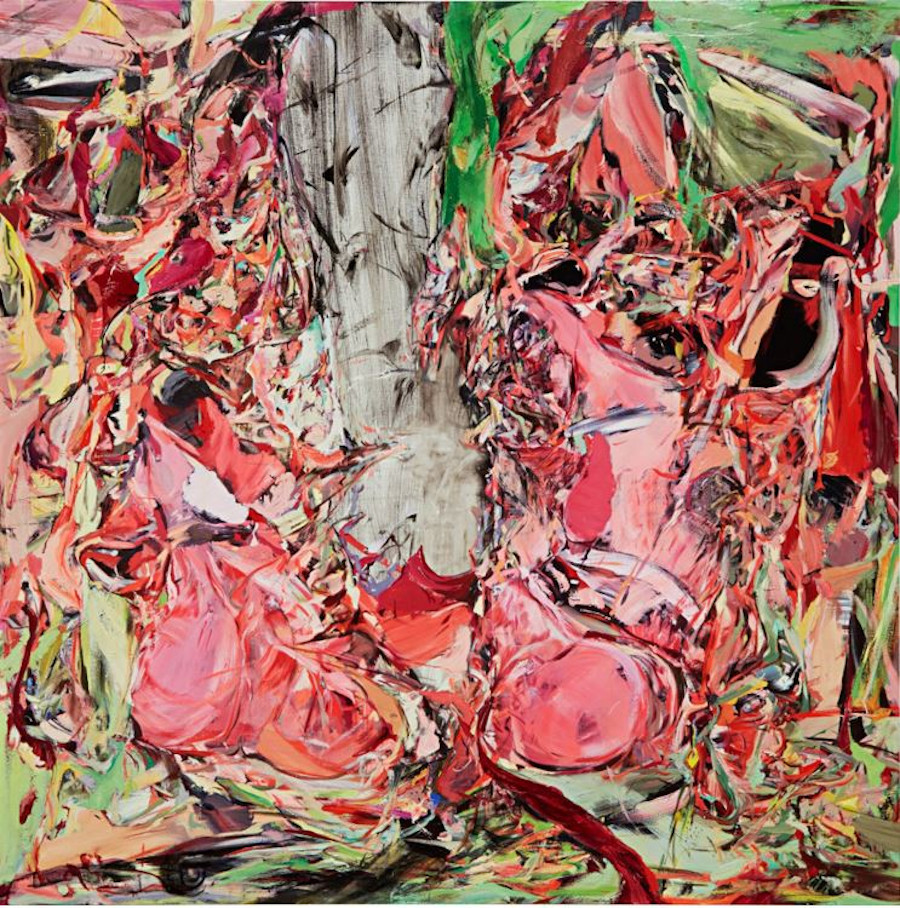 From the moment of her solo exhibition organised by the Deitch Projects gallery in 1997, Brown's rise on the New York art scene was unstoppable, with exhibitions of her work continuing throughout the decade and receiving total acceptance from critics and the public alike. Aged just 29, one of the world’s most prestigious art galleries, the Gagosian in New York, decided to represent her and include her work in its catalogue. She continued to paint almost obsessively in the new studio she shared with Sean Landers, a fellow painter and her partner at the time. Success, however, did not bring her any sense of satisfaction and those days and years would become one long and intense succession of parties, alcohol, boyfriends and art. In later years, Brown would admit that she felt "forced" to play the role of "tormented genius", leading a lifestyle according to what seemed to be demanded then on New York’s art scene.

“life, death and the kitchen sink” 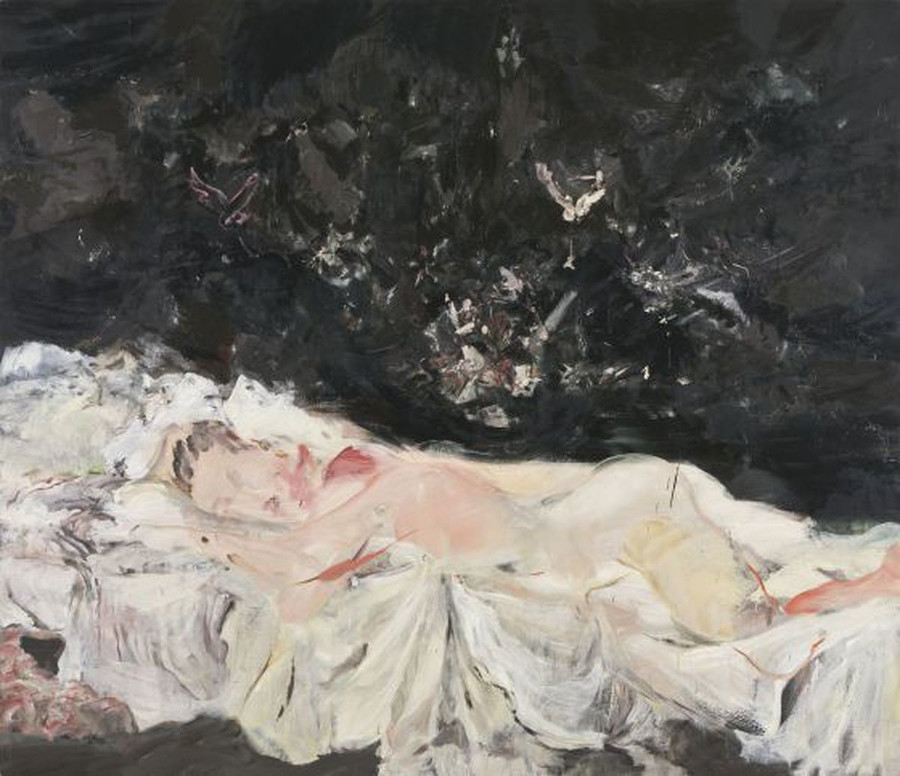 Brown has never hidden her admiration for classical masters and the avant-garde. From Goya to the American abstract expressionist Willem de Kooning, her canvases reflect clear influences from previous artistic schools: Goya's Black Paintings and Kooning's Monsters, among others. Brown’s series of Black Paintings took their inspiration and made it her own, with powerful brushstrokes, chaos and an intense, disturbing sexuality as new additions. 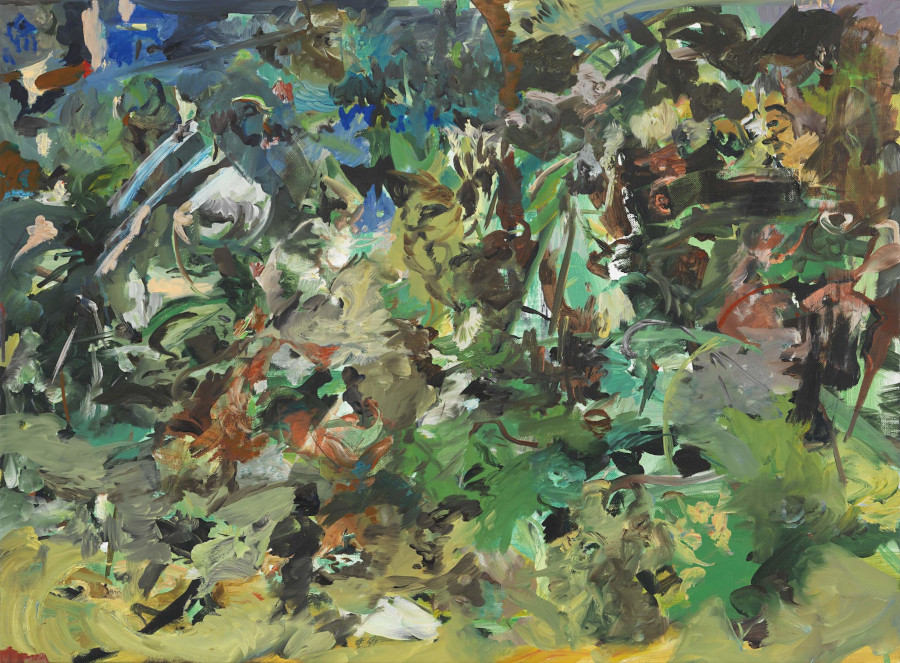 While Brown has retained her style and creative identity over the decades, it is clear that in recent years her art has undergone an interesting evolution. After her 15-year collaboration with the Gagosian Gallery ended, her paintings began to take on a smaller size and an obvious change in themes - canvases where violence, chaos and human sexuality seemed to burst onto the canvas through colour and where gesture made way for less powerful themes. As Brown recently remarked, "What interests me now is life, death and the kitchen sink." In addition to working on canvas or panel, Brown has also created installations for multiple art spaces and has collaborated on the creation of murals.

Creation of a mural in Buffalo (USA) by the city's community of artists and art students, in collaboration with Cecily Brown

Brown has seen her work exhibited in some of the most important museums and galleries in the world. In 2014, the Gagosian Gallery organized a large exhibition of her work so far that decade. Her work has also been recognized in multiple exhibitions and retrospectives, such as those held by the MACRO in Rome (2003) and the Queen Sofía National Museum of Art in Madrid (2004). Below are highlighted some of the most recent exhibitions of her work around the world.

In New York, THE DRAWING CENTER is one of SoHo’s benchmark art institutions. 2016 saw its first ever Cecily Brown retrospective exhibition, with eighty drawings and sketches accompanied by several works in mixed media showcasing the relationship between both disciplines.

Brown was the first person to feature in a major monographic exhibition here with works from her New York period, at the request of Blenheim Palace. In the video, Brown explains how her creative process works and how the Palace environment was an inspiration.

Cecily Brown: The Sleep Around and the Lost and Found. Terry R. Myers. 2016

This catalogue features all of the works brought together for the exhibition of the same title, organized by the Berlin Centre for Contemporary Art in 2015. Its pages gleam with large full-page colour reproductions and also showcases the installation that the artist created for the occasion. The pictures are accompanied by an exhaustive essay on Brown's work, written by art critic, professor and curator Terry R. Myers.

The violence that is so commonly depicted in Brown's painting by means of the human body shifts here to instead be portrayed through shipwreck imagery. Rather than painting on canvas, she chooses drawings to capture intense scenes of nautical disasters, by dint of which she highlights the tensions between the past and the present. In these charcoal, pastel, watercolour and ink drawings, she is clearly inspired by the work of Delacroix and, more so, by Géricault's well-known “The Raft of the Medusa”.