Guerrilla Girls are a collective of anonymous artists who emerged during the 1980s in the United States with the aim of protesting the sexism suffered by women in the art world. Their first appearance dates back to 1985 when they demonstrated outside the Museum of Modern Art in New York to highlight the scant female representation in the gallery’s contemporary art exhibition, ‘An Internacional Survey of Painting and Sculpture’. Of the 169 artists who participated, only 13 of them were women. 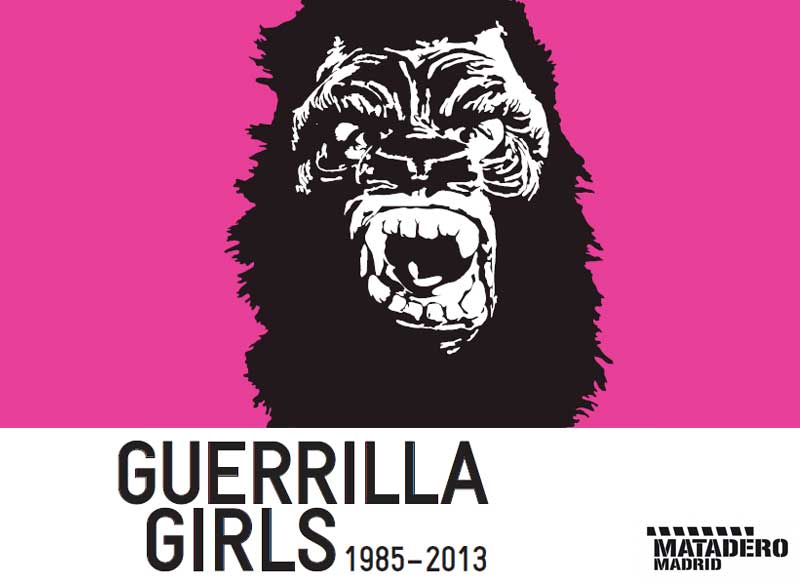 Pavilion 16 of the former slaughterhouse ‘MATADERO’ in Madrid, now converted into a complex of spaces for contemporary art, ran an exhibition from January to April 2015 showcasing  the work of Guerrilla Girls, a feminist art collective, and commemorating all thirty years of their activist output so far.

Guerrilla Girls are a collective of anonymous artists who emerged during the 1980s in the United States with the aim of protesting the sexism suffered by women in the art world. Their first appearance dates back to 1985 when they demonstrated outside the Museum of Modern Art in New York to highlight the scant female representation in the gallery’s contemporary art exhibition, ‘An Internacional Survey of Painting and Sculpture’. Of the 169 artists who participated, only 13 of them were women. Since then, they have not stoppedin their denouncements of the systematic lack of recognition faced by the female sex, not only in the artistic but also in business and political spheres.  They reclaim the conspicuousness by their absence of women in the art world and condemn the lack of support from public institutions for their work as well as the widespread invisibility in the cultural and social spheres. They seek not only equal rights but equal opportunities in a world where men set the rules of the game. They want an "I" beyond the dichotomy of sex and gender. Biological sex has become a social genre that discriminates against and relegates women.

Possibly what stands out most about the Guerrilla Girls’ retrospective is how it raises  awareness that feminism, as a protest movement for liberation, has ceased to be present in today's public discourse, as compared to the interest it sparked in the 1980’s when it became visible not only on the streets but also in academia with the emergence of the first Women's Studies courses at universities in Britain, France, Italy and the United States. Its presentation now in Madrid’s artistic circles, and previously in Bilbao, constitutes a great opportunity to reflect on those certainties that have accompanied those great stories in art history (invariably written by men) and the possibility of returning to them with a greater capacity for analysis and having a better interpretation of "woman” as a social subject at our disposal. 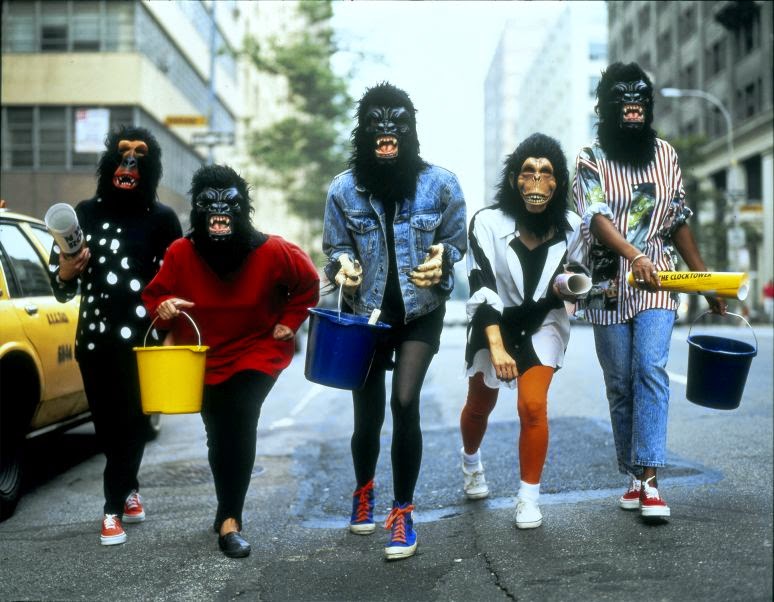 The gorilla masks they wear in public are the identity marker of a group who seek anonymity for their members and use, instead of their real names, those of illustrious women who have disappeared into oblivion. All we know is that their aliases are those of female artists or those linked to the art world. Their image serves as a vehicle for their own particular discourse, becoming the subject and object of their protests. Sexual discrimination, the shortsightedness of the artistic world, the paradox of believing that art is at the forefront of the societal avant-garde, the use of statistics as scientific findings and wake-up calls alerting us to other marginalized groups are just some of their battle cries.

The Guerrilla Girls’ most representative work is their posters, of multiple sizes, and varied designs, full of ironic messages that bring a smile to the visitor’s face and often also a reflection on the power of the written word in the age of the image and an opportunity to free it from its normative chains. Interestingly, as I have already pointed out, statistics are one of the weapons this group uses to emphasize its exposes on a recurring basis. An example of this is a 1985 poster with the following caption, “These galleries show no more than 10% women artists or none at all.” And another from 1989, “Do women have to be naked to get into the Met Museum? Less than 4% of the artists in the Modern Art sections are women, but, 76% of the nudes are female.” The poster is an easy way of attracting the visitors’ attention and, in order to do this, the activists seek to mazimize their voices by positioning their messages in the most conspicuous places in museums and art galleries. Participation in forums, publishing books, magazines and documentaries, giving interviews and seeking out followers for the cause are other forms of activism. The collective no longer has room for any more members but it does encourage us to support their demands from wherever we may be.

Xabier Arakistain, curator of the exhibition and a great connoisseur of women's issues, has brought together practically all of the group's work since their formation and invites the viewer, in date order, to understand these women’s processes of creation and their forms of protest. Their message has been disseminated across the world and it is possible that their ironic and humoristic oeuvre of complaint, accusation and social criticism will serve to sensitize the public and change their perception of women in the arts.