Classified as a UNESCO World Heritage Site since 1987, Venice now finds itself at death's door, not drowning in the Adriatic's high tides but suffocated by mass tourism. UNESCO has extended until December 2018 its deadline for Venice to meet twelve criteria, to the letter, that might spare it being added to the World Heritage in Danger List alongside Aleppo, Damascus and the historic centre of Vienna. Around 9.30 in the morning, crossing the Campo Santa Maria Formosa towards San Zaccaria, there is still a real feel of authentic Vienna with children on their way to school, kiosks piled high with bundles of Corriere della Sera and Il Gazzettino and the local dialect of young Venetians stepping off gondolas and vaporettos en route to the Plaza's fresh vegetable stalls piled high with basil, chicory, vine tomatoes and aubergines. 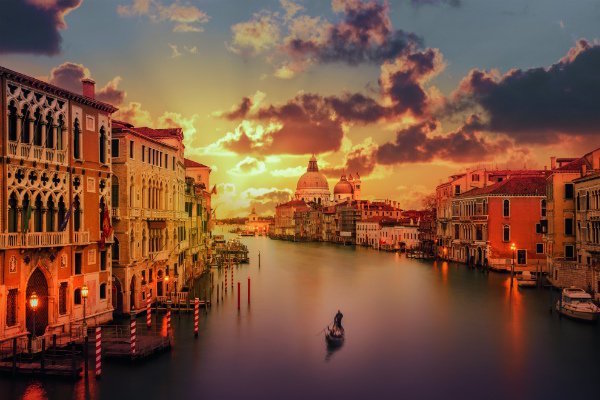 Classified as a UNESCO World Heritage Site since 1987, Venice now finds itself at death's door, not drowning in the Adriatic's high tides but suffocated by mass tourism. UNESCO has extended until December 2018 its deadline for Venice to meet twelve criteria, to the letter, that might spare it being added to the World Heritage in Danger List alongside Aleppo, Damascus and the historic centre of Vienna.

Around 9.30 in the morning, crossing the Campo Santa Maria Formosa towards San Zaccaria, there is still a real feel of authentic Vienna with children on their way to school, kiosks piled high with bundles of Corriere della Sera and Il Gazzettino and the local dialect of young Venetians stepping off gondolas and vaporettos en route to the Plaza's fresh vegetable stalls piled high with basil, chicory, vine tomatoes and aubergines. A short distance away, a woman in her 70s sticks up for one of the few bookshops still trading: "We are afraid our city will become the Las Vegas of the Adriatic" she says, pointing to a single book that seems to be crying out from the window display ~ If Venice Dies by Salvatore Settis. It's to the voice of this former professor and director of the Getty Centre of Arts in the 90's that Venetians cling. Settis implores and challenges us with the urgent question: "How much longer can La Serenissima survive tourism?" 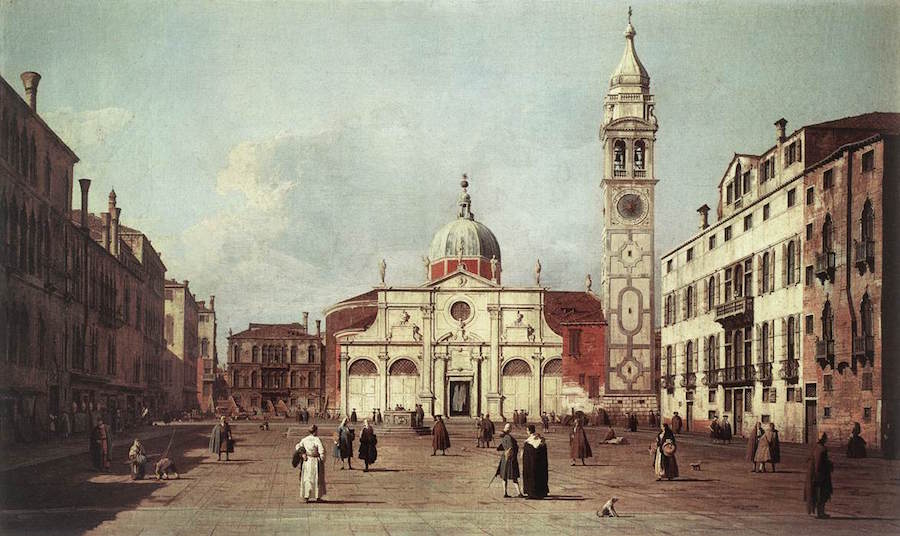 Cities, according to Settis, die in one of three ways. By enemy destruction (see Carthage, razed to the ground by Rome in 146 BC); by an invader force ousting the indigenous people and their gods (see Tenochtitlan, the Aztec capital, annihilated by the Spanish in 1521); or because the inhabitants of that city gradually lose their memory and their dignity and abandon themselves to a slow amnesia (as happened in Athens). After the glory of the classical polis, that of Pericles, Phidias, Sophocles and Aeschylus, Athens first lost its political autonomy, then its cultural initiative and then, little by little, having sleepwalked through centuries in its marble whiteness, saw itself devoured by darkness until nothing at all remained of its identity. Only in 1827 did it awaken again by dint of a coup of independence.

The facts should mobilise us against such oblivion. Venice hosts 28 million tourists a year. That's four visitors per day per resident. The toll of this has been the systematic depopulation of the city. Only once before has Venice suffered a decline comparable to the current one and that was during the bubonic plague of 1630. The number of inhabitants has gone down from 174,808 in 1951 to 55,000 today. Compare that to the 66,000 tourists per day. 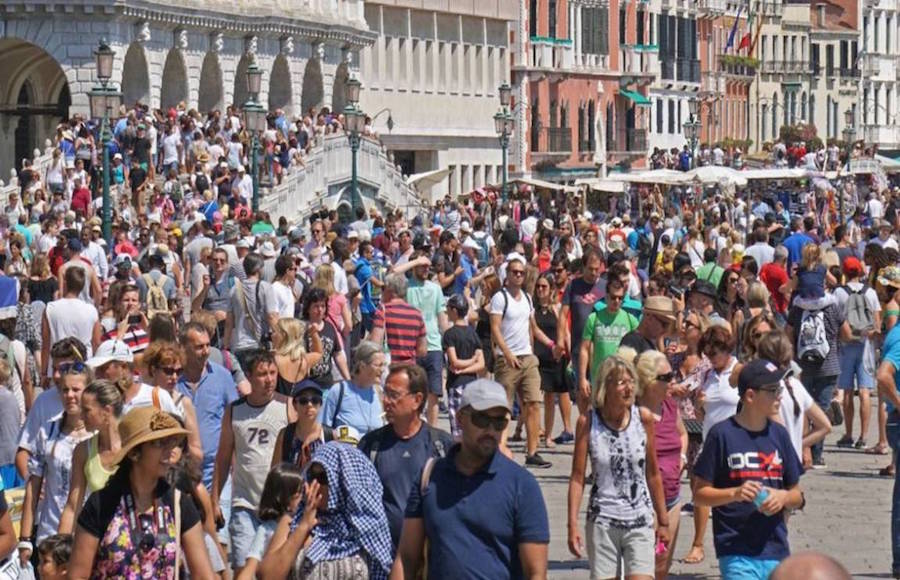 Venetians no longer want to live in Venice. Around 1,000 residents a year leave the city, a city with "the finest parlour in the world" according to Stendhal but which is becoming increasingly wilted and stagnant. Houses have become hotels. The proliferation of AirBnBs has meant a steep rise in rents. WiFi hotspots now outnumber the delicatessens that once sold prosciutto; the trattorias on the lively banks of the Zattere have closed down while young tourists in shorts and a rucksack crowd the bridges eating take-away spaghetti carbonara with chopsticks. Twenty years ago in the Rialto district, Venetians made their living selling each other fresh fish and artichokes. There was also a plethora of workshops making and selling Murano glass and masks to travellers who knew what they were buying and what it was worth. That Venice no longer exists. Nowadays, Chinese merchants sell Venetian masks made in China to Chinese tourists for one euro a pop.

Also now, while tourists queue for hours to go sightseeing at the Doge's Palace, the fascinating gallery exhibitions rekindling the glory of the city sit empty of visitors. John Ruskin's The Stones of Venice (Doge's Palace), Bellini/Mantenga (Querini Stampalia Foundation), Dancing With Myself (Punta della Dorada) and the 16th Architecture Biennial, to name but a few.

Venice, once the seat of great maritime and trading power, is in grave danger of being inundated by sea monsters weighing over 55,000 tonnes making their way up the Giudecca channel spewing out 1,500,000 passengers each and every year. The MSC Divina cruiser, for instance, is 67 metres high, twice that of the Doge's Palace. Every time one of these floating cities squeezes itself between the river banks, darkness obscures the alleyways and bridges of the Dorsoduro district, as if they were under a total eclipse of the sun. In June, some 25,000 residents took part in a local referendum, albeit without legal import, calling for a ban on these ships entering the waterways. Something quite unthinkable for the powerful lobby group of hotels, shops and rental agencies. In Venice, tourism essentially provides a living to 30,000 Venetians.

The debate has intensified since Prague, Amsterdam, Lisbon, Dubrovnik, Seville and Granada were likewise invaded by hordes of tourists. “Tourism-phobia is a cry of desperation by residents" insists the journalist Pedro Bravo in his 2018 book Excess Baggage. "We assume that the sum total of all tourist expenditure goes straight to the city in question but this is not the case. The tour operators keep between 40% and 50% of the money involved so the destinations hardly benefit at all but it is these latter who, nevertheless, are lumbered with the extra costs of policing, cleaning, hospitals and infrastructures". In the case of Venice, the situation is exacerbated by its island status and its size. 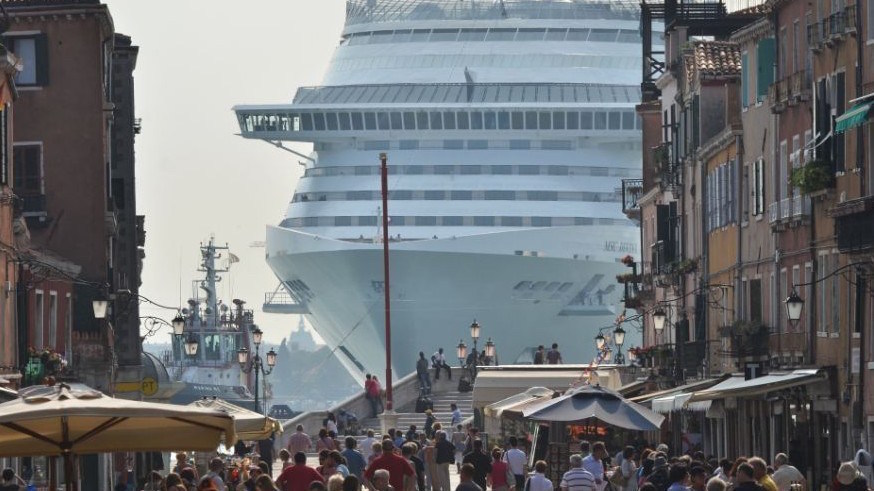 The Venetian lagoon is the result of fifteen centuries of human intervention in the search for a balance between its needs and those of nature. It is forced to defend itself against the tides that flood through the three entry points and sink it lower time and time again. Venice has been at times Byzantine, Austrian and Napoleonic. The Doge's betrothals were played out from the sea in a procession of gondolas and sailboats to the Lido on the Feast of the Assumption. He brought the body of St Mark all the way from Alexandria, buried it under the Pala d'Oro of the Basilica and established the lion as state symbol. 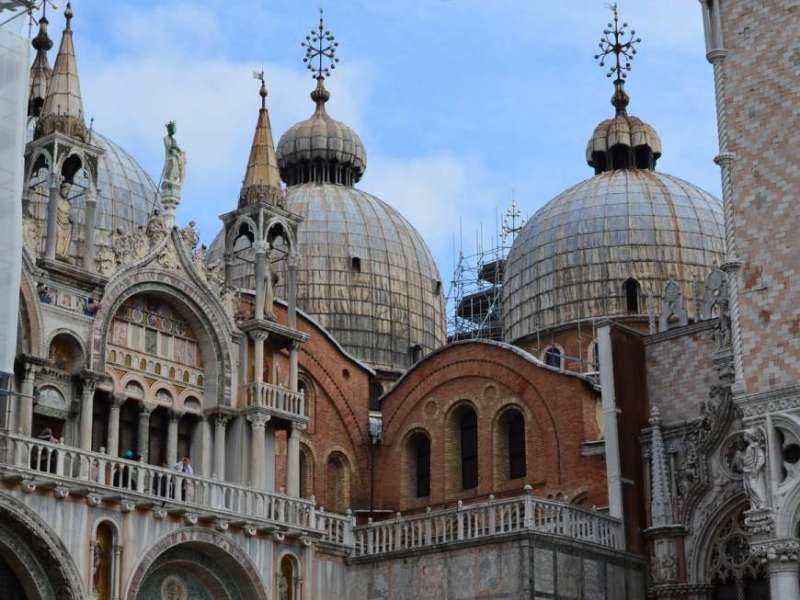 View of St Mark's Basilica from the Doge's Palace, Venice

“The city that baffles the world" is an interdependent, organic set of buildings, communication systems and structures. A tapestry of logical threads connecting art, history and tradition and that is how we should view it.

In his famous Plan of Venice of 1500, Jacopo De' Barbari was already mapping the latticework of secrets under the current of canals and the division of the city into six sestieri neighbourhoods, representing the six teeth of the "ferro", the iron fixtures adorning the black prow of gondolas. But La Serenissima is not just synonymous with beauty. Behind the so-called "Glory of Venice", there was a power without which we Europeans would not be the same people we are today. Venice is the syncretism of East and West, it's Marco Polo, it's the island that ignored feudalism, it's commerce, music, the Arsenal heart of the naval industry, the boats and ships, the saviour of the classics since the time of Plato and Aristotle. It's Petrarch, the Marciana Library, the Aldo Manucio press. It's also the Battle of Lepanto, the architecture of the Palladium, the paintings of Carpaccio and of Bellini and Titian, the San Rocco monastery decorated with Tintoretto's most celebrated pictorial cycle of paintings.

And so, Venice appears to us as an insistent set of reflections. Marcel Brion wrote of it ~ "Beauty doesn't make its entrance until that moment when one has nothing left to fear in one's life".